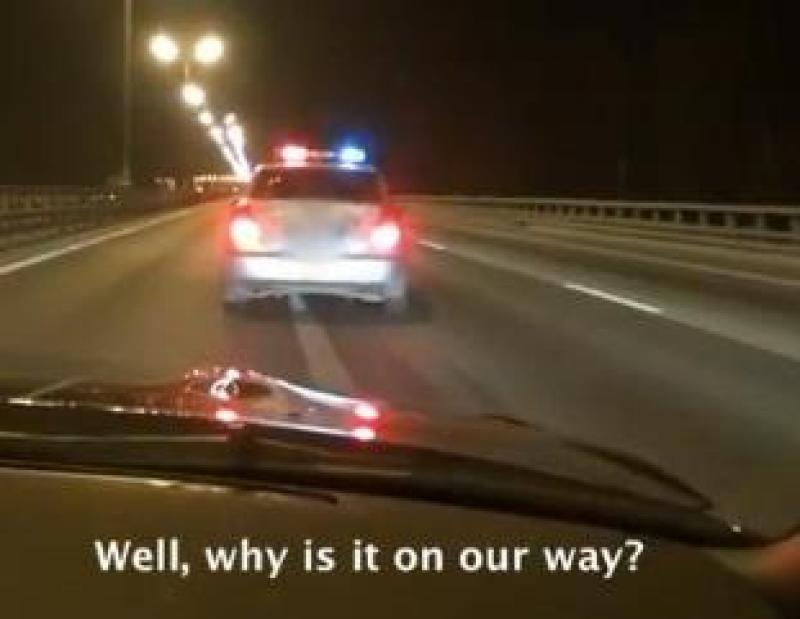 You've got to see these "dragtimes" videos where a group of reckless russian speed junkies are racing their overpowered (1000+ hp) supercars flat out on public road.

Police is not a problem if you've got enough money in your pockets. Russia is, arguably, world's most currupt country, certainly the most corrupt of ones I can think of. In Russia it would be unthinkable for a police officer to refuse a bribe or to fine someone who is close enough to the ruling mafia that runs the country.

Public safety is also not that terribly important - people is just one of those many "natural resources" that Russia has plenty of.

A few fatal plane crashes here or there, a few deaths in a 300 km/h car smash - that won't change the bigger picture, that's not considered a catastrophy. According to "them", not according to victim's families, not according to my moral standards.

If you're synical enough to disregard the tragedy and glaring unlawfulness of it all, this video is actually a great watch - as a car enthusiast I enjoyed it. God forgive me!

@ G: LOL, You're bringing up something I said months ago and trying to start an argument, how pathetic can you get? Yeah, I love my country, if you've got a problem with that, you can kiss both of my pasty white buttocks.

"but the United States of America is the greatest and most powerful country in the world, always has been since it was founded, and it always will be."

How old are you, 13? Maybe you're not aware, but in the 19th century, Britain was, by far, the richest and most powerful nation in the world. It's only since the 1950s that the US clearly emerged as number one, and is already showing signs of decline.

About plane crashes mentioned above... These guys are not the biggest danger over here. Same road, same spot, some 12 hours ago:
http://www.youtube.com/watch?feature=player_embedded&v=hEQdW6yS5o4

I think in Russia the police are thought of as good tax collectors rather than poor law enforcers!

I'm trying to stop making fun of other countries. I love The U.S.A and I'm positive that everyone on here loves their countries, ugly cars are fair game, though. lol

"Its a source of Information, not a Terrorist Threat."

Huh, tell this to Putin... bother him.

But Google isn't banned completely. They say it was a mistake.. say they are going to restore that.... Damn, what a morons.. Wisely said: "Think before you do something".. Seems Russian government just not able to think..

Why the hell would ANY body ban Google? Its a source of Information, not a Terrorist Threat. As far as the country itself, Russia, Im sure they dont get many tourists.

I don't think Marussia "Motors" will have a successful future.

Well, B1 is very impressive car, but just not worth that money (approx 165k $) with its tech data. Looks like a Zonda for a beginner.

B2 is just a show-car. Technically doesn't much differ from B1, and is priced with 200k $. And its exterior... damn... that looks like a smashed cockroach! Poor parody to Reventon...

They've made only about 30 units and no one is sold, as far as I know.

I'm with you on that, BR2, I hate governor chips, even if you never push your car to its top speed, its capabilities shouldn't be limited and as for censorship, many of the wrong things are censored. And Ganstersknowererussians, I admire your patriotism, there's a lot to be said for a man who loves his country, by verbally defending it, you weren't doing I wouldn't do. But driving that fast on public roads is extremely dangerous, highly unnecessary, and should be illegal.

...Censoring a show...because....the character was smoking a..Cigarette?....Umm, that is incredibly stupid..

Although, syaing that, Japans pretty weird with there censorship laws too, ALL there Sexually explicit material is censored unless you buy it from a shelf!...and there One Of 5 of the most Perverted countrys!..Very strange,

I hate censorship in all forms, good thing my country doesnt give a damaned about that kinda stuff, however, limiting cars is almost the same thing, Germany and its 155mph bullshite, even affecting Japanese and American cars, theres no point in given a car 300Bhp+ then limiting its capibilities, but since were talking bout Russia, there no Russian car worth mention other then the MaRussian Company.

A.Z is right, let's get back to cars, and all get along.

Do you know what they have come to? The government even increased the legal age of watching the cartoon called "Nu pogodi!" to 18+!!! A simple Soviet cartoon made mostly for children, when all USSR children were bringing up with it! The 18+ age is just because one of the main characters - the Wolf was burning cigarettes! Insane!

Damn, modern Russian censor is almost the same as it was in USSR, but without the communism. Seems that even worse than it was by the communism.

Russia has nothing to do with the winning WW2. USSR did the majority of the "work". USSR was the superpower and it was not consisted only by Russia. Not mentioning the contribution of the Allies in the WW2. Nowadays Russia is a joke, it's no more than resource colony for the developed world. In terms of War power it is nothing compare to the level USSR had.
And talking about freedom in Russia is absolutely stupid nowadays given the state of internet censorship there. The Russian government tried to ban Wikipedia, how stupid is that. If their politics are so retarded what can you say about the rest

If theres 1 Great thing that has come out of Russian AutoMobile History, it is WITHOUT a doubt, the MaRussia B1, Wonderfull car, wonderfull engine, nicely priced. you cannot find a better car to come outta Russia, not that there Autos are even big, but nontheless its a awesome example.

As for weapons, i believe Japan is in the Top 5 Most Impressive also, Not that i know shit about FireArms though, Weapons of Countrys that dont have a bullet or missile on them however....

Yes, because Russia won WW2 single handedly (sarcasm). We're talking about a country that couldn't beat Japan in the Russo-Japanese war even though they had THE strongest naval fleets in the world. Russia is notorious for wasting their resources.

Best weapons??? LOL! Germany, the US, Belgium, and Austria arguably make the best firearms in the world. H&K, Glock, Springfield armory, FN, etc. The AK is an excellent weapon, but it's a dinosaur by today's standards. And the AN-94 that replaced it uses a tiny cartridge and is entirely outclassed by its rivals.

Hmmm. Since this is a car website and all...

What exactly has Russia contributed to the automotive world again??? LOL

I'm apologizing, if someone has a grudge against me... This is my direct point of view.

@Gangster & Shaggy, Dudes, who are you kiddin? You guys have a Very Powerfull military, which nobody would want to go up against, but Russia is not the Most powerfull country, not even top 5, As for most powerfull, that would have to belong to (I Think) The Americans, as for best? NOBODY can say what country is the best simply because there is no best country.

And this includes the AutoMobile demographic as well, Id rather go into an Italian prison then a Russian one, thas for damned sure, every country has ups and downs, theres not a SINGLE oe that doesnt, but of course, "Most" people will think whatever country there from is the best, as with most cases.