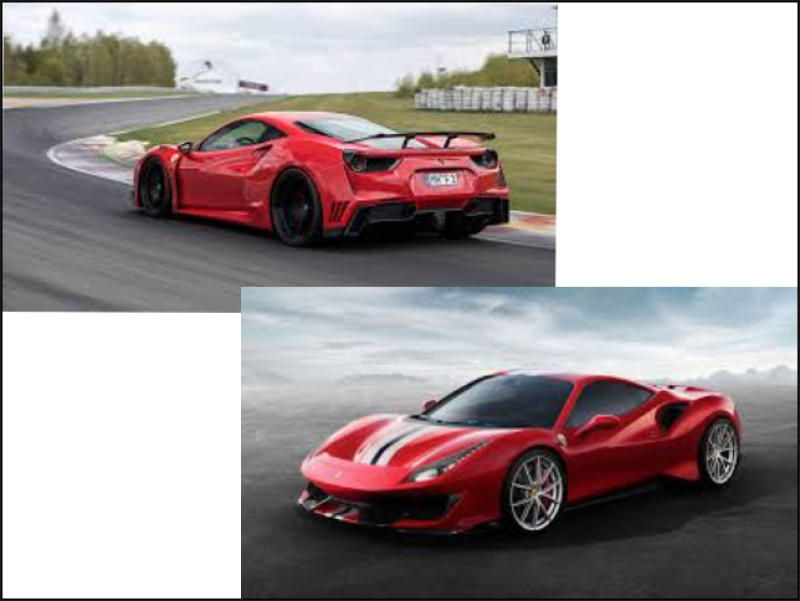 The 488 Pista, the replacement for the 458 Speciale with additional 50 bhp, more aggressive design, and better aerodynamics - is it really worth it?

The 488 Pista is equipped with the most powerful V8 in Ferrari History, but sometimes you could just do better - an example is the Ferrari 488 Novitec N Largo. It is more expensive, but it's worth it - Novitec adds additional 111 horsepower, yup, you read it right, it's 61 bhp more than the 488 Pista, and let's be honest, the Novitec N Largo does look slightly better than the 488 Pista.

Yes, the Novitec is limited to 22 cars worldwide but this shows that we have the capacity to make a car better than the original, and that we don't need to wait for a better version of the car to come from the manufacturer.

Final specs for the 488 Pista are out, and now we can do real comparison between it and the tuned rival from Novitec.

Aerodynamics
Novitec has a bigger rear wing, however the 488 has the intake on the hood which adds a lot.

Conclusion
With this comparison i conclude that both of them have around the same performance, better design and aero with the pista, more horsepower and actually more weight for the Novitec.

Now i didn't want to say that Novitec is better than Ferrari, i just wanted to point out this small thing, but now with the real specs we can see that there is only 12 bhp difference which isn't much.

Ferrari is Ferrari, its the holy grail of racing, (pls americans, don't start hating on this) But we have to say that with the old specs it would've been a disappointment to have the official ferrari have 61 bhp less than a tuned car.

Corvette C8 Z06 Spotted on the Street and Testing at the Nürburgring Nordschlife, and a Reveal Date as been Confirmed! 50

488pista is faster than huracan :)

I’ll compare it to other cars:

But this is when I realised:

The Ferrari 488 Pista has the same power to weight ratio as the Porsche 918 Spyder. That’s quite awesome. Obviously I’m aware the Porsche will still win in a straight line, as it has nearly double the torque, but the fact that McLaren and Ferrari are coming more and more into hypercar territory with their cars in a straight line is awesome.

It started in 2015, when both released the 675LT and F12tdf, which both have better power to weight ratio than two of Lamborghini’s hypercars, the Centenario and Veneno, and both would be quicker in a roll race. Now, the 720S and 488 Pista are entering deeper into the hypercar category. Even the 812 Superfast, having a better power to weight ratio than the Lamborghini hypercars.

It is worth it, but not because of performance. It's because it's a Ferrari :)

In times of natural aspirated V8 Ferraris the special versions had between 20-30hp more than the normal. The weight difference was around 90kg too. The Pista has 120hp more and the same weight compared to the Speciale. The 488 successor will have more hp than the Pista and it will be released next year. Since we have turbo engines everywhere the power creep is strong.

Let's see how the new trinity compete. The 720, GT2RS and Pista are pretty close on paper. This will show us how good the different car concepts are.

But to be honest numbers of Pista are disappointing (at least on paper). Only 50 hp more and only pathetic 90 kgs less than regular 488 GTB which is pretty comfortable and luxurious for a supersport car. 150 kgs less would be great but 90 kgs is almost nothing in my book if 488 Pista is hardcore and less comfortable/luxurious version of GTB.

If we talk about performance im afraid that Pista wont be even on 720S level. From the other side it will be propably more fun to drive and much better sounding supercar. It comes down to personal taste what car you like more.

I like Ferrari more than McLaren BUT tbh, McLaren SLAYS!! Ferrari guys are going crazy haha. They don't know what to do anymore. Whatever they come up with can't compete with McLarens haha McLaren needs to work on design and sound tho.

I wanted to add that even though it is better than the original 488, it still does not compare to a 720s.

there are big technological gaps in this text. In is pretty much obvious to get approx 20% more power from a reliable stock turbocharged engine, thus no surprise about novitec's figure, not sure about reliability under long term engine stress.
Ferrari, in its special series, usually showcase more advanced technology and do not necessarily chase maximum possible performance, at any cost. 488 pista engine apparently has been substantially upgraded, but not with the purpose of extracting
the highest power, but to introduce more racy components.

488 Pista will be an important car for a Ferrari brand. If it wasnt a damn good car it would be a large disappointment.

And honestly i would be surprised if it had "only" 720 HP for real...I hope that dynos show that engine of Pista makes around 5 % more.

From the other side many people say that these modern supercars (650S, 720S, 675 LT, 488 GTB ) are already too fast in straight line...Ofcourse it is a problem of rich people :) but i could agree with that statement and that is why cars like F12 Berlinetta, 458 Italia's, 991 GT3, Gt3 RS etc are still the best supercars for many supercars enthusiasts...They arent good in drag races but they have N/A engines with incredible sound, instant throttle response , great handling etc Many people dont really need 0-200 km/h in 7s. 10-11 s is enough for street car.

Perhaps isn't only a question of look and horsepower...
What about: less weight, more downforce, best electronic, ecc.
At the end the Novi one hasn't a clean look as the Pista , personal opinion.

now why would you go and expose her like that ? the poor cheetoss ...

There are mant SUVs on here. The SUV classification literally exists ...

Emelia Hartford is the Shaun King of Corvette drivers. A grifter ...

Funny how you use Racelogics name? But somehow missed more recent ...

so you're telling me she's another jamie chadwick boy lookalike with a missing ***** ...