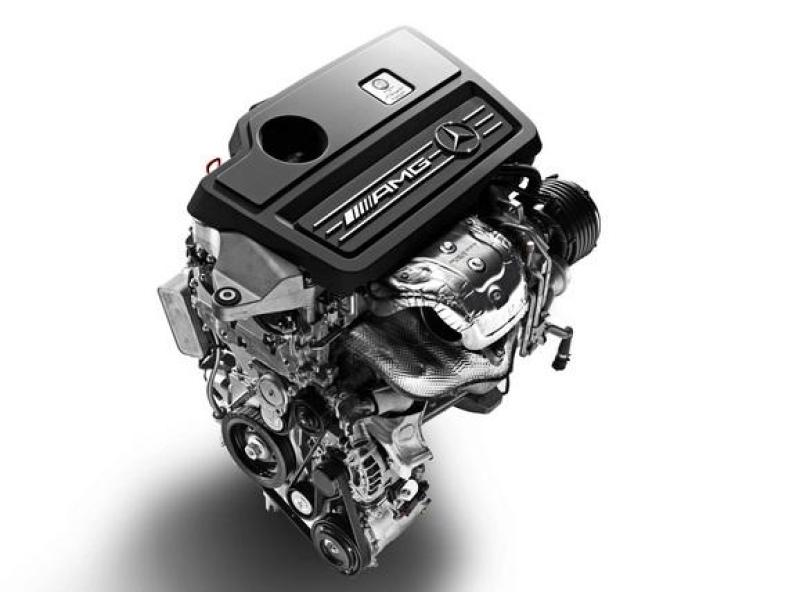 Could a Lamborghini Countach or Ferrari F355 owner in 80s and 90s predict that in 2013 there will be a family hatchback with a 2 liter engine bringing as much power and torque as a V12 or V8 supercar?

Mercedes new A45 AMG and CLA45 AMG A-class hatchback and saloon feature a brand new four cylinder engine by Mercedes AMG. It is based on 2 liter 211 horsepower M270, used in regular A250. According to AMG, the development of M133 was also greatly influenced by lessons learned in developing the 6.2 M156 and AMG's big V8 twin turbo engine the M157 5.5.

What makes this engine special and worthy of special attention, is the fact that there is no other 2 liter production engine in the world, which can beat the M133's record breaking 360 metric horsepower and 450 Nm of torque.

Not too long ago, this kind of power could only be expected from hard edged street racers like the EVO FQ400. Mercedes A45 and CLA45 AMG bring the same level of engine performance straight from production line, and with no turbo lag, poor economy, frequent maintenance or other drawbacks usually associated with high boost engines.

In fact, the only drawback I can think of is the 4 cylinder noise. As far as I can remember, there has never been an AMG 4 cylinder. AMG cars have always been as much about barking as they were about biting. A turbo four with modern day emissions and noise cancellation will never "bark" like some of the best sounding four cylinders (think E30 M3), not to mention AMG's V8s or V12s.

I also don't particularly like AMG's naming scheme which has lost all relevance to physical properties of the engine. AMG used to use numbers to represent engine displacement. This relationship was lost when Mercedes acquired AMG and messed up their own naming scheme, and decided to spread their new naming philosophy to AMG.

I would prefer if this A class would be called "A20 AMG" and "CLA20 AMG". But I guess Mercedes figured that "20" would be too small of a number and certain customers that don't know much about AMG or cars in general, would figure that 20AMG would be only one third as much of an AMG then a 63.

And there is another group of people that just love everything big, including big numbers. That's why Mercedes S500 in USA is called S550, for example. Not sure how this audience will react to a small car with relatively small engine like the A45. Regardless how fast it is.

SSC claims back worlds fastest prodiction car title, and all the drama surrounding it 26

I own an a45 amg edition 1 , and that car is awesome , every car in its class it destroys . Only the BMW m6 gave me a run other than that there's no competition on the road . I even beat a porche gt3 rs the video is on YouTube search " innovatech a45 vs " seeing is believing .

Wow, this 4-cylinder engine will smoke some 6-cylinders!

2014 Mercedes-Benz CLA45 AMG
These are some pretty impressive numbers...
http://www.youtube.com/watch?v=VZ7g8AtmYm4

@Fangio
If all drivers have DRS and KERS any time they press the button at 100% throttle you have a level playing field. It's the same as banning them but with lower fuel consumption.
They should ban drag produced downforce and allow enclosed bodywork and ground effect. This would give a allow a similar level of downforce with far less drag, more space for sponsors and more safety in a crash. Why they haven't done this I don't know.

"It would be better to allow the DRS system to be engaged anytime."

I think it would be better to forbid DRS and KERS. For example: Previously it was very hard to overtake a car. Today you only have to wait for a straight, then use KERS or DRS and you are by.

@Fangio Man
It's a shame that they are pandering to the environmentalists as the pollution caused by F1 is a teardrop in an ocean. It would be better to allow the DRS system to be engaged anytime.

Its good, but... who give a shit?
If the engine is realible, have a lot of usefull power and torqe from low-mid-to end revs its great, and desnt matter if it have 1.5l or 8 liters, i mass is good.

@jim86
I agree with you that 360hp has already been achieved with the Evo IX but overall the AMG is superior. It doesn't need any tuning to make 360hp, it's much more economical and hits full boost much sooner. Also emissions regs are nothing to do with car companies because to them they are a a game they all play along with! However they have led to the adoption of catalytic converters and particualte filters which are both a good thing. Mitsubishi are a small car company and I think intially they didn't want to spend the money to import and homolagate a model that sells in such small numbers. Subaru did and Impreza Turbo variants have always been available in the UK. :)

@Hamcee @Anonknowmouse
MY point is that this is not some feat achieved right now it could have been reality years ago but when jdm is to be put up against colossal manufacturers such as general motors and group vag which control the market you have to make your car comply with their standards and restrict it with lower output turbo setup. The so called tuning refers to peripherals and not the engine itself (pistons,valves,camshafts,etc).
Sorry for the long post i hope my point is clear now.

@Krillmeister87
The reality is in most of Europe petrol and diesel are around $8.50 per US gallon and even the middle class don't really want a thirsty petrol car anymore. The RS3 sounds epic but they aren't popular.

@fedja
Even though it runs 8.6:1 compression it spools by 2250rpm and makes more power and as much torque as the M135i engine which is 50% larger!
@Jim86
You need to read the posts we're talking about stock factory cars not modified tuned cars.

you should read the article first @jima.

it was all about a production engine, so your aftermarket bullshit doesnt count.

not to mention that it should be legal in one, if not the biggest market for cars.

sorry to disappoint but evos can do 420 hp with new intake ,exhaust and programing it's the european union that restricts this kind of performance as well as the european whim on comfort ride and fuel efficiency

@ Fangio Man: LOL, It sounds like a dustbuster! XD

Anyone else see this?

How the new F1-turbo-engine probably will sound like. I have to admit I am quite dissapointed. I want to hear engines, not the sound of a vacuum cleaner...

Fair point and therefore the figure eight is of little value in determining how ...

It should be understood, that MT Figure-8 is not a race track in the ...

if you read the article carefully, you'll see that 765LT laptime ...