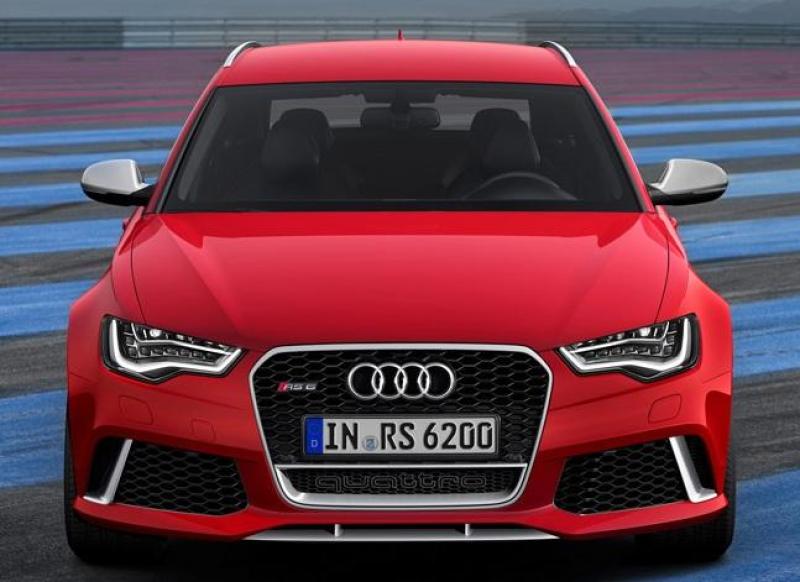 In typical Audi tradition, it's the wagon or "avant" version RS that is introduced first, before the RS6 sedan.

In very non-typical manner for Audi, this generation RS6 won't come with any power increase. In fact, it will have 20 hp less than the outgoing RS6.

As expected, the engine will be the same 4 litre twin turbo V8 unit that Audi use in S6 and S8, and Bentley have adopted for Continental GT.

In RS6 trim this engine will produce 560 metric horsepower and 700 Nm of torque at very low 1750 rpm. The latter figure is actually increase by 50 Nm, compared to the outgoing V10.

While less power is never good news, more miles per gallon always are, even for a performance oriented cars like RS6 or Bentley Continental. Increase in fuel economy is actually quite dramatic - Audi press release suggests 40%, according to European testing cycle.

Downsizing from the irrationally enormous V10 bi-turbo to a much more compact V8 also cuts a lot of weight. Outgoing RS6 was notorious for being a very heavy car for it's size and wasn't breaking any acceleration records even with turbo boost cranked up to 700+ horsepower.

This generation Avant is full 100 kilograms lighter which contributes to a 0 - 100 km/h time of 3.9 seconds. This is also in part due to more efficient powertrain with very responsive twin-scroll turbochargers and new 8 speed tiptronic transmission.

While none of the super sedans - German or American have reached the 600 horsepower milestone yet, both BMW M5 and the new RS6 are considerably faster than previous generations while, at the same time, consume and pollute much less. In this age of green and global warming, I think it's a happy compromise.

@ muse: Just quit while you're behind, you're embarrassing yourself.

@ muse: I don't know how old your are, I don't care how old you are, but I'm sure you're a great deal older than me, old enough to know that there are 7,000,000,000 living in this world, all with different opinions, and everyone is entitled to their opinion, but just because you have a right to your opinion doesn't mean you also have the right to try to force it on other people, you need to stop being closed minded and respect other peoples' opinions, like one of my former youth ministers once said, "Opinions are like buttholes, everyone has one, and they all stink."
"Audi is better than Mercedes Benz, BMW, Lexus, and whatever." That's a matter of opinion, not fact, everyone has their favorite make, just because it isn't the same as yours doesn't make them wrong. It is wiser to agree to disagree.

@ muse: LOL, the only comments I ever see you post on this site have little or nothing to do with cars, just insults, and you say I know nothing about cars. All I have to say to you is cry me a river, build yourself a bridge and get over it, or under it, since you're a troll. LOL, what a loser.

@ muse: LOL, everything will be just fine, just take one of your happy pills and ask the nurse to help you put on your straight jacket. Quite frankly, your desperate attempt at acquiring any kind of attention is pathetic.XD

Shut the **** up kid because the cars are abstraction for you.

@ muse: You must be a hopeless Audi fanboy, I never insulted Audi, now get off the computer, give it back to whoever you stole it from and get back into your cage you naughty little monkey.

Oh, no, someone insulted me!
@ Muse: Kiss both of my pasty white buttocks, you ignorant retard.

@Shaggy Audi is better than Mercedes, BMW, Lexus and whatever. You know nothing about cars and you are stupid kid because you are trolled be stupid troll easily.

Why even bother answering fanboys like that romTECH guy (gay ;) ?

@ romTECH: Audi is not gay, Audi is one of the best car companies today, BMW, Mercedes Benz, and Lexus I agree, are better, but not that much better, if Audi doesn't beat them, it sure as heck gives them a run for their money. If I had to choose between the 4, I'd choose Lexus, but the truth is, Audi rocks.

romTech. Do you want to be gay with me, i like too bmw and lexus.

With 600hp or without, audi is still most GAYEST car manufacturer. No comparison to the BMW, Lexus or Merc.

so based on this video i think RS6 might have around 600hp under hood, but anyway i like to see donno first :)

lol yeah talk about delusional. Are they part of the flat Earth society? ...

Even if the electric car marks 5 minutes, I don't think it's Tesla. ...

Some Musk fans believe it will break 5...

sorry. I got confused because sleepy.