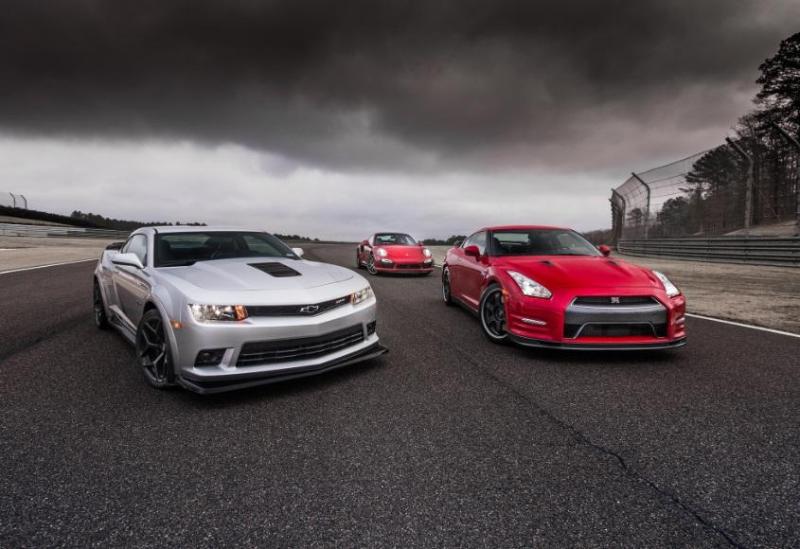 Strange things happen in the car world from time to time. Brands that were never associated with track driving, sometimes break the stereotypical mould and reach the most unexpected performance goals.

A recent Motortrend Head to Head episode presented a rather intriguing Chevrolet Camaro Z-28 and Nissan GT-R duel with a straight line and track test.

The straight line test was a little bit too "American" for this matchup - instead of a rolling start race, Motortrend chose the typical state-side standing quarter mile test, which, as expected, didn't bring any surprises and confirmed once again that Nissan GT-R is indeed a sub 3 second 0-60 car.

The track test was what I was hoping for and it indeed was delivered. All the criteria for a representative comparison were met, including dry conditions and professional racing driver - none other than the Motortrend's regular Rany Pobst.

I expected the Camaro to get very close to GT-R, since it does have very trick suspension, tyres and brakes.

I did not, however, predict that the muscle car would actually beat GT-R by 0.28 seconds.

It was interesting that for Randy Pobst the biggest highlight of the Camaro were the Pirelli Trofeo R tyres, which, according to him, gripped almost as hard as slicks.

In high performance RWD cars its always all about traction, it must be sticky rubber and good, clean road.
But sometimes its challenging and fun to battle for that traction of rear tires all the time.

I find it satisfying now in winter to play with that cold weather poor grip ;)

I'll try to be reasonable and logic for the people who never tracked the car on a difficult race track. Also that don't understand AWD and 4wd and RWD.

Whether or not Randy was biased, or mishandled GTR was not a question, there are experienced drivers who favored or good at handling certain types of cars, and not at some other cars.

If anyone who think GTR couldn't beat z28, and think he aint not fanboy, please go check out ATTS system of GTR, there's a reason why 918 uses AWD, and also the new M5 going to be as well.

RWD is fun and all that, but traction comes to tires. 4 tires traction is always going to be better than 2. Period.

GM will probably make a Corvette with the Z/28 Suspension at some point, the ZORA, its going to make things impossible for other manufacturers

Yeah that's a good point. The TurboS getting beat by a Camaro Z/28 had people complaining. But, the same results at LightningLap only further proves that it really is that fast. The article in Car&Driver also mentioned that through some turns the Z/28 matched the 918's lateral G's... Pretty incredible.

Still, my favorite thing about the Z/28 is that it's old-school performance. No DCT, natural aspiration, RWD, manual-only, etc... :)

Yeah, And it also beat the Turbo S with the same driver on the same day again, Contrary to what people believed about the last head to head test.

Though i would still have a Stingray or Turbo S over a Z/28, Its still uglier then a baboons buttocks, But i will admit, it has the same first impression as an Enzo, Thought the Enzo was absolutley horrid on first site, But the more you see it the better it looks, Add the Z/28 keeps looking better and better.

And the new gen Camaro coming up will be something else, I just hope they dont fk it up. Still though, 2:50 it VIR with 500hp and 3800lbs and a nice manual?...Awesome.

It's quite the beast. And to think it's getting a newer, more capable(and supposedly lighter) chassis in 2016. I can't wait to see how that turns out.
It's all just in time for the new Mustang which from what I've seen looks to be very promising! :)

Would be very interesting to see this comparison in some tests. I think it would be very close, and could be different results on various tracks.

@VECTOR The C7/Z51 is really quick, but I don't see it being as fast as the Z/28.
Especially considering that the Z/28 was able to lap faster than a GT-R Track and (991)TurboS and the C7/Z51 is about 2 seconds behind the GT-R Track(at Laguna Seca).
The Z/28 is all track-oriented and would easily outpace the more GT-oriented C7/Z51.

@ therealatimgamr... you troll youtube as if it's your job and spout some of the most idiotic conjecture on those threads.

Disagree lamboboy... the C7 Z51 is a damn quick car around the tracks. It would be close though. You need to look at some of the C7's track times and it's handling/grip metrics.

The GTR fan boy butthurt is real in some of the comments below... 'give the GTR better tire and aero and see who wins'... really? The cars are same weight, the GTR has the hp advantage, AWD, and a damn dual clutch tranny. GTH over it. The Z/28 did what it was meant to do on this short track. Can't wait for the crap that gets spewed by the GTR fan boys when NISMO gets to tackle the new Z06.

You should compare a finished cake to cake batter......

@Northern... "US driver and needs more runs to make adjustments"

I bet you wouldnt be spouting bs if the car wasnt American, A GT-R may be faster, But on that track it wasnt, Cant say with only one lap to compare the 2 cars with

this test is similar to the one a few years back with the boss 302 at laguna vs the m3, US track with US driver and needs more runs to make adjustments. truth is that the GTR is 13 seconds quicker at the ring over the z28. very biased as usual from the American car press

I was also gonna mention them being sold out, Its almost hard to believe, But i still maintain this should have been $60,500 and $75,350 filly loaded with extra options such as Matte paint race seats, re creature comforts and less tracky tyres as an option.

But I have to ask, are people really buying this car? Especially considering its price tag?

Base Corvette is not faster than the Camaro Z28 around race tracks. The Z28 has much more grip due to downforce and Trofeo R tires. Straight line performance might be similar