9 Car prices are "out of control" 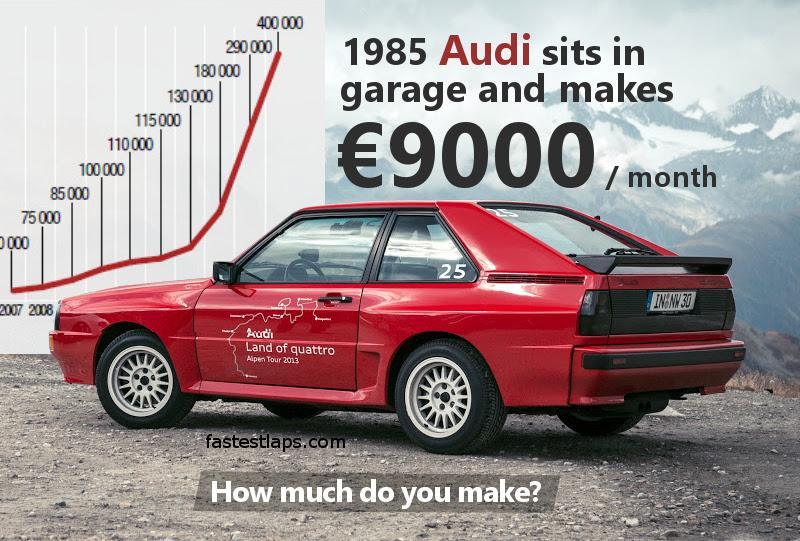 Used car prices have risen so much, that it really is starting to look like a "big, fat, ugly, bubble". And yes, I lower myself to using "Trump-lingo" - desperate times call for desperate measures.

Limited production car like this with Group B pedigree was never going to be cheap. In 2007 buyer in Germany would pay approximately €60,000 ($80,000) for a good, original Sport Quattro - respectable money for 22 year old Audi and enough to buy a brand new BMW M3.

According to Auto Motor und Sport, today you would have to spend nearly half a million US dollars for the same Audi - that's approaching 700% increase since 2007 and almost bitcoin-like 120% spike since 2014.

If you own classic cars or trade in high value used cars, you must have done really well. For the rest of us it is just more bad news.

When 1980s Audi can sit in garage and generate more money in appreciation then you can generate working you heart out 9 to 5 every day, that's discouraging and enraging.

For average millennial there is almost no chance of becoming a home owner in United States or western Europe where property prices have diverged wildly from average income of working class. You cannot expect to become a home owner if you do well in school and find a good paying job. Property ownership is reserved for born-rich and few lucky ones who start successful business.

Soon same will apply to cars - it will be privilege to own a decent car. You can argue that this already has happened as the idea of buying a new car straight from showroom already seems far-fetched for most in the young working class, including those in highest paying professions.

Used car market always was the equalizer - it allowed people of modest means to still have nice personal transportation - just few years older and without latest "bells and whistles".

I am afraid this is about to change, and average-to-low income population will be restricted to trains, buses and dystopian, self-driving public drones.

All the Automotive-Related Events Killed Due To COVID-19 137

How efficient will plug in hybrids be?

Why only manual transmission? 9

32 price has been high for some time. I never see them on the road over here. Same goes for last gen Supra or R33 and R34. All of them cost a lot. Even old EVOs go for crazy prices.

Saving is never a bad thing, But cars like this that offer "That" real driving experience are getting rarer and rarer, Theres a reason why Manual Porsches are skyrocketing in prices. Definitely not worth it in my opinion as its a waste, But people are making profits on it, Although if you have enough to blow on a Million pound car why do you even need more? Its a shame that people buy these great cars and just keep them in a shed and not use them as they were intended. Hell R34s are still going for there full price today, And ill be damned if i sell mine, I actually use mine as intended, But its still crazy that certain cars are just making THAT much.

Stocks have sucked for 2 years now. At least the ones I track.

well... saving up money isn't neccesarily a bad thing in this market. I still prefer stocks and properties over art/cars/etc. I believe cars should be bought to be enjoyed and not put in a garage under covers. And I can't enjoy a car if I feel like I'm burning away money... so the sports cars of 6-10 years right now are great.

I don't know if it's more ridiculous than Audi Sport Quattro at 400000 eur. It probably seems more ridiculous to you because you have been around those cars years back when they cost nothing. It's similar for me - although I don't'recall seeing the short wheelbase Sport Quattro, I do recall times when 80s Audi Coupes (same body basically) cost like ~300 euros... :D Not in concours d'elegance condition of course, but still...

R32 price has been high for some time. I never see them on the road over here. Same goes for last gen Supra or R33 and R34. All of them cost a lot. Even old EVOs go for crazy prices.

Even my R32 GTR seems to have quintupled in price since I bought it. And now free of UK road tax.

Once another financial crisis hits, these car prices will plummet fast.

Unfortunately, I don't foresee this bubble bursting any time soon. US dollar right now is very strong (overvalued?). When trumpflation really kicks in, these crazy prices will only get crazier.

If you'ŗe working on constant salary or if you're a saver and hold on to your money, you will continue to get burned.

Question is, The people buying these cars, Are they keeping it and using it to enjoy like it was intended? Or are they just selling it soon after for profit? I personally think its stupid to pay 70k for something like this, Not when you have great cars of today you can purchase, Sure they make have less pedigree most of the time, But so?

These things are becoming stupid. Sure u could argue it's like an art piece. But they are luxury non-essentials. fundamentally, newer cars are getting better in most ways, except driver involvement. Once another financial crisis hits, these car prices will plummet fast. But the price of a new BMW won't change

22b is far more special

when will ynw melly get out ! cus ynw bslime is ...

You Europeans may laugh at big off-road diesel SUVs, but when the world ends, ...