86 Cr Or Coefficient Of Rolling Equation 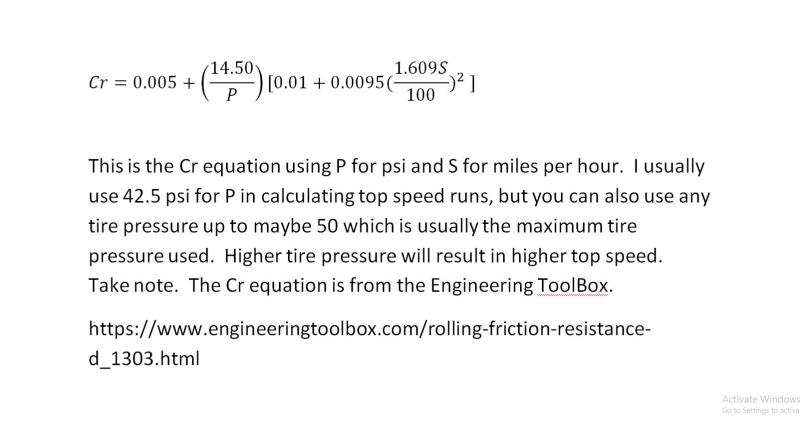 Instead of the standard 0.010-0.015 commonly used, I use this equation for my calculation. However, using this equation will result in lower top speed compared to the standard lower numbered ones. P is psi or pounds per square inch, and S is miles per hour. I usually use 42.5 psi for top speed runs. Using lower tire pressure will result in lower speed, higher tire pressure gives higher speed.

Thanks for sharing. There's one problem with that formula though:

It's an approximate formula for H-rated tires (normal tires for road cars). However, sports cars have Y-rated tires, which have a higher rolling resistance from the get go, but a less dramatic increase of rolling resistance with increasing speed - says Michelin. Hypercars in the 400kph+ range even use reinforced compound, which is even more "resistant" to speed than Y-rated tires.

Unfortunately, I haven't found a source providing actual numbers to Y-rated tires (who cares anyway, they're mounted on like 1% of road going cars :D). An alternative formula comes from "Essentials of Vehicle Dynamics" by Joop P. Pauwelussen:
https://www.directupload.net/file/d/6190/ztiwcdtz_png.htm

Really problematic is the calculation in the 400+kph class, because nobody really seems to have written a professional work about it and there's quite some unexpected stuff going on. Koenigsegg for example measured the tire temperature during the Agera RS top speed run expecting a vast increase with speed. The funny result:

The tire temperature increased (which increases rolling resistance), up until shy above 400kph, then it DEcreased due to the sheer cooling the wind provides at that speed, lowering its rolling resistance comparatively to the "normal" curve in relation to speed.

It's really a shame that in contrast to wind resistance, rolling resistance isn't more specified.

it does look badass.

Changed. When I initially listened to it he used the word ...