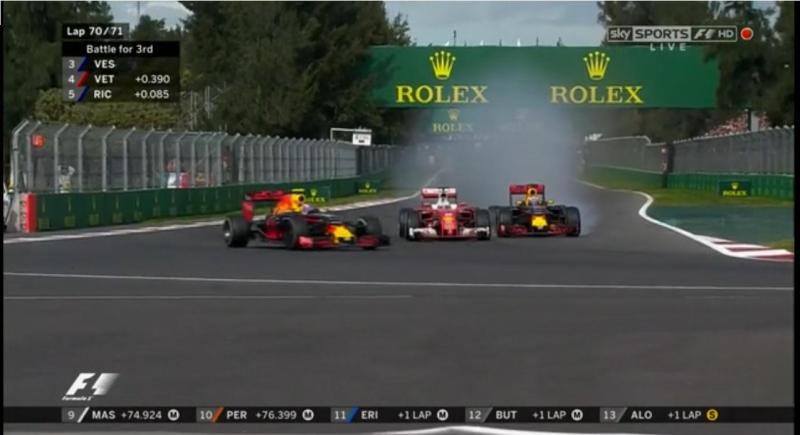 Just when you think Formula 1 is never going to match MotoGP in drama and unpredictability, you get a race like this - the Grand Prix of Mexico 2016.

From the large crowds and filled grandstands to Sebastian Vettel dropping the F-bomb dozens of times over the team radio (even towards race director Charlie Whiting), to 3rd place trophy changing hands twice after finish - first Max Verstappen then Sebastian Vettel and, finally, Daniel Ricciardo.

What impressed me most was not the drama, accusations and antics of the drivers, but rather the speed that late 2016 Formula 1 cars can now generate. Williams Mercedes driver Valtteri Bottas came within 0.1 kph of beating all time speed record for a Formula 1 race, which was 372.6 kph / 231 mph for Juan Pablo Montoya in 2005 Italian Grand Prix in Monza.

I haven't looked at speed trap data for other drivers, but I assume this was not a deliberate attempt at speed records for the sake of speed records. Had team Williams known they would get so close, they could have instructed the driver to deliberately brake later to get the extra publicity which certainly wouldn't hurt the team and sponsors, even if this would end up in flat-spotted tyres or a little excursion on the grass.

Next year new regulations come in play for Formula 1 and these will, no doubt, make cars much faster in absolute terms. It is likely that these changes won't increase top speed, as most are geared towards increasing downforce and grip and engine power may remain largely unchanged.

I like his swearing when lapping cars and Kimi does it too - Ferrari is the "team rude" this year. And I don't have any problem with that. Its entertainment.

F1 needs this kind of stuff. Emotion and fire.

Next year Red Bull will be able to beat Mercedes finally. Cornering speeds will be outrageous. Like 40kph more. And we all know Red Bull is the best at downforce. Ferrari on the other hand is going to play it safe again. Decent engine, decent aero but won't come close to Merc or Red Bull. Sad

@Hoppelmoppel123 can you add the below cited NM figure? Please! ...

I was hoping it would have been instrument tested and verified ...

Oh dear! The next "LaFerrari" replacement will NOT have a V12 engine, at all! ...

Gotta agree with you, that just sounds insane. Even with that electric power it ...

I should have worded it better. But>   It's a manufacturer one. Like Rimac ...

I haven't watched any Leno videos for half a year so I need to ...

With respect. Absolutely not, and how could you of known 5 ...