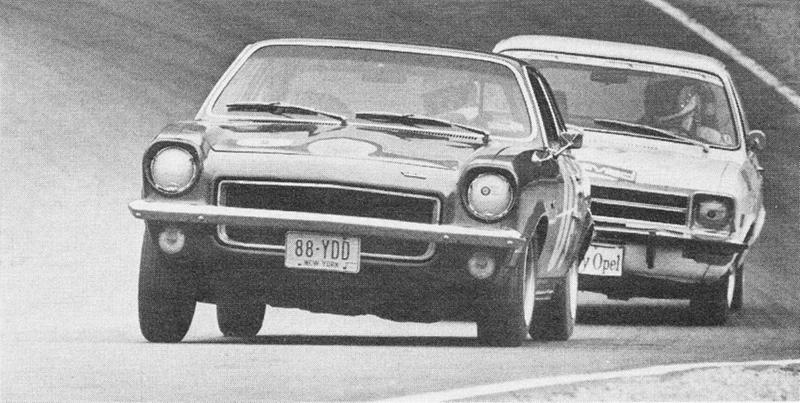 Car and Driver January 1975, CD's Patrick Bedard reported in his editorial on October 12, 1974 he piloted their '73 Vega GT #0 in Car and Driver's SS/Sedan Challenge III and had just edged out an Opel to win the race. He said, "The lone Vega outran every single Opel, Colt, Pinto, Datsun, Toyota and Subaru on the starting grid. From the summit of the winner's platform I could see the car in the impound area, a metallic bronze coupe with a big yellow zero on its battle-scared flank. I had driven it there after the victory lap, the tech inspectors pushing it off the scales probing under the hood, looking for the secrets of its speed. It had done the job-this Vega GT faced off against 31 other well-driven showroom stocks and it had finished first." "Five laps from the end I discovered that once the tank drops below a quarter full, the fuel wouldn't pick up in the right turns. Twice per lap the carburetor would momentarily run dry. And if that wasn't bad enough, the temperature gauge read exactly 230 degrees (detonation point) and a white Opel was on my tail as unshakably as a heat-seeking missile. But it was also clear that no matter how good a driver Don Knowles was and no matter how quick his Opel, he wasn't going to get by if the Vega simply stayed alive. Which it did. You have to admire a car like that. If it wins, it must be the best, never mind all of the horror stories you hear, some of them from me."

You are retarded as fornicate.