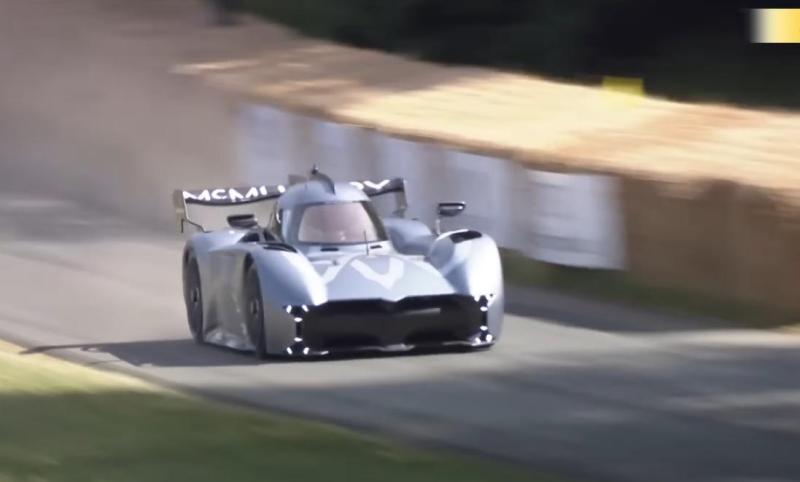 This year, unlike last few, which were plagued with covid-iotism, we had a new challenger for absolute track record at the hillclimb route - McMurty Automotive Spéirling.

The defining feature of Spéirling is active aerodynamics, not movable flaps or retractable wing, but "active aero" in the most direct sense - downforce generated by the car itself, irrespective of speed, via two large suction fans integrated in the floor.

Driving fans that generate 2 tonnes of downforce comes at cost of reduced range. Spéirling would likely run of juice after few short laps and would not be able to complete single flying lap at Nürburgring.

Needless to say Spéirling is not a production car and is not road-legal in any country, so don't expect fan cars in Fastestlaps.com leaderboards any time soon.

One more interesting "side effect" of fan cars is potential for next level acceleration - specifically launch. Downforce generated by the fan prevents wheelspin. Apparently this car does 1.4 to 60 mph. Nothing can match this. Nothing without a fan or thruster engine (jet engine). For jets its also tricky to generate super fasf accel from standstill (jet power goes up with speed).

I dont know how many Gs is 1.4 to 60mph but it should be approaching unhealthy levels. Proper head/neck support mandatory...

"Spéirling would likely run of juice after few short laps and would not be able to complete single flying lap at Nürburgring."

Actually given that they claim that it has a 800V-plus, 60kWh battery pack which will give 30-60 minutes of track time it's possible that it can do two laps of the Nurb albeit with reduced power. Maybe we'll see it there sometime?

Could you add some of the shootout times like M4 CSL and GT2RS?

not the biggest fan of electric cars, (pun not intended), but this is the coolest electric car i've seen yet. Properly respect it for being a pure engineering exercise from a small company that might really be even faster than any Formula 1 car on this course. 1.4s to 60mph. while normal race cars build revs at the start line before launching off, this thing builds fan suction downforce.

Oh dear! Sorry to hear that! Love the car!

BUT the stand out car for me INDIVIDUALLY, based of a whole multitude of things, and quite surprisingly even to me right here right now, with amongst other things interactions with the wider team is>

The Hennessey Venom F5! An absolutely devastatingly capable production hypercar! The United States of America can be absolutely proud along with the engineering carried out here, on this beast of weapon!

Having said that, my focus is on the other project from those shores, but that doesn't take away from this one! At all, in fact it deepens the respect I've have for either!

This is the King.

Well again Worse tires than that too