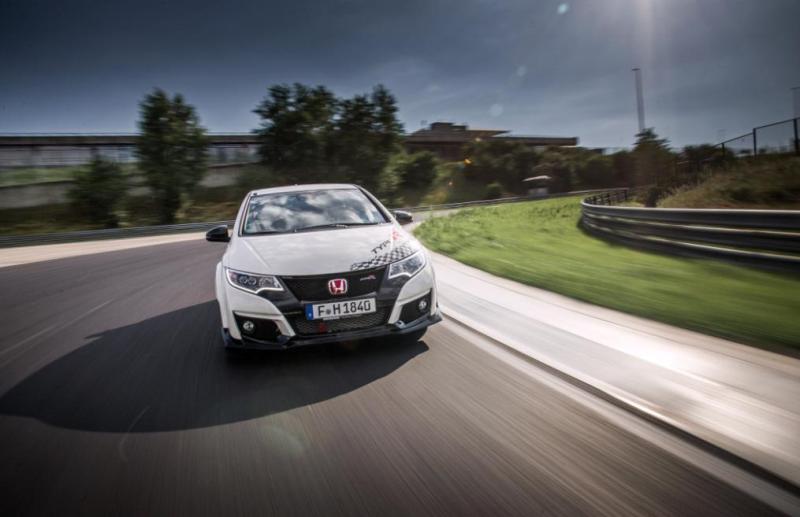 While Silverstone time was recorded in track configuration previously not featured on FastestLaps.com, and Estoril, Spa and Monza are not yet well represented by FWD production cars, Hungaroring time is definitely a stunner - faster than every single lap on garazs.tv (including one with Mercedes SLR McLaren - standing start, perhaps?) and just 2 seconds slower than 730 horsepower Ferrari F12.

With such momentum, one might expect Honda to eventually return to Nurburgring - this time with a Civic Type R in production trim. I would prefer to see VW Group and Renault pick up the gauntlet and challenge some of these 5 laptimes outside of Germany. Maybe this would start a trend of car manufacturers diversifying their lap-timing efforts across Europe, instead of concentrating only on Nurburgring.

Below are on-board videos of all 5 lap records. Honda claims car had no modifications and same OEM Continental 235/35 R19 tyres you will get in a Honda showroom.

Havent they always been fast?

Considering the amount of hype on this car, You dont see much of it..An i think Honda has lost there ways with the new Type R.

congrats Honda to 5 total worthless laprecords..no one seriously test FWD on the 5 tracks they choose... Hungaroring was used for track tests some years ago but with a different layout resulting that the 305hp Focus RS is over 10sconds slower... seriously Honda?
At Tsukuba the Type R wasn´t able to beat the Renault Megane RS in the hand of japanese race drivers and it failed to beat the old Honda Civic Type RR Mugen... at Suzuka the Type R beat the Megane Trophy (30hp down on power) by one second and that mainly to a huge drive mistake by Mr Driftking Keiichi Tsuchiya in the first corner with the Megane were he went much to fast into the corner completely lost front axle grip and run extrem wide... in the technical midsection the Megane beat the shit out of the Type R
At the Hockenheimring the Type R got owned by several FWD cars inluding Golf GTI Clubsport S, Megane the normal GTI Clubsport and RCZ R...

Can´t stand this usless PR gimick from Honda... set laprecords on tracks with tons of testing like Hockenheim, Anglesey, Sachsenring, Tsukuba, Laguna Seca, Vairano, Willow Springs etc. and I would call me impressed...

Well yeah, The Type R wasnt stock at the ring

Well, "not stock" is a slighly harsh expression. It implies it being "artificially" better than stock. But, as far as I know, it was a pre-production test mule or a pre-production prototype ("mule" sounds too Frankenstein), and that could mean anything - even that it was slower than production version.

Either way, it was not the exact end product that you and I can buy, therefore, it is not on the list.

But my God is that weird to have a name of a place start with double "l". Maybe that's why they didn't mention it lol

the speedo on the nordschleife was probably inaccurate. i compared it to the video of the gti clubsport s. on the straight they reached about the same speed while the speedo of the gti showed 150mph if i remember correctly.

Well yeah, The Type R wasnt stock at the ring, Hell during that mile long stretch it hit 169 i think? Which is its top speed, I think, Not too sure.

Istanbulpark fwd record also belongs to Honda. I don't know why they didn't put it in the list...

is it me, or these videos show the civic accelerating a LOT slower than say... at the nurburgring. It's like, anything above 160kph is tough for this car. From 190-200kph it takes like several seconds, yet at the ring, it easily got from 200-240. Good for Honda trying to push for more lap records, but just shows how much they cheated at the ring, and how much understeer their car has.