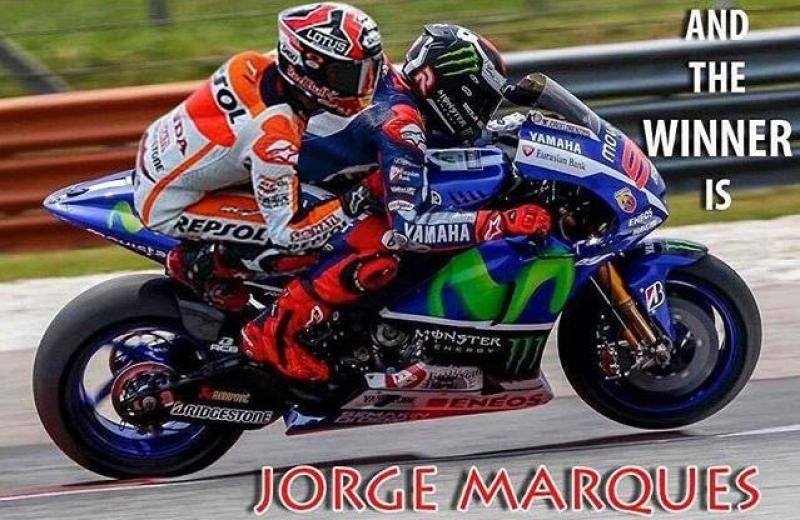 Congratulations to Jorge Lorenzo and his fans for victory in one of closest, most exciting championships in MotoGP history.

Due to unfortunate events in Malaysian GP two weeks ago, championship leader Valentino Rossi was penalized with last place grid penalty. Despite that, #46 managed to run a masterful race, finding way around 21 riders and finishing 4th, just after the two factory Hondas and his teammate Lorenzo.

Rossi did everything he could and it was down to Honda riders to overtake Lorenzo, if Rossi was to win the championship.

In final laps Lorenzo was slowing down, and Dani Pedrosa from 3rd place managed to quickly erase a 2.5 second gap and catch up to the leading duo. Marc Marquez, however, rode close to Lorenzo for 28 laps and did not attempt a single overtake manoeuvre, even towards the end when Lorenzo was running out of grip and struggling.

To me it was obvious that Marc Marquez made a conscious decision not to challenge Jorge Lorenzo and make sure the world championship title stays in Spain.

The fact that Pedrosa was able to catch up so quickly and attempted to overtake them both at the same time, clearly proves the point.

While it was satisfying to see Marc Marquez and Jorge Lorenzo getting "booed" and whistled at the podium, it has to be said that on racetrack Jorge Lorenzo did nothing wrong and rode like a champion throughout the season. There is only one man responsible for the disappointing finale of the season, and I am sure you know who he is.

With help of Marc Marquez, Jorge Lorenzo got his 3rd title and his name in history books, but Valentino Rossi got more respect, more fans and more victories and podium finishes to add to his "hall of fame" record.

Are cars really handling that much better or is it the tires? 3

The Czinger 21C is coming 9

"Yeah man, Marquez should be in jail for hitting Rossi with his break. C'mon..."
maybe not in jail, but rather on tarmac...

Dude grabbin another dudes ass......Just threw up in my mouth a little bit.

Yeah man, Marquez should be in jail for hitting Rossi with his break. C'mon... 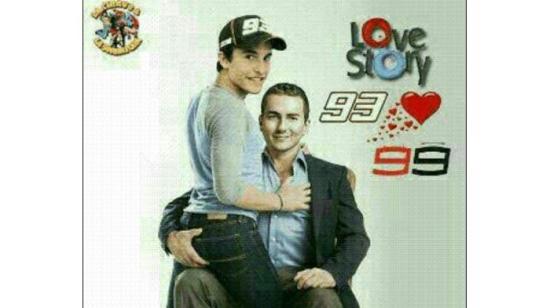 But I must admit, they do look fabulous!!!

Thats why if your in a car...Nobody can kick you off your seat..

You don't want Marc Marquez in a car. Trust me. There would be havoc. People would die.

"You post have no sense. Valentino kicked Marquez. What would you do if you were Marquez? Let pass Valentina? Like Pirro and all the italians and Yamahas?" valentina? who is she ? your girlfriend? did you have your sight checked lately? marquez obviously ran into Rossi, and fell because he hit the brakes while doing so. Rossi was forcing him out of the corner's ideal path and had the right of doing so since he was ahead and could choose the path he wanted.Rossi's knee bent AFTER marquez hit him and was already falling, there are dozens of videos showing this on youtube only.But evidence does not matter for you. You are just in total denial, making your opinions just on grounds of riders' citizenships.

See, Thats why if your in a car...Nobody can kick you off your seat..

You post have no sense. Valentino kicked Marquez. What would you do if you were Marquez? Let pass Valentina? Like Pirro and all the italians and Yamahas?

So the infringement is worst or better if you're the leader or you're not? Rules are rules. Let me say it's fantastic to debate with you all with no disrespect guys.

Ok, good point. So is it unfair competition when Rossi is punished with only 3 points, and in moto3 you get a black flag for almost the same a week earlier? Do you understand Lorenzo's fans when they asked for a harder punishment? They say it was only 3 points because it was VR. Hey, I said I'm a Rossi fan and wanted him to win, but not this way.

Probably Marquez should have waited for him, cut his line and give him a kick . It just costs 3 license points . As he use to say, "this is racing".

Only if Marquez was championship leader and Rossi was intentionally ruining his race with countless dangerous overtakes.

xavier, you don't understand that this is not about accepting loss. It is stupid to suggest that "you just have to learn to lose" when someone beats you in unfair competition. That is just demagogy.

If this is what you understood then there's nothing to talk about. Rossi should learn to lose. That's it. He is no angel. Probably Marquez should have waited for him, cut his line and give him a kick . It just costs 3 license points . As he use to say, "this is racing".

"If you say that Rossi is not the Champ because Marquez didn't do his job,then you're saying that Rossi could not win the title by himself " hardly have i read a more ridiculous statement. so, according to you, a REGULAR championship would be: each on his own until mid-champ, then, if spanish pilot X is the first among spanish riders, in each of the remaining races all the other spanish pilots drop behind rider X by the finish line.
If the other spanish riders beat rider X in the last races, that means helping Rossi and would be ill, unethical practice.But LOL, are you serious? so, had marquez and pedrosa passed much slower lorenzo in the last few laps, that would have been rossi bribing spanish riders.Fact is that dorna and FIM is just a pure spanish connection, with no less than 4 ****ing races in the country, whole dorna is spanish, always spanish's stewards...ridicolous. italians as usual let things happens, just for complaining afterwards...pathetic

Let me say that I think you're right about Marquez but, going again to the begining,this wouldn't matter if Rossi was quicker than the rest. It didn't matter when fighting with Gibernau, Hayden, Stoner or Biaggi. Rossi was simply the best, and nobody could do nothing about it.

Sorry, but that is just an assumption, in my opinion. Marquez won 2 races ago , overtaking Lorenzo in the last lap. If you say that Rossi is not the Champ because Marquez didn't do his job,then you're saying that Rossi could not win the title by himself . Does he need Marquez's help to win? I think he should not. Just has to be faster than the rest. I wanted Rossi to be the Champion (before Malaysia) but I was affraid that he was not able to win the title. In the last races he just tried to lose as few points as possible cause he was not quick enough.

Both are douchebags! Rossi for talking too much, running down a kid, and then get beaten by the kid.Marquez for toying with a grandpa, and got his butt smacked. Lorenzo for being such an arogant piece of ****. Wait that's more than two, no?

Pedrosa's the only sane rider out there. The other three are crazy... Then again, I guess you need to be a bit cuckoo to win a motogp championship. This is Senna vs Prost, So just enjoy it while you can.. This is more than just a sport.

Inability to click on dr. cosimo name and bookmark his profile. ...

this should be f40 LM, not road legal.

This car is so heavy, it does’t have too good power/weight ratio but it ...

If they'd included Track performance, Lighting would have Bolted past !