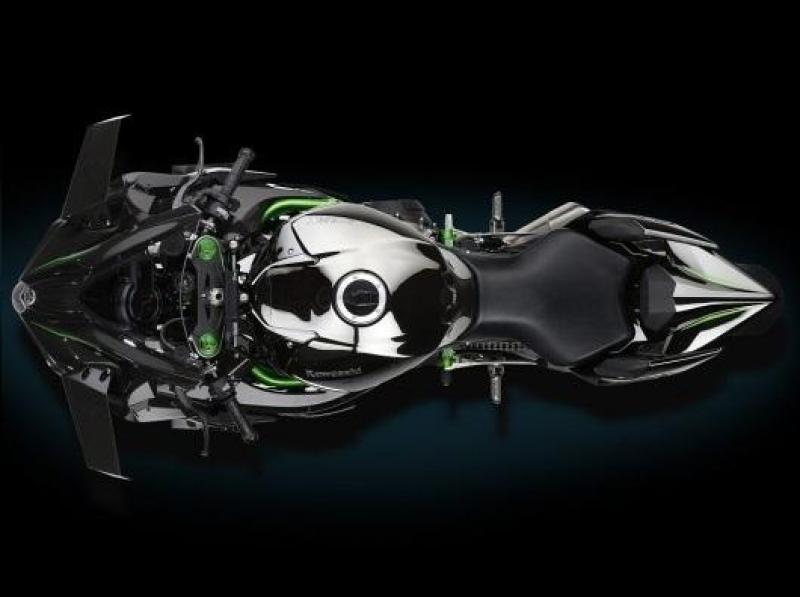 Back in the early two-thousands when Ghostrider videos where all the rage, Suzuki GSX-R 1300 was the undisputed high speed king.

Fairing shaped by wind-tunnel data and engine with 170 horsepower in a time when anything north of 100 was either a supersport or flagship sports tourer.

When few years later Kawasaki rolled out the ZX-14 with 190 horsepower, it seemed almost inappropriate for motorcycle manufacturers to be flirting with the "200".

Improvements in metal working and precision engineering have allowed engineers to design reliable engines with much greater power output than 20 years ago. However, for better or worse, almost all modern superbikes have not exceeded the 200 horsepower threshold.

Perhaps it takes a major precedent to start the ball rolling, and this precedent may very well have arrived in form of the Kawasaki Ninja H2 - a new flagship supersport due to be revealed tomorrow.

The H2 is a street legal twin of the recently revealed H2 R track day bike.

The H2 R is a game changing motorcycle - it is the first production street bike, to my knowledge, with forced induction in form of a supercharger. Kawasaki claims this bike will also be the first to kick off what they call a "hyperbike class" - a two wheeled analogue for the hypercar class, currently populated by Ferrari LaFerrari, McLaren P1 and Porsche 918 trio.

It remains to be seen if the street legal H2 will inherit the full 300 horse output, or if the emissions requirements will force Kawasaki to turn down the wick a little bit. Either way, it has to be a forgone conclusion that this bike will exceed the acceleration benchmarks set by BMW S1000RR, and will likely exceed them in a big way.

American talk show host and famous motor enthusiast Jay Leno will likely take part in the introduction, and has promised to preview the H2 in his YouTube channel "Jay Leno's Garage". Jay claims the new H2 will accelerate as fast as McLaren P1, LaFerrari or Porsche 918. If the road going H2 power output is similar to that of the H2 R, this claim may very well be accurate.

We will have to wait and see. The good news is that we don't have to wait long. And tomorrow may be a historic date in motorcycle history.

No way it has 200hp. That would defeat the purpose of the design. Bikes dont need torque, otherwise you can have much smaller n.a. engine with same hp.

I think the 200 figure is just to calm people down and make sure we dont have unrealistic expectations.

I made some research.
Street version is almost the same bike like H2R. In reality it hasnt 200 hp, it have much more than 200 hp, but to avoid some regulations

There have been a lot of claimed horsepower numbers bantered about, and the initial 200PS horsepower (metric measurement that equals about 197hp) claim that was made by Kawasaki back at the Intermot show was said to be “premature” and has never been quoted since by the factory. But not in a negative sense; we’ve been told by sources close to the project that the actual horsepower will be “a good step above 200hp”, and the reason for that number was to avoid unwanted scrutiny

no one the kawasaki homepage the specs are out!

Unfortunately, Jay was not given the horsepower figure. So we will have to speculate on that some more.

and im shure it would be faster than the H2R

and i would say you get hypercar performce of an 918 for only 20000$
if you are a really really good driver!!!

Fly lap MotoGP bikes on Laguna Seca can do in about 1:21.
Im dont know what with stand still start.
But unlike with the cars, MotoGP motorcycles are not that far away from street bikes, and they are much cheaper too.

But still motorcycles are usually slower than cars, its ofcourse based on particular track - bikes are faster in straight line but slower in corners.

So it pretty close with adventage of 4 wheelers.
But frim ptrice perspective You really can have hypercar performance for about 30.000$ brand new. Where the performance is on the level of GT-R.

MotoGP bikes have over 240hp. They are trying different ways to limit the HP such as forcing teams to use smaller fuel tanks. The teams have to tone down the power to be able to finish the race.

Also, more power is tougher on the tires. One set has to last the entire race unlike F1.

As for laptimes, using Laguna Seca as an example, the bikes are in the low 1:33.xx range (1:33.07 for the Ducati 1199 R on stock tires) BUT the bikes have to run a slightly different configuration than the cars. There is an extra chicane that the bikes have to go through to slow them down (to keep the noise down).

The more powerful & lighter 1199 Superleggera (seen in the drag video I posted) would get under 1:33. For 2015, the Ducati is 1299cc and the 1199R is lighter and more powerful with improved electronics.

Would they beat a 918 around the track? Maybe, maybe not but they are already beating every other stock street car including the Viper T/A around Laguna Seca.

@FastestLaps: Oh, that's still too much horsepower for 2 wheels. Heck, racing motorcycles have 200 horsepower. I don't like motorcycles much, but if I had to choose a motorcycle, I'd rather have a Harley Davidson FXR or a Fat Boy.

As much as I'd like to see times for bikes, it is almost impossible to get a 100% stock time.

The reason is because in most cases, stock OEM tires aren't used because.....they are usually crap. Most magazines will use the same DOT tires for all of the bikes in the same test. That way, there are no complaints about "....if it didn't have those special tires...." like there are with cars (see Mustang PP vs Camaro 1LE, for ex.)

Some Ducatis come standard with better tires than the big 4 Japan bikes and there are sometimes problems finding exact matches for all bikes (minor differences make a big difference with bikes).

Bikes would be interesting for discussion but not direct comparison

I absolutely love motorcycles and always have been.

As for laptimes - it's definitely possible and it's on the scope of things that I've been thinking about.

But first I have to fix and improve other stuff.

Im glad that we are allowed to discuss motorcycles here.
My wish is that users will be able to add motorcycles and laptimes of them.
I know that its very hard to find 100% stock laptimes of motorcycles, but it doesnt matter- we need just several laptimes to compare bikes to cars in general.

As to H2 - its a milestone motorcycle not only for Kawasaki, its indeed P1/LF/918 of motorcycle world.

It's about 300 horsepower not mph.

Superbikes were too fast even several years ago but now this is a madness.

Definitely charged. Autocar is a car magazine, they won't jeopardize cars in such a race.

Were both cars fully charged?

I hadn't thought of that :)

If they have the opportunity to drive/test a P1 and a 918, I would assume that they did it right. Looking at the shadows, it looks like they were there all day so I'd guess that for the big race, everything was 100%.

That is an epic dragrace video you posted. 918 did very well but the bike - I would have never guessed it would pop in front like that.

Were both cars fully charged?

Current 1000/1200 cc sport-bikes accelerate quicker than the P1/LaFerrari/918 through the 1/4 mile. The cars do eventually catch up and pass the bikes due to aerodynamics and speed governing.

The H2 (street) and H2R (track only on slicks) will be traction limited but trap speeds should be amazing.

These numbers (calculations) are BATSHIT crazy! Ahahaha! I don't know how ...

Sadly, this very informative post will disappear along with everything else added within the ...

they don't want you to know the truth, the cause of sudden outtage of ...

Migrating to new server! Do not add any data until I remove this message ...

It's a fake FPC. It still sounds like a muscle car on crack. ...

That I believe is only a rumour. I can could be ...

What "credit?". Both those cars had NOTHING to do with the ...