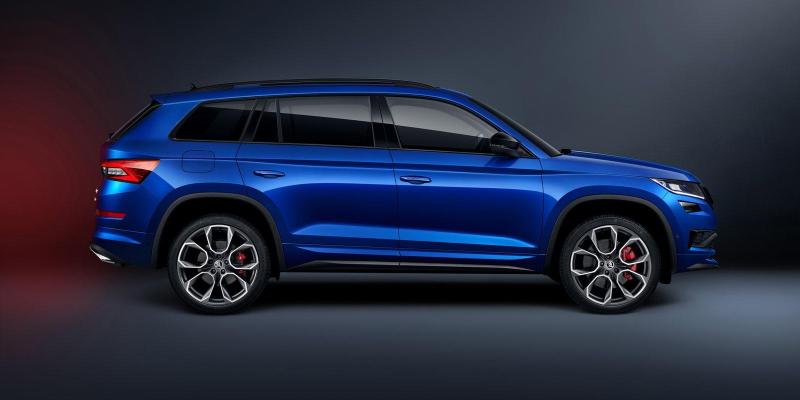 2018 Paris Motor show is about to start and car-maker marketing departments are working overtime releasing news designed to grab headlines.

VW group are now claiming another Nürburgring lap record, but not for a sports coupe or performance sedan. This time it's not even a front wheel drive hot hatch.

VW subsidiary Škoda are claiming they have worlds fastest 7 seat crossover - Škoda Kodiaq vRS. In hands of no other than Sabine Schmitz - the German racing driver turned TV personality, Kodiaq managed a laptime of 9:29.84.

According to the list of Nürburgring lap times, this is the slowest all wheel drive time ever, slower even than ancient Opel Calibra. But that's OK, marketing people can sell water as wine and icecream to the Eskimo, and, apparently there is no other faster SUV which comes with option of having 7 seats, which makes this laptime fastest in a narrowly defined niche.

What I like and respect about this record the most is not the presence of 2 extra seats, but the fact that Škoda Kodiaq vRS has diesel engine - 236 horsepower twin turbo diesel, the latest in VW technology and a gem of a power plant that, unfortunately, will not make it to United States after US government decided to fine VW over cheating to pass emissions tests, which are, arguably, too strict and biased against diesel engines.

BTW, question to @fastestlaps. I've been away for about 5 years and don't seem to be able to add lap times any more? I've quite a few lap times to put forward...including this months Ferrari 812 Superfast time by EVO mag

This is a hilarious lap time when you consider Sabine got a ford transit around in around 10 mins 15 about 12/13 years ago!

Im also more curious as to why they would even announce this? Skoda isnt really known for performance, Sure they have some good 200bhp+ cars(Even if they all look like VW and Volvos) But Skoda isnt on anyones list looking for performance in any way, I think they just might be trying to start something..

Itll only be a few weeks before one of the big performance brand blows those numbers out the water just for the sole reason of blowing it out the water, Big time.

I personally dont think this was a smart move by Skoda, Last thing we need is F1 track credentials on 7 seater SUVs that are designed to haul familys around cross country, Fkn stupid if you ask me.

Speaking of Nurburgring lap records... I came across this the other day:
https://www.corvetteblogger.com/2018/09/10/pic-retirement-gift-for-jim-mero-may-have-revealed-the-c7-corvettes-nurburgring-times/

I’m sure even a Tesla mode X could beat that even if the car would go into limp mode near the end.

Only becouse Q7 or GLS wasn't tested on this track.

Good lookin suv, But means nothing, No ones cars about laptimes in a 7 seater cross over suv whateva, If more major companys dod take it seriously, This car would get dusted by say Audi or Bmw. Its like saying you have the fastest ring time for a car thats under 40k..Sure its nice n what not, but useless.

I don't believe it either.

They may move to electric front hubs for a linked four ...