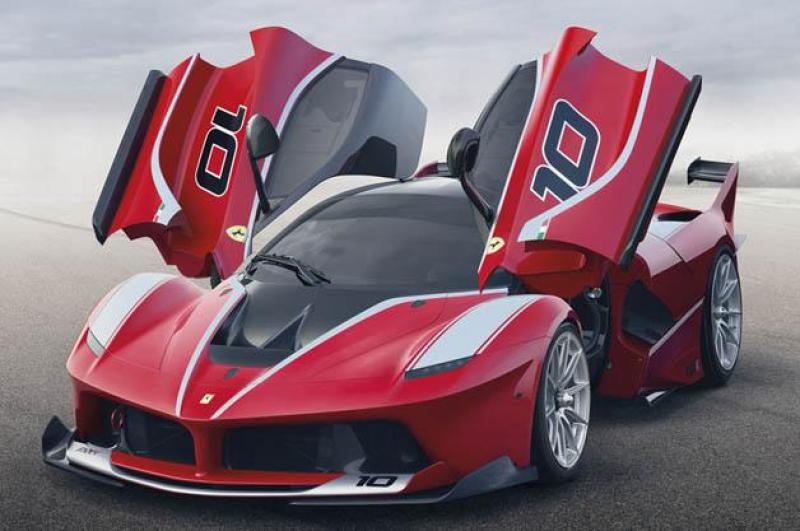 Ferrari has revealed a track-tailored special edition of already special LaFerrari. The Ferrari LaFerrari FXX K is due for official launch later this week, at the Abu Dhabi Yas Marina Grand Prix circuit - the same venue where Formula 1 concluded the 2014 season.

Unlike the Formula 1 where Ferrari struggled to gain traction both, literally, on track and in terms of championship points, this track day special is almost guaranteed to be a success, with all FXX K cars soon to be sold out to select customers.

It was mildly surprising for me to see LaFerrari receive the "XX treatment" before the F12, which, without complicated KERS systems, would seem like a more straight-forward candidate for a conversion, and, potentially, more profitable as well.

It is, however, important to note that "Ferrari XX program" originated with Ferrari FXX - an adaptation of the LaFerraris predecessor Ferrari Enzo, and is likely treated as nothing more or nothing less than engineering experiment, as well as means of generating flashy headlines about new track records for cars which mildly resemble Ferrari street cars.

There's only ONE absolute for inclusion. Hybridity drive assistance. Anyway here are all three majestic machines>

LOL! DEFINITELY want a Pagani Huyara R page now! The boss made one 7 years ago! Ahaha.

I don't know... I still prefer a Zonda R, or better... Zonda Revolution. The Zonda has more DF, crazier styling, and is so much lighter. Power to weight is still in the Zonda's favor

I know this will never happen, but it is interesting to dream up on a series of competitions for hybrid hypercar, where we could see the rivalry between the FXX K, 918RSR and P1 GTR. I think it would be much more interesting than monocups.

I find this conversation funny.

Well, if Ferrari makes another one, they can travel back before DeLorean built theirs. Or the exact other way around. XD

But DeLorean would probably sue Ferrari, as DMC had a time machine first!

Now that would be a literally killer machine.

Lolololo.... and 2 years later they will have Ferrari TheFerrariDasIstFerrari FXX-CK THE SYS-TM which will finish a lap at Fiorano exactly 1 second before it started.

Based on how Ferrari claims their ultra-rare cars perform at Fiorano, the Ferrari FXXXXXXXXZ that comes out in 73 years will have a lap-time of exactly 1.0 seconds.

I'd love to see other cars get tested at Fiorano, I wonder wat Ferrari would say.

Just a second over the 599XX - I would consider that a disappointment. But, yes, these numbers do look suspicious, to say the least.

I think we are getting heavily averaged and rounded up numbers. I am sure the actual times were better for all of these cars, they just came out with these round numbers exactly second apart, to make these results look as they please from the marketing standpoint.

These cars can do faster times I am sure. But they can get away with publishing abbriviated times, simply because it's Ferrari's own testtrack, and who will ever be there to challenge them?

wow. awesome car but ridonkulous Ferrari laptiming again. So The Ferrari FXX does 1:16. The 599XX Evolution does 1:15, then the Laferrari FXXK does... yes you guessed it, 1:14. Either way you put it whether the fxxk can do much faster or the 599XX Evo couldn't have done that time, it's just so obvious how they are just making numbers up. "1 second, no more, faster..."

What about DueX K? :P

Well Bugatti have had the German TUV present and on top ...

Wait, we all know this is a coachbuilt Rimac Nevera right? ...

He isn't blocked, he decided to leave. He returns from time ...

Idk about that 7:04 time being the maximum potential since Chevy ...