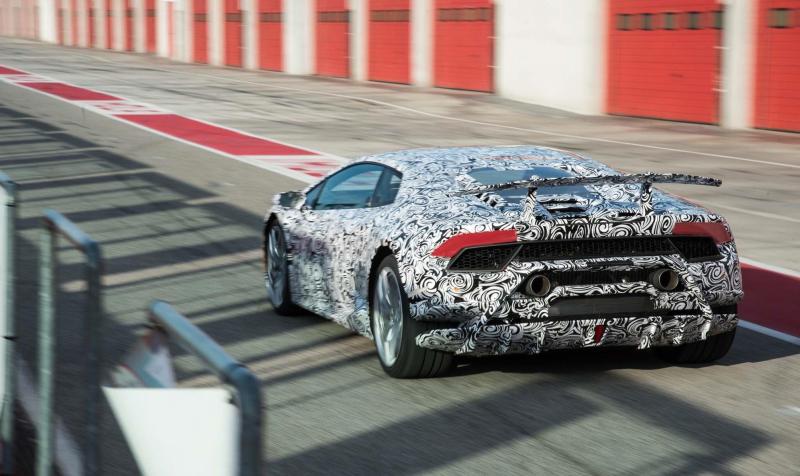 Power is expected to rise to nearly 650 PS and there will also be "Superlaggera" style weight reduction.

The most impressive feature will be efficient and fast active aerodynamics system which will be the most advanced ever fitted to any car.

We will have to wait until Geneva Motor Show in March before Lamborghini go public with the alleged lap record and exact power and weight data.

That essentially confirms that Lamborghini have absolute Nurb record and Porsche 918 is dethroned.

is it true that lamborghini huracan performante will be officially revealed today?

No sroser. The 6:57 lap, pre production car ran out of batteries just at the beginning of the back straight, yet the production version tested by sport auto had nearly full power at the end of the lap.

And your example about the production car being faster than the first times run at Laguna... it's not like they were ridiculous speeds. The Porsche was still slower than the P1 at the end of every straight despite accelerating harder and early after every corner. The speeds reflect exactly what the car should have... 887hp, less than the P1. If it had higher top speeds then your argument would have some reason.
On the other hand... the first run had a max speed of 140mph and that can NOT be right. Obviously something wrong with the car. Vipers and corvettes are hitting those speeds

You on the other hand are trying to say the first run is the "norm" run. You my friend are so sad

They had a total of less than 10 runs with 2 completely stock Weissach 918s.

Come now, they weren't completely stock. Don't remember any production 918s having a fixed roof. Also pay careful attention to the centre roof console. Flip-down sun-visors also gone. Small matter of explaining why the battery on the production 918 only lasted 2 minutes at Sebring and Laguna but the 'ring car (pre-prod) lasted 6 minutes and why the production 918 was 4-5mph faster on every straight at Laguna. Seems to me that HL Mode was re-tuned for shorter laps.

And before you deny any of this be aware that I can completely prove every single thing I've said.

That aside, I don't doubt that a 918 could do a 6:5X lap of the 'ring even in RH Mode with the right driving, it's just a little stupid when some jumped up Porsche fan-boys cry foul every time another car beats a Porsche.

It's funny but that's exactly what old people said about 30 years ago, simply because beyond 75mph was about the only time they were forced to take the engine over 3000rpm.

What I've said in those 2 messages posted before...it was an ironic why of speaking. Nothing precisely. Nothing serious. Just irony. Yes the M4 has a lined 6 cylinders engine and the 488 has proper V8 engine...but it was all an irony. My real reason was that you can't judge a car (Lamborghini Aventador SV) ....by being "fake or worse" because the results of other laptime from other racetracks didn't match with the ones of Nurburgring. There are plenty of reasons to explain that. What is important: is that the Aventador SV laptime on the Nurburgring is real...nothing fake and I will applaud ,Lamborghini for that. As a conclussion : I hate turboengines. That's my final point of view.

lol Like i said, You talk alot of Bs.

Johnny is so clueless with engine technology.

BMW don't make no V6es. 488 engine is brand new engine with nothing common with 458 engine.

So no, manufacturers are not "lazy" and those are all bespoke new engines.

All right. Take the turbo down but instead of it, add an engine with 2 more cylinders. E.g: instead of V6 with turbo..add a V8..and then let's see the results. This days many car manufacturers doesn't bother to make an proper engine. They just take an old engine..add a turbo at it...and boom...we have more power. Pagani has a Mercedes V12 engine with turbos...M4 has V6 with turbo..Ferrari 488 has the V8 of the 458 with turbos....and so on....It's a bit lazy. There are car manufacturers, who try it's best, to make a perfect and powerful engine...and others take an old engine..add turbos at it..and boom...they have a new car...and people pays a lot of money for that. It's like cheating.

BS. Remove turbo from any turbo car and measure 0-100 / 0-150 or any other acceleration time, and see what happens.

Turbo is useless only if youŗe lugging the engine at low rpm and usually only for a split second, if you're in optimal rev range.

And this latency/lag has been reduced in modern engines with multiple / twin scroll turbochargers and electric turbines.

No... I dont. But I admit that I made a few mistakes of expression. When i said "lightwight body" i meaned a lighter body than one of a normal Aventador. My mistake. But for the rest....there's no bs. How does the turbo works.....the turbo needs the exhaust gas after compression to produce air for intake. At 150 km/h the turbo (twin turbo) works at 35% more or less....which means 8.75 % air for each of the four cylinders....which is not enough for a strong compression combustion. But the V12 engine has 4 more cylinders than V8 engine which means that V12 can give more power and a faster acceleration on short distances than a twin turbo V8. Take a look at the Nurburgring....it hat only one portion of the circuit for high speed.
The rest are more than 40/45 curves and some of the are quite dangerous. What can a turbo engine and a RWD car do on a racetrack like this? Stop with this nonsense ....the lap time of the Lamborghini Aventador LP750 SV on the Nurburgring is 100% real. Why did the owner of the VW stopped the Lamborghini for another lap time? Why McLaren doesn't reveals the lap time of the P1? Why Ferrari doesn't try the LaFerrari on the Nurburgring Why? This is bs. Do you think that, Lamborghini took the laptime test on the night...when nobody saw it? No...the Laptime is official...and McLaren, Ferrari and others knows that. So stop telling me nonsense.

Mate, Johnny, You certainly talk A Lot of bs.

First of all...a naturally aspirated engine... if we talk about LP750 SV will be always faster than turbocharged engine from 0 - 60 mph or 0 - 100 km/h...Why? Because because a turbo works better, only at higher speed. At speeds like 100, 150 km/h, the turbo is useless. So a bigger naturally aspirated engine...is better on lower speed than a turbo one. Second ...the Nurburgring is not at all a racetrack for higher speeds....it's the most dangerous and hardest racetrack of the world. Just take a look at the Nurburgring and at the other racetracks...and you will see the differences. And for this reason the Aventador has a huge advantage: faster acceleration from 0 to100km/h, 4WD, increased downforce, magnetic shocks, lightweight body...and a big engine. Lamborghini doesn't make cars anymore for higher speeds...but they make cars for sharp corners. So i'm pretty sure that a superlight Huracan can beat a 918. Lamborghini has it's own technology.

Where exactly does Porsche "play foul"? And about the ring time:

They had a total of less than 10 runs with 2 completely stock Weissach 918s. They had 3 drivers, Marc Lieb, Timo Kluck, Walter Röhrl. All drivers never before had the combination of the 918 and the Nordschleife before.

Car was bare stock and just had two days with 3 hours per day. Marc Lieb didn't even go full out (he said ^^).

They may move to electric front hubs for a linked four wheel drive system. ...