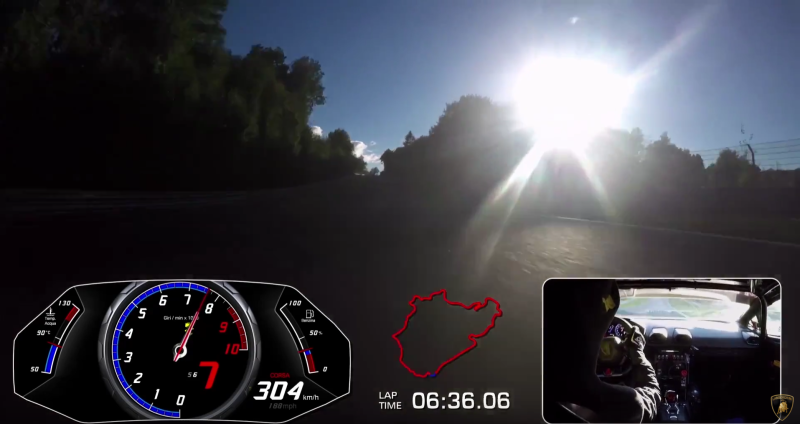 The Lamborghini Huracán Performante has lapped the Nordschleife in an amazing 6 minutes and 52 seconds.

This is not surprising to many, as Lamborghini have hinted at a new Nürburgring record in late January.

Lamborghini Huracán Performante will be revealed at the upcoming Geneva auto show in March.

So what's with posting that video claiming it was faked.

Sroser, You are the VeRy last person on here to call anybody a dummy, The very last person

And yes, You need to do better since you didn't prove anything.

And I never once said they cheated.

"There is no controversy with these laptimes". "You will let Lamborghini go about its business". These are not the corporate droids you're looking for. Move along. LMAO

lol at Racelogic. There is no "controversy brewing" about this lap time. Only ppl saying its fake are usual morons on YT or socmedia looking to do controversial click-bait videos and articles.

Or BR2+ and a whole host of dummies on fchat.

lol at Racelogic. There is no "controversy brewing" about this lap time. Only ppl saying its fake are usual morons on YT or socmedia looking to do controversial click-bait videos and articles.

No car manufacturer would release sped up onboard video as proof of laptime. It is preposterous to think so. And Racelogic knew this perfectly well. They did that post only for publicity, not because of genuine interest or suspicion.

Real or Fake? There is some controversy brewing over the recent video posted by Lamborghini showing a 2017 Huracan Performante clocking a 6m52s lap of the ring. This piqued our interest, so here is our (somewhat geeky) analysis:

The distance between the gantry and bridge is 1727m which was calculated in Circuit Tools using some customer VBOX data. This was then confirmed using the measuring tool in Google Earth. We then integrated the speed from the on-screen telemetry data on the Lambo every second using the built-in video time-stamps to obtain distance travelled. This data was obtained by stepping through the video in a video editor and entering the displayed speed every second into Excel. When integrated, the telemetry data made it 1728m from gantry to bridge, so the reported speeds and times between these two points on the circuits matched the real world distance precisely. This means that the speeds on the videos seem entirely realistic.

We then analysed the engine sound (using an FFT analysis) from the Huracan at top speed on the same straight, which showed a maximum of just under 7750 rpm on the rev counter. This analysis showed a strong peak at 640Hz which equates to 7680rpm for a V10. Therefore our opinion, based on both pieces of evidence, is that the video has not been speeded up. Next time, it would be a lot easier if they used a VBOX Video.

Somebody hate a Porsche here...

Still not gonna let it go are you? Dude get over it already, 918 faster then P1, Deal with it.

For 1 lap... on some tracks... but not on track days... so say people who own all three. Deal with it. Do I listen to two GT Open drivers who own all three and have extensive track day experience, or some clown on the internet?

Another little untruth those two drivers dispelled was the horrible myth about Trofeo R vs Cup 2 vs Corsas that you Porsche fan boys BS'd up.

And no you didn't dispelled anything, Did you actually watch and listen? See?

Yes, I watched the video, did you read my response. Do you believe Lamborghini reproduced the cloud cover perfectly in the two videos he alleges they edited together and also perfectly aligned the car's track position and the driver's arms? If they edited together two hot laps, would the speed at the same point be 30+kph different anyway? JFC, some people are dumb.

This is typical Porsche fan boy BS tactics. Same crap we had 9 years ago after the GTR laps. Last time it was comparing the speed on Dottinger to a ZR1 running against the wind, this time it's comparing a 918 with a flat battery accelerating against a Performante and comparing GPS speed to indicated speed.

Still not gonna let it go are you? Dude get over it already, 918 faster then P1, Deal with it.

And no you didn't dispelled anything, Did you actually watch and listen? See?

How fast this car really is, we will see very soon. But hey, clever AWD and ridiculously aggressive tires and this car wasn't ever going to be slow.

The sad thing is we won't though. Because the 918 laps post-2014 were not done with the same HL Mode configuration as the 'ring car.

Then you have the 4-5mph it gained on every straight on Laguna between 2014 and 2015. The 6+ minutes the battery lasted on the 'ring vs the 3 minutes it lasted on Sebring. The P1 vs 918 comparo Sport Auto did against the pre-production 918, where no times were released just before the 918 gained a huge amount of straight line speed. It's Porsche that conned people not Lamborghini.

Seen it, and I've just dispelled all the points made, if you actually read and understood my last post.

How fast this car really is, we will see very soon. But hey, clever AWD and ridiculously aggressive tires and this car wasn't ever going to be slow.

Has everything to do with it but I answered your other question to. 918 is ahead at 2 minutes, level at 3:50 and 5s behind at the end. Draw your own conclusions.

It also pertains to why the 918 may well be faster in magazine tests.

So how do you explain the gear and revs still going up as the speed is going down? It's GPS, when you drive into a tunnel, it will go off completely.

You're right, the Blair Witch is hiding in the trees, I didn't see that the first time.

Look at the clouds, exactly the same shape and place before and after the speedo jump. Look at the driver's hands and the car's position on track. There is no ****ing way you could edit together two videos that precisely. Give it up already.

...Why the hell are you STILL bringing up 918 battery time? It literally has nothing to do with this.

And effects of trees my arse, Theres trees all over the Ring, Also, Look AT the trees at that time, I hate to say it but there is something very fishy about this laptime, Something just seems off, Im certainly not goon say they cheated, But i watched the whole video, And something just doesnt seem right...

This track is so important now but also so different than the others that I don't think it's a valid test for compare cars, I know it's interesting for sure but it's not a bible of Motorsport...918 probably can beat Lamborghini in every track on earth but not on this one (apparently)...
so, it's slower?

It can beat it on every track lasting around 2 minutes or less for 1 lap but on a track day, the 918's battery will tire long before the Performante slows. Hot Lap Mode was a great deceiver.

GPS reception lost. Look at the revs and gear. The revs continue to rise even as the speed goes down and the gear is the same. No hoax, just the affect of trees.

Oh shut up sroser, you are a repeating broken record. go look at the post production sport auto lap of the Nurburgring. Battery is still nearly full at the end of the lap.

That's because they used Race Hybrid Mode until they got to Dottinger in the Sport Auto lap. Watch him switch at 9:20. The first two videos below are the pre-production 918, the last is the production 918, note the difference from video 2 to video 3 in battery longevity.

You can see the damn battery is flat in this video.

You are in denial.

Oh shut up sroser, you are a repeating broken record. go look at the post production sport auto lap of the Nurburgring. Battery is still nearly full at the end of the lap.