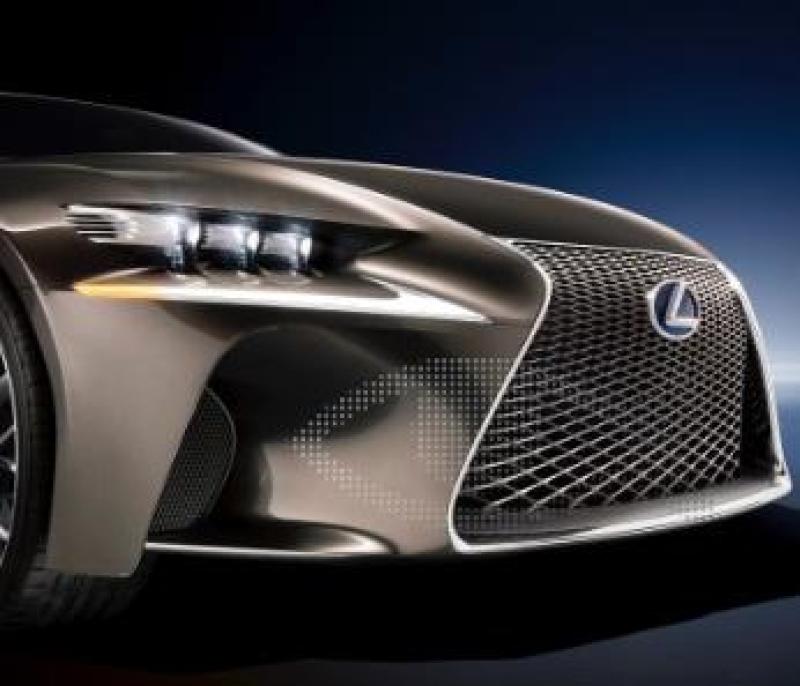 While Lexus isn't exactly BMW who present a "concept" before launching exact same car for production, many believe LF-CC is a close approximation of what the next generation IS will look like, both inside and out.

LF-CC also hints at a new addition to future IS model range - a two door IS coupe.

It is then reasonable to speculate that this coupe body style will be incorporated into next generation IS-F range, which would make it good competition to cars like BMW M3 Coupe (or M4), Audi RS5 and Mercedes C AMG Coupe.

Either way, I am very happy with the way this concept looks, especially headlights. It is difficult to image a headlight design that looks great and hasn't been done before. I think Lexus have done it here.

If these three piece LED projector lights survive to the production version and they don't mess up general proportions of the car, I think the new IS will be the best looking car in it's segment.

I hope it will, because IS F needs a successor. But what I really wish - LF-LC concept reached the production! Maybe that is "less advanced" than the LFA, but the LF-LC would be a perfect successor to the LFA. And I swear, that is one of the most Beautiful vehicle from Japan ever, and I don't bother if it goes on batteries! So, Toyota, make us a present, please, let this masterpiece hit the public roads!

Now, will the LF-CC reach production? I never heared some new news about it.

@ derke, true
both the Boss Mustang & Camaro 1LE,... also I've heard talk about an ATS-V :)
That's what happens when your on top, everyone is always gunning for you. The M3 is a great benchmark for performance and everyday drivability.

Yeah, Mustang GT is the pioneer of M3 killers.

The M3 already have two killers for much less $ and better performance: Mustang BOSS Laguna and Camaro 1LE. See you in the rearview mirror M3. :)

The Interior of the new XJ has no equal!

F-type out next May I think then 18 months till the coupe version. I can't wait it looks gorgeous!

Jaguars fit in over here, but there a bit plain, that Dark Murky look they have on the roads here, fits, but is also no formality, however though, i think the new F-Type would change that.

@MondayBlues I agree with you, despite all the problems I had with my Jaguars, I would be more interested in the XFR-S. Jaguars have more character than Lexus in my opinion. I really like the current M3 however, and I think it will be difficult to beat from a fun to drive stand point. I considered the M3 a lot before deciding it was a bit more than I wanted to spend on a commuting car. I doubt that I will like the new M3 nearly as much.

It's nice to know people still remember me!

Hope Lexus do the works but I'm for the XFR-S...

eric is a good mod

Eryk you really need to learn the meaning of being "off topic" and "spam". Look it up google is your friend.
Back on topic, Lexus would need to make a big step forward to compete with the likes of M3, RS5, C63....
Desing in very aggressive but aditional electric motor+battery means it will be rather heavy

And again I have to delete this entire pointless spam?
Please back on topic.

I dint see how u can justify his actions, if u want to ban the members fir spamming, please do, but myself, E, Apathy, Monkey, Jeff, did not spam at all, we disagreed and questioned his methods, especially since all of us have been hereafter long time, your abandoning the members that have supported the continuation if this site, that's not right fir a moderator to abuse there power like that anyway you look at it.

@Fastestlaps I am a big fan of your website, but I feel that Apathy, Monkeypop, E, Jeff B, and any others recently banned by Eryk03 should be re-instated to full membership. Their comments, added cars, and added lap times greatly enrich this wonderful website. Eryk03 has done some very good work fixing some of the car pages, and I do appreciate the work, but banning all these fine members is unwarranted. I trust that you will do the right thing, thanks in advance.

I agree with Simianpop, the members who were banned had not posted anything disrespectful. There was a discussion involving drivetrain preferences between AWD and RWD, and a few comments asking as to why certain lap times were no longer on the site. Suddenly Eryk03 started deleting everyone's comments, so a few asked Eryk03 why the comments had been deleted, and in reply Eryk03 banned the members. Very strange response in my opinion. I wasn't directly involved, but I still think it strange behavior on Eryk03's part.

Have you checked your email fastestlaps?

Many of the members that got banned have been trying to contact you. Myself, Apathy, E, Jeff B and a few others got banned. We just posted comments about cars that got removed as they did not agree with Eryks point of view. When we questioned the removal of the comments.. we got banned.

That is not appropriate moderation. This is a car site, people should be able to discuss cars without a moderator removing comments just because he does not like the cars being discussed.

None of the members acted childish or called him names. They simply asked why he was deleting our comments.. and bam.. we got banned.

There have been some very rude comments posted but certainly no by members.

I NEVER called him any names nor did any of the other members banned. Apparently you have not been paying attention to what is going on here.

We were having a mature discussion about cars. Eryk started deleting comments posted by members just because they had a different opinion than he did.

Those discredit every argumented criticism there might be for Eryk as moderator.

It's because of those comments, that it seems to me that Eryk really hasn't done anything wrong, and members he banned where immature, rude and didn't comply with site rules.

M5 destroyed it on all the straight line

3:05 sounds WAY better. Seriously, this car is supposed to be much faster. ...

It has two seats. But probably even the roof is more ...

Something is wrong with this lap time... It should be around ...

Hello, Fastest Laps and Hoppelmoppel123. I see Autocar has definitely tested the 2021 Volkswagen ...