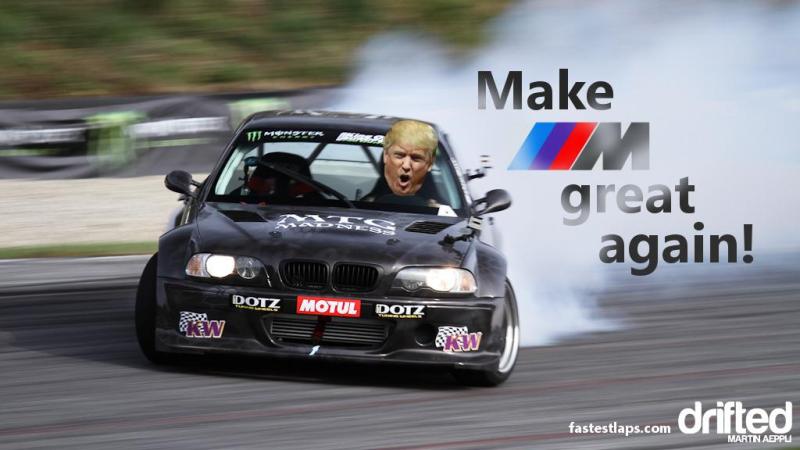 My wish has been granted - BMW M division are finally ditching the rear wheel drive policy and addressing competition from Audi with a 4 wheel drive M5.

Audi sedans have been kicking BMW's backside in every performance test under the sun - all because of BMW M3, M4 and M5 inability to "hook up" and convert torque to motion in standing starts.

Modern turbo engines have too much power, too violent of torque curve for manageable delivery at very low speed. Even advanced, fast-reacting traction control is not a solution.

Solution is all wheel drive and BMW have developed and deployed its xDrive system for decades. There is really no excuse not to make it available for a 2 ton twin turbo luxury sedan.

G30 BMW M5 xDrive specs are yet to be released, but I think it's safe to assume they won't disappoint. As far as driving sensation and "ultimate driving experience" - I couldn't care less. I can't see myself ever buying this car, all I care about are performance numbers. We love numbers bigly here at FastestLaps.com.

To be fast in a straight line you only need a powerful engine. Chassis in not relevant

I honestly cant take you serious anymore since you said that.......

And apparently you dont know what the word pleasure means, Or i should say driving pleasure if your just gonna say turning matters. Simple fact, Driving pleasure is how great it makes one feel, Not how great it turns a corner, And at the same time like i said before, Subjective as the best color.

In a straight line, there's always a ton of speed limits, so drag racing doesn't really happen much in real life. Turning at high g-forces... that happens every day for me. Unless you live in a grid network, I much prefer handling pleasure over straight line acceleration. If it's just acceleration you want, just get a tesla.

That's the point. I totally agree!

To be fast in a straight line you only need a powerful engine. Chassis in not relevant.
To be fast in turns, you need a Car.

How isn't it logical? Plus it doesn't have to be if one is enjoying ones self. And where did you even get that comment from?

Driving pleasure isn't just in turning the car, It's a multitude of things. To some people having great handling doesn't do shite for them and going 200mph is more fun, And the same could be said about simple braking, acceleration has a ton to do with driving pleasure, A ton. But to limit it just to handling is absolutely retarded.

In a straight line, there's always a ton of speed limits, so drag racing doesn't really happen much in real life. Turning at high g-forces... that happens every day for me. Unless you live in a grid network, I much prefer handling pleasure over straight line acceleration. If it's just acceleration you want, just get a tesla.

Where in the world did you ever get that driving pleasure is only measured in the turns and the effectiveness in handling? That is so far from t he truth. Driving pleasure can be just as fun if not funner when not turning the car, Why do you think so many people do so much drag Racing around the world? He'll it's more popular then track days by a long shot

According to this point of view, Big Mac is better than amatriciana only because the largest part of people in the world eat BigMac...
Not so logical.

Where in the world did you ever get that driving pleasure is only measured in the turns and the effectiveness in handling? That is so far from t he truth. Driving pleasure can be just as fun if not funner when not turning the car, Why do you think so many people do so much drag Racing around the world? He'll it's more popular then track days by a long shot

And the Giulia the benchmark? Does it set some benchmarks? I'm sure it does, But overall i dunno, I personally can't say that since I haven't the pleasure, But that's as subjective as interior color no matter who says it, It's not the fastest saloon, Its the fastest on a single track.

And Bmws have never been the ultimate driving machine, Onlyrics there M cars were, And even then they had enormous competition, But those days are long gone, And they keep slipping little by little.

I'm no fan of BMW adding Awd to there M cars simply because there jealous of Mercedes and Audio beating there launch n acceleration numbers, Thas just bs, Bmw is redefining there slogan the ultimate driving machine literally as that, Since they will all be driving themselves pretty soon.

It sounds strange to me. Audi kicks BMW? When? Where? How?
Talking about driving pleasure, I would like to see any Audi capable to enjoy its driver at the same way a BMW does.
I definitely don't think 4-wheel driving can be considered a serious help in driving pleasure.
0-100 km/h acceleration is just indicative, it has nothing to do with driving pleasure. The same is for 0-200 km/h: it only gives you a thrill.
The real driving pleasure is related to the effectiveness of the car in the turns, the handling, reactivity... the feeling the car gives you.
Audi is light years behind BMW from this point of view.
Alfa Romeo with its brand new Giulia Quadrifoglio has redefined the benchmark in the super-sedans class.
It is the fastest. That's a fact.
No awd, just a very well designed rwd: fantastic chassis, wonderful engine, lightweight, fast gearbox... this is the recipe for a great driving pleasure.
Awd may help you in acceleration or on wet tarmac, but if we are talking about real driving pleasure, please don't confuse it with acceleration!

Totally agree with the comment below. But again that goes the same with Merc. And most female drivers don't really know what they are driving specifically anyways.

But the opposite could be said as well, that most M3/4 drivers are guys, because women would mostly say... why am I paying 2-3x the price of a normal BMW? Both are BMWs.

Regards to the "ultimate driving machine" slogan. Do still use it, and I applaud them for all these years sticking to that sports salon mindset: front engine, drive to the back, 50/50 weight distribution... even on its base 116i model. And a 6 speed manual is a "no cost option"

Unfortunately much of the lower line up is going to go the Audi way, FWD. this makes it hard for me to see the difference between a BMW and a Honda.

Sadly, BMW customers have changed and BMW is more concerned with making them happy.

The "Ultimate Driving Machine" has become the "Ultimate Status Machine". Ask a BMW owner what they drive and more than half will say "I drive a BMW..." They won't mention the model, the engine displacement, etc. As long as it's "...a BMW...", they are happy.

Gosh look what "ultimate driving machine" has come down to.

Do they still even use that slogan in their advertising? I certainly still can't let it go and bring it up whenever I write about BMW :D

I think it sounds even more ambitious than Audi's infamous "Vorsprung durch Technik".

but bmw launch controls have always been inferior to the competition. So it'll still lose to Audi.

Gosh look what "ultimate driving machine" has come down to.

M cars will never be analog sportscars ever again. They will be heavy, turbocharged, fake sounding synthetic behemoths, before they morph into hybrids and all-electric vehicles.

If they are synthetic behemoths, they might as well produce some interesting (ever improving) numbers that are fun to compare and brag about.

As far as modern "analog-like" cars such as 911 R - those are for automotive perverts, journalists and speculators as they are for pure driving enthusiasts. Did you know there was a guy who put 911 R - a regular Porsche in production todady, on ebay for a price of 1.2 million bucks???

No thanks, I will take the sythetic M5 with fake V10 sound instead, if that's what it cames down to.

The point is - if you want pure driving pleasure, buy classic or modern-classic car (like the old beemers E46 and E60 and older). Let the modern stuff push the envelope in acceleration and lap times.

As far as driving sensation and "ultimate driving experience" - I couldn't care less.

I think you may be in the minority here. Nowadays, numbers tell only half the story. But you could also argue...where would we be without them?