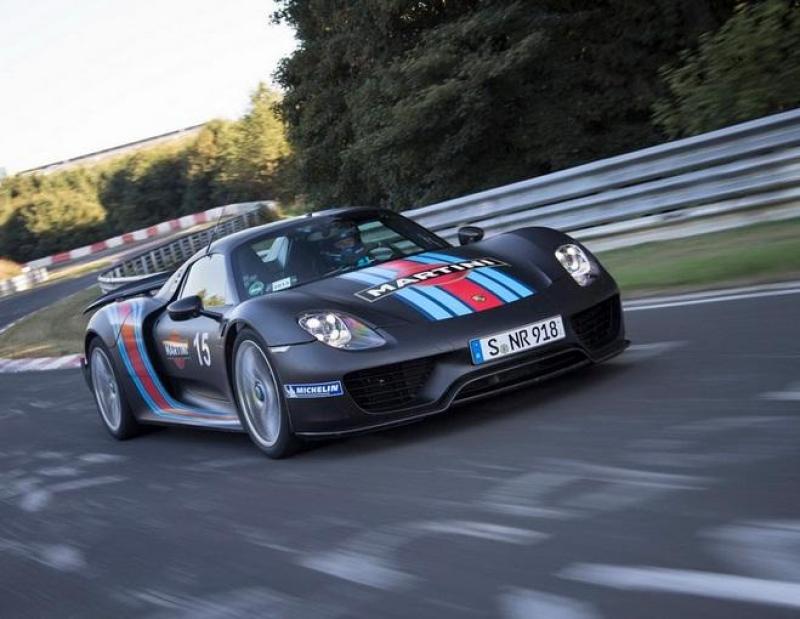 The timed run by Randy Pobst is especially notable, because it set a new production car lap record at the Big Willow, surpassing the Viper ACR by ridiculous 2.5 seconds!

The 2.4 second 0 - 60 time as well as best ever figure-8 and braking marks were also impressive. Until they got a little tainted when Motortrend pasted in a side by side interior footage of 918 and P1 accelerating, which confirmed that the 918 edge ends quickly after gaining full traction, and P1 will be the decisive winner at the dragstrip.

Until McLaren proves otherwise, there is no reason to be absolutely sure that P1 will carry this victory all the way to the racetrack.

While McLaren have been keen on advertising the track oriented suspension and crazy amounts of downforce the P1 body can generate, there are no hard facts to confirm that it indeed is the fastest track car of the 2014 hybrid hyper trio.

We want cold hard laptimes. We want McLaren and Ferrari to release whatever laptimes they got at the Nurburgring during their internal testing, as well as media access to these cars for competitive comparison tests with direct rivals.

We also wish that some of the P1 and La Ferrari owners will be less investment oriented and more open to the idea of subjecting their expensive four wheeled acquisitions to whole hearth-ed track testing by reputable, independent third parties.

We want that Porsche 918 vs McLaren P1 vs Ferrari La Ferrari test and we want it to be more than just gentle drive and a few eloquent epithets by some overly enthusiastic TV personality.

The 918 is as road legal car (and that`s what we talking about) the fastest on the track.
It was more than 15 seconds faster than the road legal P1. By the way: Aerodynamik Downforce helps you only when you drive fast and than it starts to slow you down also. What the most here dont get is, that overall the Porsche is the most powerful car in case of torque in the test and can use the front wheels to come out of corners much quicker and with grip. Torque ist very useful on a race track ... what helps it to reach 900 hp at 10000 rpm (for example) when you are going from corner to corner ? ;-) From technical point of view the LaFerrari and P1 are upgraded supercars of the old generation. The 918 is the first of the new generation. Guess which concept has more space to the top. Just sit down and compare the technic of the drive train 1:1. Than you will see what is the difference.

The Z06 is the beast to watch

Long term the Ferrari is fastest because of the huge power from normal engine. The car fastest immediately is the 918 undoubtedly. The fastest car after having a weekend to practice on a GP track, fastest could be the Ferrari with lots of power, less torque.

While everyone is obsessed about speed over one lap, no one is considering how long these cars can maintain top level performance, given that they all rely on some amount of battery power. If all are flogged in race mode for lap after lap, my suspicion is that the P1 will be the first to have to slow down as it does not have regenerative braking. But, it is only a suspicion - I would love to see a real world test on this issue.

It'll be a monster battle for sure... IF it ever happens.
I have a feeling one of these manufacturers won't want to play nice cough ferrari... But the entire automotive-world wants to see a proper 3-way head-2-head. It better happen! :D

If I must make a prediction, I'd bet the McLaren P1 is the fastest. But they're all so fast, none would surprise me to be the fastest.

Yes a pro driver such as Basseng and all three cars on a world class race track other than the full 'ring on a sunny dry day with all cars running their fastest setups. Oh yes...

The only way to find out is by a direct comparison by a top pro driver.
Like when Marc Basseng in 2008 drove Ferrari Enzo, Maserati MC12, Porsche Carrera GT, Pagani Zonda F Clubsport, Koenigsegg CCX.

And there are other racetracks...

But being faster doesnt mean the best. But as far as all 3 are concerned, The term HyperCar(Which i hate) and the 3 brand names are enuff alone to make them sell, Big power doesnt hurt either.

Lol, that is if they are actually confident, their car is the best. If not, why bother. At this moment, people will respect laferrari and P1, being both possibly the fastest, and the 918 being the most rounded and usable hypercar ever.

They don't need to prove anything more.

Idk if its all for the money, i mean they probably make a lot more money selling 458s than laferrari. These cars show what the manufacthrers are truly capable of and i think proving that they are among the fastest if not THE fastest by letting them race around different tracks would only do good for the respective company's image. Its surprising these cars are not racing to post the fastest lap time on every famous track cus i would think each manufacturer would want their car to have the fastest and most laptimes.

Yes all company are in it only for profit, I can see why, But as a True car enthusiast, Its a shame.

I pretty agree with the article, Its not fun, when potentialy 2 fastest cars in the world do not show any real numbers on track, or dont give any cars to tests.
But from company perspective - it doesnt matter- all cars are already sold - both P1 and LF, so what is the reason to show anything?

I think more importand fo MCLaren and Ferrari to save the "fastest car in the world" award, and its not the top speed, or straight line speed. Its mostly based on NR time, and some other tracks.

But Imo its more based on conditions, driver, and number of trays.

in other news: i'm now a member of germancarforum

But Mclaren HAS to do better at top gear, simply because they develop their cars there a lot. just look at the margin between the 12C vs 458.

I can bet, if Sport Auto will test P1 on hockenheim, it would be slower than 918 Weissach.
On Top Gear track Mclaren would be faster than Porsche.

Well as far as i've seen of these three hypercars, the P1 seems to be the best trach car as it makes the most downforce and puts power down better than many awd cars. I'd say around a racetrack with lots of corners and a straight or two the P1 would be the fastest. I don't think the 918 has the power to weight ratio to match the P1. And as for the Laferrari it would be astonishing if it can put its power down as well as the P1. And i think the P1 makes much more downforce at speed than the Ferrari? Correct me if i'm wrong.

I dont imagine the LaFerrari getting many laps, Just look how hard it was to get an ENzo round a track, Or to get one period, Hell even the GTO had shite for laps, As much attention as this Trifecta is getting, I dont see many, Hell if any track battles coming any if any, Time soon.

The Senna is not power limited. with some minor tweaking, it would probably gain ...

Yes I've known awhile. They are claims though, as it stands. And with theirs ...

something interesting i came across While the Jesko Attack with its XXL wing generates ...