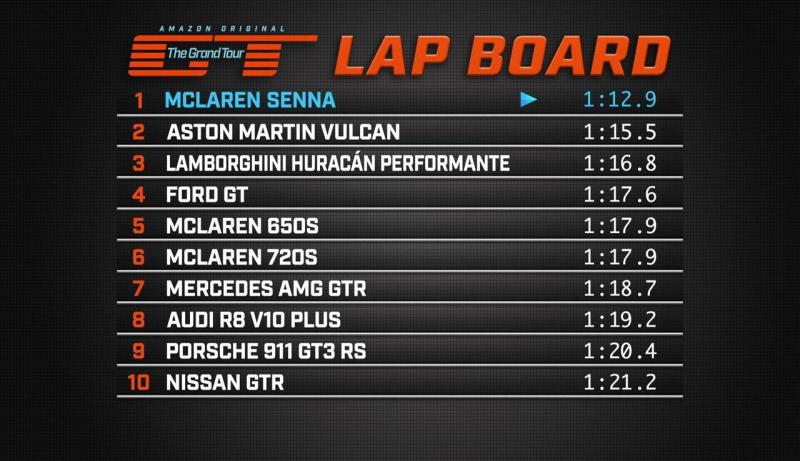 The Grand Tour is back and with a rather nice introductory Episode 1. This one was a little light on conversation and guests, but quite packed with action and beautiful film-making around the decaying (or transforming?) city of Detroit.

For a season kickoff they also had a new hypercar review by Jeremy Clarkson himself who drove the McLaren Senna around Thruxton and explained the philosophy and purpose behind the ultralight, ultra-high downforce evolution of P1.

Evolution of P1 perhaps is not correct way of describing the Senna, as it appears to not share anything with the P1 other than the engine architecture (flat-plane crank V8 twin turbo) and general engineering building blocks that all McLarens share.

With no doubt, it appears that, like the predecessor P1, McLaren Senna is prone to rewriting record books, at least the books of Fastestlaps.com fastest production road car records.

Like most new hypercars, Senna is precious and hard to source for risky all-out laptime attempts, but, surprisingly, there are already quite a few on this website, and all of them, one wet lap and Anglesey International withstanding, are new records.

What matters is not only to get the record, but the winning margin. Today's Eboladrome run is noteworthy because it improved previous best by 3.9 seconds, which is a lot for 2 kilometer (1.24 mile) track.

Bring a Koenigsegg Regera here and beat the Mclaren Senna. Or ANYWHERE else?

Very fast supercar....but the price is too high. With that money you can buy 3 supercars. You can buy the Huracan Performante, the GT2 RS and the AMG GTR PRO. It is amazingly fast...but the look is not that great...and the sound of the engine...same thing. So all this money just for being fast....no way.

the senna will blow away in the wind, also the racing driver senna was in my eyes a bully on track and a cry baby if he couldnt push his way to the front on track. senna reminds me of the modern day mercedes f1 team if we are losing we are cry babies lol.

totally unrealistic to test the senna 3.5sec/min quicker than a performante on a slow handling track, on any tyres. Quicker yes, but not by such a difference. These three were pricks, are pricks and will always be pricks.

Honestly this was what the P1 was supposed to be all along since mclaren said they wanted to make the fastest most driver focused supercar ever.

Impressive time! But the 720s seems to be a bit slow compared to that...

it's worth noting that the Vulcan didn't have a good launch due to lack of launch control, if the Vulcan and Senna had done a flying lap then there would've maybe be a different result