33 My Own Formulas That I Use In Determining The Theoretical, Drag-limited Top Speed 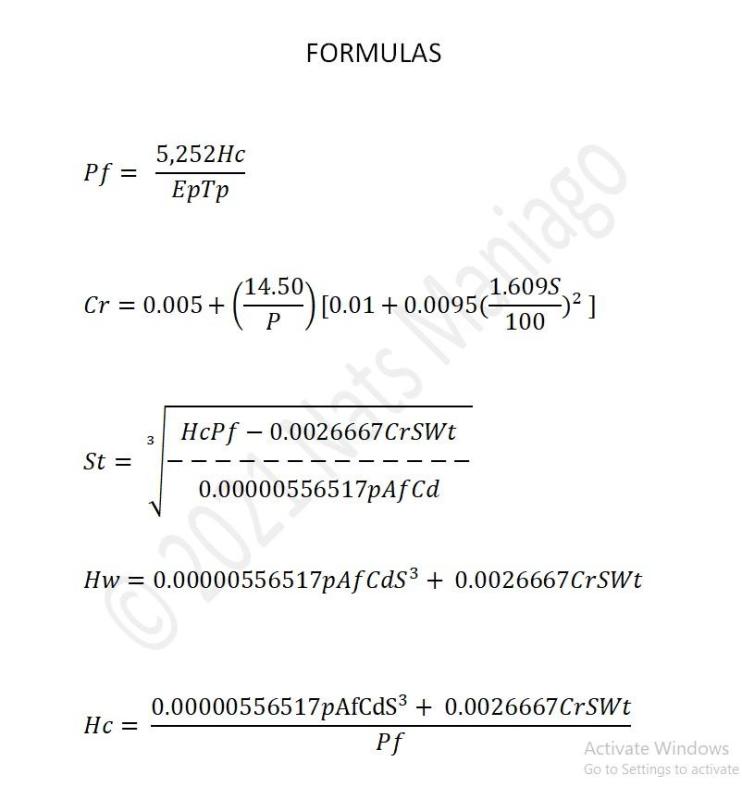 Solve for St or top speed by iteration:
First things first. Solve for Pf and Cr first using the Pf and Cr equations. In solving the St equation, iteration or trial and error is needed. First, make a good and reasonable first guess for S. A 10, 20 or even 50 mph error is okay since it will eventually converge or lead up to the right one in the end, maybe after 4 to 6 substitutions. Remember, the first result "IS NOT" yet the top speed. Now, substitute the obtained St speed to S in the equation again using the “corresponding” Cr for that speed and solve. Repeat the process for maybe 4-6 iterations until S and St are the same. The S will go up and down until it settles. To get actual Rho or air density, obtain it here by inputting some numbers or parameters: Air Density Calculator - What is the Density of Air? (omnicalculator.com) and convert the obtained〖 kg/m〗^3 by multiplying with this conversion factor 0.00000556517, or the obtained 〖slug/ft〗^3 by multiplying with this conversion factor 0.00286817, then substitute the result in the St equation and solve accordingly.
All equations or formulas are my version of well-known formulas—transformed, modified and converted. However, the Cr one is from: Rolling Resistance (engineeringtoolbox.com)
And for Rho or air density, I make use of this site: Air Density Calculator - What is the Density of Air? (omnicalculator.com)
And for recommended tire pressure and other information, the sites are: https://www.tiresplus.com/tires/tire-pressure/inflation/ and https://tirepressure.com/
And for past weather for a specific place, I use this site: https://www.timeanddate.com/weather/usa/los-angeles/historic

Things to bear in mind:
1. The Hc (crank or flywheel) and Hw (wheel) equations have 2 components--the 1st one has to do with how much power to overcome air resistance or drag, the 2nd one is with the rolling resistance. It is said that there are at least 3 or 4 "resistive" forces acting on a moving car--air resistance or drag, rolling resistance, gradient and lesser known applied inertia. Since top speed is supposed to be run on a flat and level road, gradient is not included in the computation and at top speed, acceleration is absent.
2. It seems the problem child in top speed calculation is the coefficient of rolling resistance, or how much. Usually, anywhere between 0.010-0.015 is used by many. There are a lot of formulas and equations out there about Crr. Some would give low figures, some would give really high ones, reaching 0.100 or more on speeds of 300 mph or more. Using high values such as 0.050 or whatever instead of the "standard" 0.015 or so would result in "lower" top speed. In my case, I don't use the low standard numbers but instead stick to what the formula dictates based on speed, tire pressure, size and rating, weight or load on the vehicle, weight distribution and corner weight, including the driver and down force, if any. Mind you, all of those affect rolling resistance, which in turn affect speed or top speed.
3. Regarding drag coefficient, manufacturers usually only give it with 2 significant figures, like 0.30 or what have you. But just because it is 0.30, it doesn't necessarily mean it's exactly that. For all you know, it could be anywhere between 0.295 and 0.305, and that 0.01 difference could mean a few horsepower or miles per hour error or difference in the calculation. So is with the frontal area and others. Take note.
4. Tire pressure alone would affect the top speed or result. Usually, driving at normal highway speeds, say 70 mph, only requires recommended tire pressure, such as 30-36 psi, depending on the car and its tires. But if it is to be driven at very high speed, say 150, 200 mph or more, those same tires would have their tire pressure increase to say 40 or more. Super or hyper cars running 250-300 mph have their tire pressure as high as 50 or so!

Top speed could be drag-limited or power-limited, rev or gear-limited or governor-limited. My calculation has to do with drag-limited. Oftentimes, car manufacturers would say 155 mph, and it usually mean governor or electronically limited. Its actual top speed may as well be 170 or more! Also, top speed could be limited by the tire rating, so at times the published top speed is lower than actual because of the tire limitation. So much confusion.

Using the figures below — specs, parameters and the actual weather condition of the run, using my own formulas, I calculated the top speed of the Bugatti at 304.34 mph which is pretty close to the published one. The theoretical and the actual just jibed. I've used my formulas many times, including on my own cars and other publicized ones and they seem to be accurate. It's important to have accurate numbers, and the actual Rho or air density is crucial, not to mention the drag coefficient, frontal area and often overlooked tire pressure and coefficient of rolling resistance or Crr! The weight of the car and the driver are not that significant or game changer, but the downforce, especially if it's in the hundreds or a couple of thousand pounds greatly affect the outcome. Just my take. You don't have to take my word for it I know. By the way, the powertrain factor is not necessarily the powertrain loss, though it seems it is. I can't divulge how it got into the equation. I'm just sharing my equations.

Remember, St and S must be EQUAL, or at least no more than 0.1 mph apart. That is partly due to rounding off errors.

Hw = Wheel horsepower
Hc = Crank or flywheel horsepower
Af = Frontal area in square feet
Cd = Coefficient of drag (unit less)
Cr = Coefficient of rolling resistance (unit less)
Pf = Powertrain factor
Ep = Engine revolutions or rpm at peak power
Tp = Torque in pound feet at peak torque
Wt = Total weight (curb) of car including driver (usually 165 lbs) and downforce, if any, in pounds. You can use any weight for the driver.
St = Top speed in miles per hour
P = Tire pressure in pounds per square inch (I usually use 42.5 psi. Use whatever is required.)
p = Rho or air density in〖 kg/m〗^3
S = Speed in miles per hour

Continuation of #4:
And in doing so, the top speed is increased as a result, or the top speed calculation result jumps up, if you will.
5. Last but not the least, Rho or air density, temperature, elevation with its air pressure, humidity or dew point, gradient, aside from all the others I mentioned earlier--all come into play in these calculation, not to mention the car's transmission and axle or differential with their gear ratios--whew. Significant digits and rounding off errors must not be overlooked. To get the actual Rho or air density, obtain it here by inputting some numbers or parameters: Air Density Calculator - What is the Density of Air? (omnicalculator.com) and convert the resulting〖 kg/m〗^3 by multiplying with this conversion factor 0.00000556517, or the resulting〖 slug/ft〗^3 by multiplying with this conversion factor 0.00286817, then substitute the result in the St equation and solve accordingly.
6.* According to Michelin: “The rolling resistance of a passenger tire changes little with speed up to about 75 mph, and then increases significantly. This increase is due to the increase in aerodynamic drag of the rotating tire (this force increases in proportion to the square of the speed) and the development of strong vibrations at high speeds. The tire becomes severely deformed, leading to greater energy dissipation. A tire's rolling resistance coefficient decreases slightly as load increases because visco-elasticity decreases as temperature increases. However, the rolling resistance force (the result of load multiplied by the rolling resistance coefficient) increases with load. This is because a heavier load causes more bending and shearing. The rolling resistance coefficient of a tire decreases as its outer diameter increases. This is because the bending of the tire on entering and leaving the contact patch is less severe with a bigger diameter. Increasing the tire diameter by 1 centimeter reduces rolling resistance by about 1%. Also, rolling resistance increases rapidly as tire pressure decreases and vice versa. As a consequence, a higher tire pressure up to its maximum limit increases a car's top speed because of lower rolling resistance and vice versa.”
Note * Taken from Michelin

On the drivetribe site, I only used the frontal area of Chiron’s 2.10 sq mt or 22.60 sq ft instead of the slightly smaller Veyron’s 2.07 sq mt or 22.30 sq ft. The rest like air density or rho, elevation, drag coefficient, rolling resistance and others were taken from others like the websites included. On the timeanddate site, knowing only the date (August 02, 2019) of the test run without the time, I just made an educated guess by the length and direction of the shadows of the crew in the video, and used the 10:50 AM weather conditions. With regards to elevation, using Google Earth Pro, I just averaged the highest and lowest points of the track.

NOTE* Please do not plagiarize. They are "copyrighted" as you can see. Thanks.

Thanks for the link. Looking forward for measurement tests.

Well that's the next thing to address. But first you set your baseline. We've ...

In general, I have a feeling that at this stage of technology development, electric ...

Where did you find the information that its top speed is ...

You are basically repeating my words. «SF90 will destroy Speedtail in ...