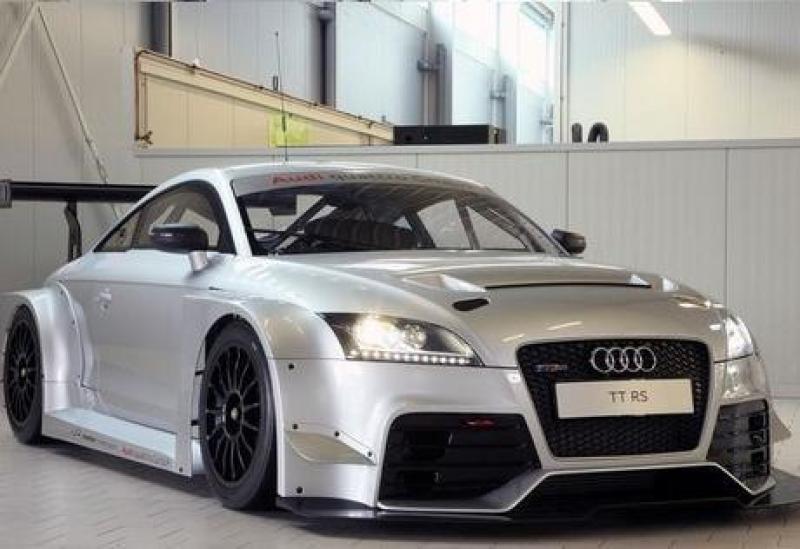 SportAuto magazine and Reader Motorsport - a race and tuning company that participates in VLN Northloop endurance series and 24 hours of Nurburgring with cars like the Gallardo, Ford GT and Audi TTS, showed Sport Auto what realy makes a car fast...

SportAuto and Reader Motorsport met at the Hockenheimring with a stock 272PS TT-S with S-Tronic gearbox. The car was sponsored by a local car dealer and showed up on worn-out Pirelli Zero Rosso tires.

Without any modifications, the TT-s lapped the Hockenheimring in 1 minute and 17.1 seconds. This laptime was used as reference for the rest of the day. Fortunately, because of clouds, the temperature did not change during the day, so all laptimes were driven under same conditions.

Now the work of Reader Motorsport could really begin...

Reader chose 9 x 18 "Rial GTR", which were the same size, yet 10kg lighter than stock. The Pirelli rubber was replaced with "Dunlop Direzza-Pneus" semi slicks. These mods alone allowed for a laptime of 1:15.1 - 2 seconds faster than the reference time.

The driver reported that car felt completely different - free of understeer and willing to move exactly where wanted. However, tyre wear and tyre temperature readouts showed that there is still much potential left, because of the “soft” nature of stock suspension.

The car was then changed back to stock wheels and tyres, but this time there were engine modifications.

Engine and DSG tranny remap, in combination with other changes (such as torque limited delete) raised the power output to 315hp (272 stock) and 420Nm (350 stock). Improvements on straight line performance were quite evident - 0-100km/h 0.2 and 0-200km/h 2 seconds quicker than stock.

The suspension was changed to a KW coilover kit. The car was lowered by 3 centimeters and received the standard Audi axle geometry.

New laptime - 1:16.5... No improvement? Raeder Motorsport explained that the tyres were the limiting factor even when the car felt much better and more direct. The trick was to set-up the suspension to work with the tyres. This is where you really need knowledge and skill to get the most out of the car.

The goal was to get the car into a crossed wheel balance. With a front-heavy car like the TT, it is impossible to get 50/50 weight distribution, yet it is possible to get a 50/50 diagonal crossed weight balance with nearly the same effect. Goal - neutral handling and willingness to turn into corners.

Result of the fine-tuning of the suspension - 1:15.6 - nearly one second just from the right suspension setup.

After replacing the stock Pirelli tires and stock wheels with the Dunlop Direzza-Pneus and Rial GTR wheels the laptime shrunk to impressive 1:13.2.

The TT-S with 8500 Euro worth of modifications was already faster than M3 on semi slicks, Carrera S PDK on semi slicks, CLK 63 AMG and, more important - these changes turned the TT-S into a pure driver's car.

Reader installed a MovIt performance brakes at the front axle, reducing the weight by more than 10kg because of the lighter aftermarket parts. In addition to that, they sent the TT-S on a quick diet, which reduced the weight further by approximately 100kg. Most of it come from the interior - stock seats were replaced by Recaro buckets, the rear seat as well as some other interior parts were completely removed.

After some roll-in laps for the new brake system, they put new Dunlop Direzza-Pneus on the car and went for the final time attack.

Raeder used the same engine modifications for their VLN Audi A3 with 330hp where the engine did over 10,000km in race conditions without any problems.

very interesting article, although the lap times should be given the benefit of the doubt quantified in a at least +-0.5 since they each have been timed in one attempt, i suppose. it would be nice to read more in fastestlaps about the relations between car modifications vs. lap time response.

Having driven and been the owner of both a Cayman S and Audi RS toys, not sure I really agree with you...The Porsche is so easy to drive fast...where is the reward there? I really would not say that a Cayman is a loooot better than TT-RS anyway...

The Porsche Cayman S / R is so much better than an Audi TT-S / RS will ever be as a driver's car. The Lotus Evora S is certainly a great driver's car and arguably right up there with the cayman performance wise but the Cayman wins as the best overall package. The Audi is all about the numbers with it's AWD, 7 speed dual cluth gear box, launch control and so on. Great for numbers not so great as a rewarding drive.

This was not just about extra horsepower.

Any turbo car has potential

And for who wants to read what testers say about the Evora S vs the Cayman (S or R)
http://www.automobilemag.com/reviews/driven/1107_track_toys_porsche_cayman_r_vs_lotus_evora_s/handling.html

@true& Fastestlaps: if you pay attention i refute the bullshit some people try to pass off as truth on this website.. if they stop writing crap i can stop correcting it...

I don't even hate Georg, just see him write completely subjective statements that contrast strongly with what people that know write, or even stone cold facts. Needless to say i don't care for people that are dishonest.

I don't hate VW, Bugatti, Audi, whatever car(brand). Doesn't mean i have to appreciate the character, or the selling proposition i believe....
VW=overrated and overpriced in my opinion, same goes for Audi (although the styling of some is good and in general seldom off-putting).
I my book you'd have to be nuts to waste money on a Veyron, i'd rather spend that much on fun cars (yes plural) and although its quite an engineering achievement its not a real drivers car more technical tour de force, and i think its pretty ugly to boot.

Write what you will about me, it says much more about you than me, and people with some intelligence and an open mind reading things on here will know. Not that i care much about people judging me on here.

@Georg: The whole backseat of the Audi was taken out, all of the upholstery from the luggage compartment AND THEY EVEN USED TYRE-HEATERS to warm up the brand new semi-slicks to the perfect temperature so they didn't even have to drive a warm up lap on the new tyres.
The Evora (not s) was on par with the Audi TT-RS in the comparo SportAuto did on normal P Zero's and they give it 9 out of 10 points (like the Cayman S) as upposed to the Audi TT RS's 8 out of 10 for DRIVING FUN.

Other than that EVERY SINGLE TEST i found where an Evora S was put up against a Cayman S or R the testers write the Lotus is at least as much fun and as capable as the Porsche in the handling...
p.s the Lotus is too expensive compared to the competition, but against a TT RS the tested cars where less than 7k apart..

Autocar tested a Evora S against the TT-RS and it beat it on the track despite a crappy toyota gearbox and less straightline performance.
You're getting pathetic.

This report is from a old Sportauto issue. http://www.sportauto-online.de/testbericht/tuningtest-audi-tts-teil-1-wie-wird-der-272-ps-allradler-schneller-1037292.html# And i am pretty sure will NEVER become a 'pure driver's car' simply because of its inferior four wheel drive. The evora will be much more fun to drive.

w0o0dy hates VW AG and hates all who like VW AG :D

perhaps one day EVEN YOU WILL UNDERSTAND what you read...

the TT-S with all the modifing able to run 1:12.0 min laptimes (1.2s quicker than you handling wonder wannabe) costs 58500Euro... 46,500 base price + 12,000Euro for the wheels, suspension, engine modifications and brake system..
and I wouldn´t call the cabine of the stripped TT-S with Recaro seat uncomfortable or lacking luxury.. 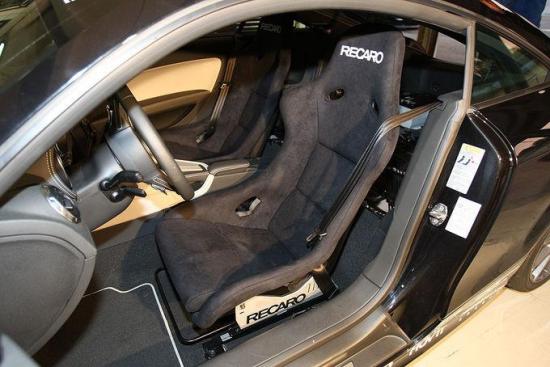 and again you wanna be expert... the Evora S base price 69,990Euro is not able to do a 1:13.2min!!!
The tested Evora S which did the 1:13.2min was loaded with 17,625Euro of options (more than the modification at the TT-S costs) including many perfromance options like semi slicks, lightweight bucket rear seats replacing the normal rear seats (3510Euro) etc.

Woody shut up, he's just sharing a cool story about tuning a car up. You're the fanboy, not him.

@Matt
the avantime was an ambitious but failed project!

Funny how Georg measures Audi's against a different yardstick than other brands... a 1:13.2 by a standard Lotus Evora S with corsa's does not make a great handling car.. An Audi TT-S with tuning and a track only setup by race-mechanics does the same laptime on semi slicks and its a marvelous pure drivers car.
At 315hp and minus 100kg the TT-S has the same power/weight ratio and with aftermarket brakes, rock hard track set-up and semi slicks it wins no more than 1,2sec against a coupe with luxury, great ride comfort, equal effective handling and semi's...
The fanboy in dear Georg got the better of him again. But the test from Sportauto with reader motorsport was interesting by itself...

lol, maybe with neon lights, a huge rear wing, golden paint, and a PS3 at the interior.

If they added stickers, they could shave off another 2 seconds per lap....

At least this shows what real tuning car do to a cars performance not the rubbish that top gear did to that poor renault avantime!