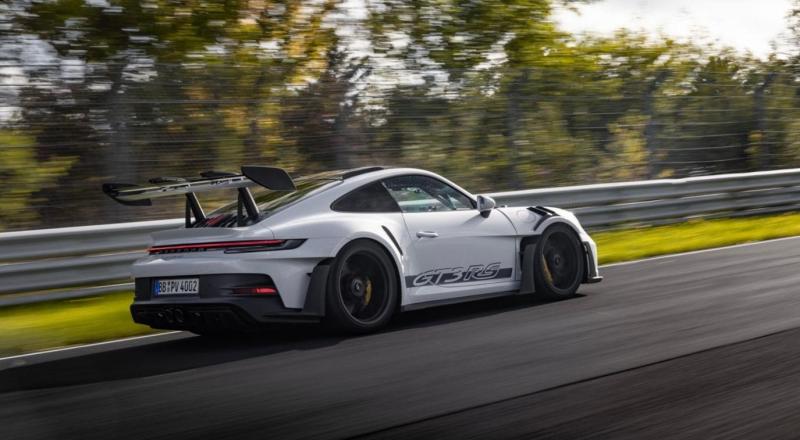 Jörg Bergmeister and Porsche 911 GT3 RS did come very close to de facto production record with a very respectable 6:44.85 - just 1.2 seconds off the AMG GT Black Series and 1.6 seconds slower than McLaren P1 LM. The LM may not even qualify for road/production car record, depending on who you ask, while the AMG GT has 200 extra horsepower - huge difference for a track that does have fast sections that need power.

It is hard to tell whether the emotional gasp at the end of the lap was from joy or disappointment, having missed the absolute record by less than 2 seconds, but one second over nearly 7 minute lap is almost negligible - so insignificant it would even make sense to build a production racing series with AMG GT and 911 GT3 RS as equal car choices.

Moreover, it is possible that 911 GT3 was side by side with the 730 PS Mercedes even as late as the beginning of the last straight. Extra 200 PS delivered additional 24 kph for Mercedes and this is where most of the 1.2 second difference was made.

Special thanks to TypeF173 for the heads up on the leak (this laptime was added to Fastestlaps.com day before it was revealed by Porsche) and Porsche for timing and publishing lap times on both 20.8 and 20.6 km layouts.

gt2rs might do sub 6:40 idk what manthey racing is gonna create

GT2 RS will beat them all

shows how more power makes such a big difference.
congrats porsche for doing such a amazing time

Impressive lap time although this was expected judging by the very radical approach Porsche has taken. The much more street-friendly 992 GT3 was already very fast so everything else would have been a disappointment.

Just as i predicted!! An absolute WEAPON!!

This thing is an absolute beast, as expected. I'm kinda hoping Chevy releases a more track focussed version of the Z06 (like a ZR1), but keep the same N/A engine. Would be cool to see Chevy and Porsche put their all into building a similar vehicle and see how they compare on the ring

BTW... what's with the title being wrong? it's the gt3rs not the gt2rs.

Supposedly, that day it was extremely windy conditions, so it hampered the lap. Slightly better conditions would have been faster than the AMG GT BS record. But again, a lap is a lap, and conditions might not improve till next year. maybe they might come back again, like what they did with the GT2RS MR.

Not a production car.

Anytime man! as you know, or DON'T know (😂) Fastestlaps has almost online, become like a second home when I'm in cyberspace.~Data, I like! (It was because of the trash written about Bugatti primarily.)

Anyway the Thanks are with the Porsche guys elsewhere too, quite rightfully, but I'm sure over time I've positively participated. (And there is some exclusive stuff I'm working on!)

But back to the point this is a legendary achievement from Porsche and anyone saying different is cluelessly misinformed! Well done Porsche and GT3RS!