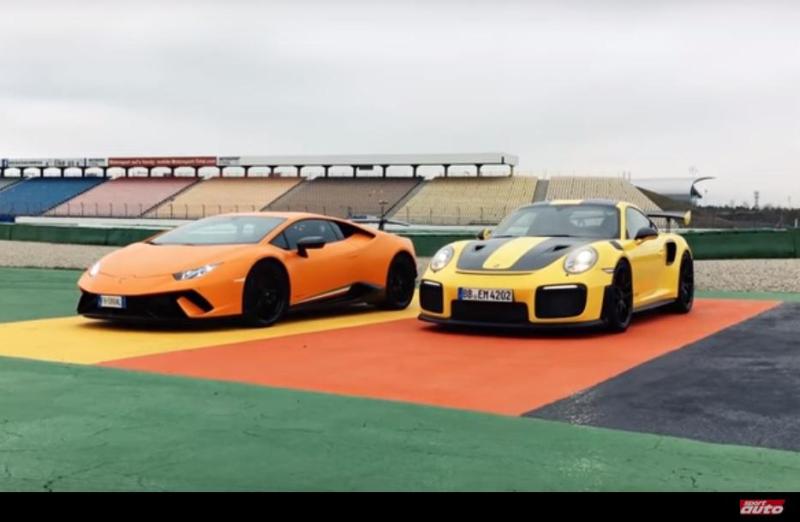 Porsche beat Huracán by 1.7 seconds. In relative terms, this is more impressive than beating Performante at Nurburgring by 4.7, which was only 1.2% improvement. 1.7 seconds over a short lap around Hockenheim Kleiner Kurs translate to 2.6% difference.

Here is the Sport Auto video with full onboard footage for both lap times. To see updated list of all Hockenheinm laptimes, head over to Hockenheim Short track page.

Just a little side note, the GT2 RS was using developmental tyres which aren't available yet.

Sure GT2RS was faster (the real diference between the 2 is may not that big, consider analysis of Dr. Duke below). But the GT2 RS is more like a "phantom car" with 500 pieces build -> its more a financial investment (price will probably explode!!) than a track tool I think. You won't see many for sure and you have pretty much no chance to get one even if you would like to. The Lambo is a car you could buy straight from the factory if you can afford it.
My favorit is still the 720 "At the wheels ".... holy shit. Autobahnkiller

Somebody should put the GT2 RS on dyno... the legendary "Porsche horsepower" probably are factor too.

Sometimes a car gives a driver more confidence to be able to push the car harder. It is possible that the gt2rs was more stable in those sections which allowed him to push the car further. Also the huracan lap was still a record time faster than all other cars so he wasnt exactly driving slowly. Just not as fast as 911 gt2rs which clearly is a track monster. Which is impressive given its still got a 911 engine layout which is technically not the fastest layout to have!

another win for a german car by a german test driver ? lol

germans do not consider lamborghini arian enough, still. It's mixture of inferior races not a pure, arian race like porsche.

He was just twice totally off track. But there is still some space in the Nordkurve for the next gen Porsche (to take a wider turn). If this would be done during a race event it wouldn't count.
The Lambo lap on the other hand wasn't nearly as good. Besides he didn't cheat with the track limits he made some mistakes: braked too early before the Nordkurve, poor line through the Ameisenkurve and the Südkurve was just extremly bad. Here is the data recording:
https://ibb.co/kEhQ2w