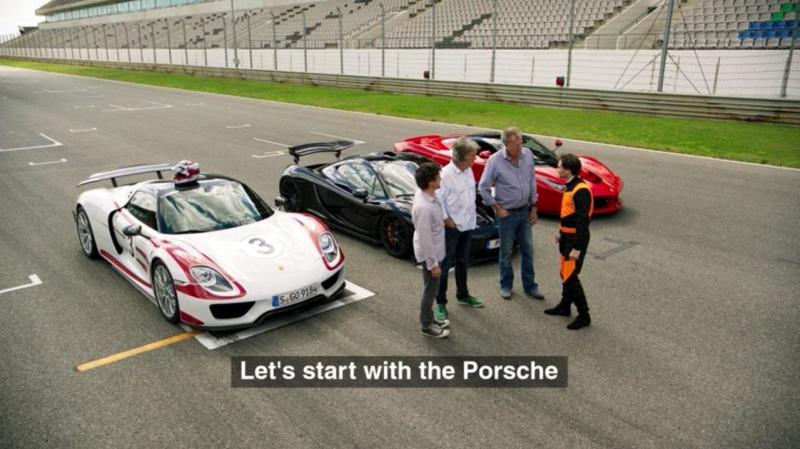 Porsche 918 beats McLaren P1 and Ferrari LaFerrari again and This time on biggest stage possible - the Grand Tour show. This victory was, certainly, not easy, as the second place Ferrari LaFerrari was just 0.2 seconds behind.

Ferrari was the big surprise and seemed like the real over-achiever to me. It not only beat the McLaren P1 but did it (presumably) with no factory assistance. Both Porsche and McLaren sent their engineers to work on setup for Portimao.

Last place for McLaren P1 is not something that I or (certainly) Jeremy Clarkson, was expecting and I do believe that Jérôme d'Ambrosio didn't do a particularity great job with that car, as it seemed to power-slide around some of the slower corners too much. Maybe it's all down to tyres, and you absolutely need the Trofeo R to make McLaren P1 work in track mode.

Just saying what others would say if it was one of the other cars that was crashed. There's no telling what it would do to suspension geometry. Could it affect the result? Possibly.

It lost but it wasn't the fastest lap by any of the cars and crashing into a gravel pit never helps set fast lap times.

...Buuut you havent accepted that it lost, If it had the faster laptime, You wouldnt even be wasting your time trying to prove standing vs flying start times, Nobody here but you is going on about that

I do accept that the P1 lost but I like tests to be presented factually, and there is now incontrovertible evidence that it was a flying start and that checkpoint 1 is in a braking zone.

Just let it go mate, Just except it and move on, Theres really no point in debating, Flying, Standing, I highly doubt the outcome would be any different. Just let it gooooooooooo..

And only an idiot could still go on and on, not accepting the conclusion of this test. Stop crying.

Only an idiot who can't understand simple evidence would see no evidence. People made the assertion that the cars accelerated all the way to checkpoint one. This checkpoint is 460m from where GT allegedly started. After 460m, all 3 cars would have been doing >150mph (241kph). Hence it is in a braking zone. And by shear coincidence, the LaF trap speed is identical to the speed Harris is doing at this point (200m marker).

And oh Rafael de Simone lapped Portimao before Harris to find out what a good lap was. You think he'd let Harris away with running 6s off the pace? I don't think so.

Doesn't change the fact the P1 lost on that day, no. But it does prove that it was a flying start and hence that the lap times were all slower.

I see no evidence. Just a P1 that lost.

Well here's categorical proof that the Grand Tour laps were from a flying start beyond all reasonable doubt.

Note pit exit, kink in lane before exit and checkpoint 1.

Note distance from alleged Grand Tour start point - 460m. It represents about 11s of acceleration, even with a 10s 400m time. So all 3 cars should be well above 150mph (241kph) by this point, if accelerating, yet none were.

And various over the years, Quite alot done to it, Havent changed outside looks other then color in the last few years.

Could you actually tell the difference? If someone were to use Corsas vs Advans vs Sport contacts could they tell? I personally prefer Advans as my choice for tyre since I've been running them on my R34 for the past few years with varying sizes.

The AMG GTR proved that you can't judge Cup 2s by their tyre wall, and ACR V720s proved you can't judge a tyre by its UTQG. A bespoke tyre is basically a modified tyre, and like modified cars, the stock namesake often bares no resemblance.

Alexander has also specifically stated that he'd prefer Cup 2s to Corsas in his YT comments.

You're also assuming all cars would benefit equally from Trofeos, they won't, RWD cars will benefit far more because they are more challenged on the traction front, especially if they have ridiculously narrow tyres relative to hp and weight like the P1.

not really, consistent drivers like chris harris or users on Fchat prove that the trofeo R is usually 1,5-2 seconds a lap quicker on 1-1,5 minute circuits

They've completely confused me this one man!🧐

How does the Mclaren 765LT independently tested and verified numbers compare ...

My god, that must have been some serious granny shifting to ...

jeremy do you approve of the ev6?

I'm not watching it!

I mean it's just weird pairing!😂

I think they are excluded altogether. It would skew results if wet vs dry ...

the point was to see if an electric kia could come close to a ...