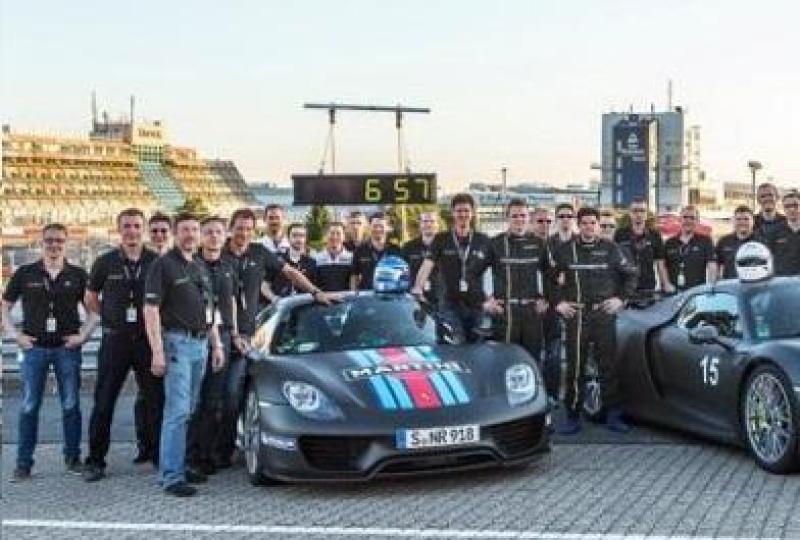 Time and again I am making these "something breaks Nurburgring record" articles and each time these are special times for FastestLaps.com.

This time is even more special than others before it, because broken is not only the lap record but also the 7 minute threshold - with a laptime of 6 minutes and 57 seconds, Porsche 918 becomes the first closed top street vehicle to finish a lap of Nurburgring Nordschleife in less than 7 minutes.

In this conversation I am, of course, disregarding the 6:55 and 6:48 of Radical SR8 and SR8 LM, simply because these cars are in the grey area of what can and can't be considered as "street legal", and they certainly don't have basic equipment like radio or heater or even roof and doors.

Here is the on-board footage of record lap. Porsche have also released a press release for this achievement, and there is extra footage showing the 918 team celebrating the achievement.

I am very happy about Porsche, but something tells me that these celebrations could be short lived. It is already well documented that McLaren are very interested in Nurburgring records also, and McLaren P1 certainly has what it takes to challenge the 918.

If not the P1, we also have the Ferrari LaFerrari, let's not forget!

Pretty good time they have managed...!
But I can't get a thing - the Zonda R is faster on the Nurburgring despite of the fact that it has lesser horsepower, lower revs (than a 918), only RWD, no Hybrid technology, no 4 wheel steering. So on paper the 918 has a lot more. Still it is around 5-6 seconds behind. How ??

I get the feeling that the lap time wasnt as good as anticipated and with mclarens racing pedigree they always want to be first and are perfecting the version that they are using on the nurburgring. Maybe it was slower than a porsche 918 but I'm sure they probably want it to beat the zonda r. But that 6;47 time is gonna be hard to beat, its held the record for more than 3 years! Which is why its still my favourite zonda.

The p1 set a sub seven record but they didnt say the exact time,,, they couldn't break the record

Does anybody else remember what a FULLY built Carrera GT price was? I know it was $440,000 in the US when it was out, But I don't know what you could order on it at the time.

Amogh THE AMG CR  9y ago

Somebody has to get THE STIG to drive a laFerrari and a p1 around the nordschliefe and the world should watch it.

If has started spreading on internet. P1 has run 6:47 on Car Buzz. It should be confirmed tomorrow. Hopefully a video is with this time.

McLaren seems a bit concerned, rumors running around is that they can't break the 7 minute barrier, only 07:04 according to some sources, which is a problem considering the P1 is more expensive and the hybrid system is not nearly as efficient as the Porsche.

And @Piorun if you hate the German way, just don't buy German goods and stop complaining, the rest of us are happy paying for good engineering.

Damn, I can not wait to see the P1 and the LaFerrari doing a laptime at the Nordschleife... The wait seems endless...

Doesn't matter if the 918 is hybrid, so what if you can drive it electric mode. It's still overpriced like crazy. If you want a hybrid and a sports car, you can buy GT-R and a Prius and have enough money left over to buy a mansion.

OK guys, ofcourse, development costs can be crazy.
Propably i were misunderstood. Anyone who want may buy this car, and enjoy it by his own way.

In free market any price is good if there is someone who want to pay, no matter how much and for what.

For someone it might be worth every penny.
For others, its nonsense to spend so much on car anyway.
We are all free to do what we want and think what we want.

That makes Zero sense... 918 is way more superior just in every aspect (except the practicality). And 600 wild horses would be enough to defeat the GT-R, doubtless.

Again, with all the years of development, the best materials it uses, the complicated ultimate hybrid-system and all its exclusivity, it surely costs more than 800k. Yeah, and be sure, if Nissan developed its own hybrid and put one in a GT-R (..imagine how much would it weigh..), it would be not that bargain as used to be.. - 200k minimum. And still Nissan would lose money setting that price list. And nobody gonna buy a GT-R for 200k bucks.. except it would be a special exclusive collector's model.

"Spending 60k on a paintwork is extremely stupid"

Moreover, you can paint yourself pretty much the same colour/quality in some garage for much less money.

In this way of thinking some1 could compare Bentley with Audi A6...Both cars are luxurious...but one of them is much better...

GTR is a very fast and very nice car but it will never be a Porsche or a Ferrari..

And **WHY do think GTR is relativly cheap ?

Voice of Reason  10y ago

@Piorun
I agree the car is very expensive compared to a GTR however it isn't bad value if you can afford it. Look at it this way:
They will only produce the 918 for a year and sell 918 units globally.
A GTR has averaged around 1300 units a year globally, and will be on sale for about seven years so about ten times 918 production, 9180 cars.
Divide the 918 price of 850000 by ten you get 85000, which is far less than the US price of a 2014 gtr. So you see, the 918 is actually better value despite being far too expensive. ;)

lol @Piorun, u are a complete moron.
its not about the performance the car offers. its about the development costs and materials used in such a car

the LFA for example costs around 500k, but its production costs exceeds that. so actually lexus loses money on it. the same with the veyron. its production is more expensive than what it sells for.

so telling that the 918 is a rip off is plain ignorant and stupid.
its pretty likely that the 918 hits the 800k range in terms of production costs

u know not much about cars and car collection... they build only 918units of the 918... it will be for ever exclusive... it will never loose money! It is a collector car that will gain worth over the years...
u buy a cheap GT-R and after 10 years it is worth nothing... u lost all ur money... a 918 owner can sell the 918 in 10 years most likely with a plus.. now who is the smarter one of u both... the rich guy able to buy a 918!
Next to that no matter how much money u spend on the GT-R u cant drive a single mile in electric mode... u dont get such low emission and such a MPG with a GT-R. In many green nation u cant get into city with the GT-R because of the emission regulation...with the 918 u can.

Porsche always build cars with endurance in mind... they are no one lap heros ... if both cars should do 100laps on the northloop I would bet my money on the 918 that it will finish first. If both cars should lap 100laps with a limited amount of fuel the 918 would blow the GT-R out of the sky into hell.

Cant say there all about the money, they do make 30k cars that are quite good in every aspect, But I do agree there one of the more money orientated brands, rip offs? No, certain cars maybe.

But I don't agree with how HUGE the prices are on the options of the 918. I mean 64k for paint? That's ridiculous, even if it may be some special shell protecting kind, I could get a Audi RS5 for that. I was never bothered by Porsches options list, but I am by this ones, But it REALLY does seem like there just pulling number out there arse simply because they know people will by them.

I would like to know the real reason as to WHY everything is so expensive.

Im also curious how much there gonna charge for those red and blue decals on the car, hell Ferrari charges 8k for Scuderia stripes...