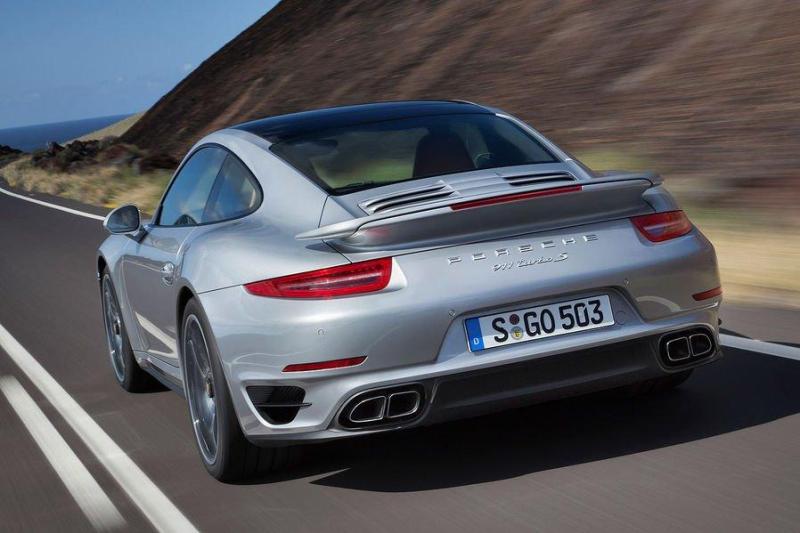 Rear wheel steering, widest 911 body in history, movable front splitter and 520 or 560 metric horsepower for the Turbo and Turbo S.

Porsche has just revealed the next generation 911 Turbo and I am just wondering, if those horsepower numbers in fact are what Porsche wants you to believe they are.

This has been the case with cars like Nissan GT-R and Audi S8 where independently measured wheel horsepower are much closer to official crank power than they should be.

I find it hard to believe that next generation Porsche Turbo has the same peak power as previous generation. To my knowledge, this has never been the case in past.

Is Porsche trying to "pull off a GT-R" by publishing conservative or, perhaps, significantly lower power and acceleration figures, just to make the impression that their 520 horse car beats Nissan's 540?

Such impression would lead many to believe that it's the "superior engineering" that makes the difference. Or that rear engine sportscar was not a bad idea to begin with and modern Porsche 911 is more than just "damage limitation" and making the most of inherently inferior design.

Its all silly
People usually focus on how much power the engine has. But its not about power its all about torque, and not only torque, but also, torque distribution as a second importand thing.
The third element is traction - AWD, and fourth the gearbox - new DCT transmissions give that constand torque delivery.

And thats all the magic. Peak Power its just a part of it.

Well, I just bought one, the S and it's far superior to the 997 Turbo and the 996 Turbo that I gave up for her! Drives as small as the 996 and doesn't feel like a house with rockets like the 997 and it's the best so far!
Sure, the 997 Turbo I had looked the best but it didn't have the carnal touch that they've finally gotten back in the 991! It's as real as the fantastic 996 Turbo and they're are no better! Love her!

@ Voice of reason: "If only, I mused, I could control the power my cars producing? Then I found this pedal on the right and have been happy ever since"
I can't argue with that, I actually sat for a minute trying to think of a response, I agree with you there, that pedal on the right, which I think is called the accelerator, or gas pedal has always made me happy. You're kind of strange, but then again, so am I. ;)

@shaggy
I mean it goes BOTH ways! It's a TWO way pedal! Genius! Now if I can just figure out why is really noisy when I go above thirty and stalls when I park.

@Shaggy
No I'm serious. I was driving my car the other day and I thought cars are too powerful and that's why Porsche downplay their power ratings. If only, I mused, there was some way I could control the power my cars producing? Then I found this pedal on the right and I've been happy ever since.

@ Voice of reason: "More power is always a bad thing every time I drive a performance car I think why doesn't it have less power." You're not running on all cylinders are you? Or are you being sarcastic?

@ddd
I agree more power is always a bad thing and every time I drive a performance car I think why doesn't it have less power. Also the different car models are just there so that drivers of different abilities can pick one that suits their driving abilities not so Porsche can market slightly different cars to customers with massively different budgets.

Hmmm i think that Porsche and Ferrari dont put to much power in their "normal" cars coze it is not needed since cars like 911 Turbo/S, 458 , F12 are already incredibly fast. To much power could make these cars worse.

@ddd: to be honest, I think Porsche 911 turbo S may have a lot more than 800 hp... And I suspect Porsche has cheated about real new turbo and turbo s power...

If i have to be honest i would like to see a Porsche and Ferrari with realy tremendous power...

Then these cars would be realy on right level in comparison to hypercars.

BUT Ferrari and Porsche done take part in hp contest :). We must be happy with modest power of F12 Berlinetta and 911 Turbo S. We can do nothing.

I would add that cars like Ferrari 458, Porsche GT3 RS 4.0 in general are in worse situation than 911 Turbo/S , GTR, Mp4-12c...even if cars that are tested by big magazines are "better" than "normal" version it will not be a big diffrence since GT3 and 458 have n/a engines.

We have another situation when we talk about turbo engine cars...then even 60-80 hp boost is easy like nothing.

Ferrari with turbo engines would be insane when we talk about performance in straight but there is another side of that problem...

Ferrari's N/A engines are outstanding and despite moderate power and low torque Ferraris are damn fast and haver amazing sound and throttle reaction.

i was implying that the car he's talking about is stock while the press car is tuned to have better numbers (either around track or acceleration, depends on what ferrari sets it up to do) .

Lafars it's an old story and an old debate. people believe what they like, we live in democracy.
I give you some V-BOX customers datas to play with, much better that the very same stupid C. Harris's article.

i was implying that the car he's talking about is stock while the press car is tuned to have better numbers (either around track or acceleration, depends on what ferrari sets it up to do)

@ddd: I don't hate any car. I love all sportscars. I love Lambo, but I don't hate Ferrari. So, I find a bit childish to say "A friend of mine...", because this cannot be proved, and cannot represent a real element in this discussion. I don't think is really intelligent to bring some arguments in this discussion. A friend of mine, with his UFO...
To have a reliable acceleration value, you cannot base your argumentation on personal (your, or of your friend) sensations. It's necessary to have professional instruments.
This doesn't mean I hate Ferrari...

that is understandable as it is a car sold at a dealer, but the cars they are talking about are not sold to people, they're tuned for the review (the 458 is still good)

@ddd and u are one of those typical ferrari fanboys.

You dont like Ferrari and in typical way use everything against it. 458 has very good opinion in tests (and much better from lucky owners) so u figure out a way to lower its value.

I dont need to prove anything to you...458 does not need a "protector" - it is one of the best car and nothing changes that.

It is not a problem to find a 458 user in a big city and chek the performance.

that is understandable as it is a car sold at a dealer, but the cars they are talking about are not sold to people, they're tuned for the review (the 458 is still good)

not all ferraris are tuned, the enzo used in top gear was owned by nick mason which means the car is as if it came out of the dealer

@ddd: "Everyone can write everything...imo it is bulls*it." Ehm... it's just what you're doing, too!