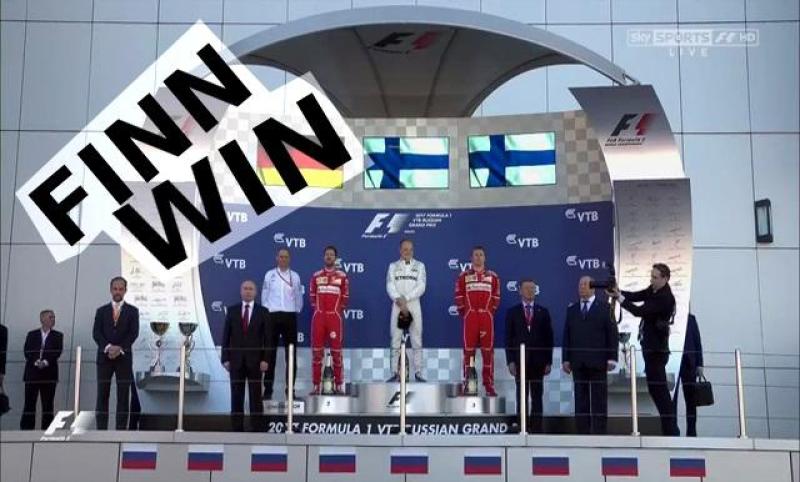 Ferrari did not get the winning spoils yesterday in Russian GP, but they did prove to have fastest car in the Formula 1 paddock.

Ferrari were faster in both qualifhing and race session, and, if it wasn't for the great start for Mercedes "number two" driver Valtteri Bottas, they would have scored a dominating "one-two" finish - something we were used to see only from Mercedes.

Valtteri Bottas scored his first Grand Prix victory and you would be a fool to think that it won't be followed by many more - Bottas is in great posotion to become the next Formula 1 superstar.

Fastest lap times for the Russian GP qualifhing were somewhat disappointing with just 2.5 second improvement over last year. This is to be expected in a street circuit like Sochi Autodrom. Expect more extreme lap times in the downforce-bound circuit of Barcelona Catalunya on May 14th.

A huge and surprised congrats to Stroll for his 3rd place at Azerbaijan!! Alonso gets 9th. To get 9th in that McLaren even with the high attrition in the race takes genius driving. A solid 5th for Hamilton.

Congrats on my fellow Canuck Stroll for the first GP points by a Canadian not named Villeneuve! Alonsos car dies 1.5 laps from solid points. #$%##!!! Honda Engine!!! he must have been thinking. Solid 8th place for Hulkenberg. Won't spoil it for ya FL but the Force India drivers might want a cage match against each other.

Finally,the only race of the year less than a 1000 km from me! And the same time zone too lol.

65th pole for Hamilton! Says Ayrton Sennas helmet-which he received today- is worth more than all he has won.

Wow Hamilton having qualifying problems in Monaco. Red Bull might get a podium...perhaps even 2nd

Congratulations Hamilton! Finland may have the most great F1 drivers per capita but Britain must have the most period. Graham Hill,Damon Hill,Jackie Stewart,Lewis Hamilton,Jensen Button,Nigel Mansell,Stirling Moss and David Coulthard just off the top of my head.Good show for Kyvat with his rough year. McLaren was like Lucy with the football to Alonsos Charlie Brown this weekend. The pundits say he may have a chance to join Renault to replace Palmer.
If there was an iron car award Force India would win it.

Did anyone else notice the aerobatics of that TV chopper? I am glad nobody died in a giant fireball that Sunday...

Seriously, why endanger people's lives when you can just have drones doing the filming. When battery runs out, you just fly another drone. It's not like pro cycling where they cover 160 km / day and chopper has to follow them all the way.

Traditionally Red Bull would be able to close the gap in Spain but now with those downforce issues....

I think Massa relished beating Verstappen in qualifying as they are not exactly buddies.

Bottas was performing like Raikkonen early in the year but maybe he's showing his true potential. Lewis is a great driver and had cooling issues. Vettel should have a good chance to win it all still.Red Bull has a very small chance of missing third if they don't improve reliability as clearly they are faster than Force India when they finish.Williams is also improved.

Hennessey Venom F5 Roadster or Bugatti Mistral Roadster or Koenigsegg CC850 which are you ...