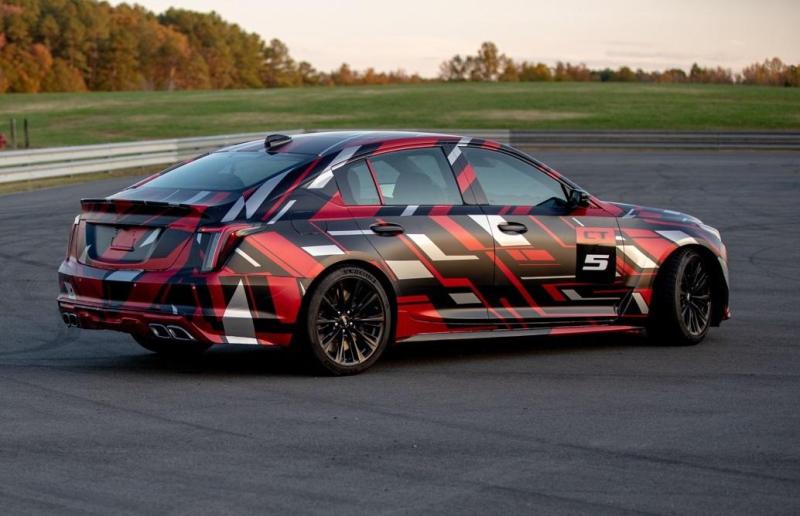 Here's HOW the Cadillac CT5-V Blackwing will be released.

First of all, the Cadillac CT5-V Blackwing will be targeting the all-wheel-drive BMW M3 Competition and upcoming hybridized Mercedes-AMG C 63 S. It will come with nasty amounts of power, but it will still be competing with those two in regards to price.

Most importantly, the CT5-V Blackwing is slightly smaller than the outgoing CTS-V, so it will (should) be lighter too. According to GM Authority, it will wear larger tires as well - 275's up front and 305's in the back.

In regards to four-door sedans, the CT5-V BW will be prioritizing laptime records over dragstrip quarter-mile times. There are REALLY ONLY TWO others like this car - the Alfa Romeo Giulia GTAm and the Jaguar XE SV Project 8. But they are limited-production, and the CT5-V BW will be a series-production model.

Also, when the CT5-V BW gets released, it is expected that the supercharged LT4 engine that is powering the car will get a power bump — MASSIVE for the Cadillac super-sedan, but a slight bit for the Chevy Camaro ZL1. It has remained at 650 hp since 2017 (CTS-V made 640 from 2016 to its last year of prodiction, 2019).

Despite the smaller size, Cadillac is still aiming (performance wise) after the BMW M5 Competition and Mercedes-AMG E 63 S (Germans are conservative with power ratings). Like they did with the 1st and 2nd gen "compact/midsize" CTS-V, and with the "mid/full-size" STS-V and CT6-V, their new CT4-V BW and CT5-V BW super-sedans will earn their "tweener" status.

Before the haters get mad, let's discuss the real reason why the 4.2TT Blackwing will NOT appear in any more cars than the now-discontinued CT6-V:

Cadillac has went full Greta. The Escalade-V is canceled.

The Cadillac CT-5V black-wing is CONFIRMED to use a supercharged 6.2L V8 from the corvette Z06 making 650 hp and a option for MANUAL TRANSMISSION

So... Cadillac are not that stupid after all:

Judging by that article they were going to cancel this awesome Euro style V8TT and only do SUVs/Crossovers/Electric etc.

bro the z06 and zr1 are likely to have the c8.R race car engine

The car SOUNDS promising so far B-)

Is it really going to focus on M4 and C63? The predecessor was definitely in the class of the M5 and E63. The also planned CT4-V Blackwing will fit the M4 and C63 much better in terms of power and size.

I'm really looking forward to these Cadillacs. The CTS-V was an amazing vehicle. It was so good that it actually won some German comparison tests against BMW, Audi, Mercedes and Porsche.

What I do hate though is Cadillacs name politics. At this point they just created a mess with V, V-Sport, V Blackwing, Blackwing engine... FFS choose something and then stick to it! Even as someone who likes Cadillac it gets confusing...

Yeah that's what confuses me as well. The CT6-V competes with the S class and BMW 7 series, the current CT4-V is compared to the BMW M235i and CLA 35, and the CT5-V is supposed to compete with the middle class segment? What about M5 and E63? Do they make a bigger engine to keep up in both segments? It's confusing.

The era of the 3rd gen CTS and the ATS is over. It's back to tweeners. The CT6 in terms of wheelbase and length and even weight at least is smaller than the 7 and larger than the 5.

Mag tests are comparing the CT4 to the CLA and 2GC, although its size is closer to the C and 3/4GC.

I remember the figures from this test were already added earlier, and after a ...

My choice would be datsun go+

"Base" Aston Martin Vantage 2018 0-300km/h after MUCH detailed work and benchmarking is calculated ...

the ultima rs has just as reasonable performance numbers, so why ...

Yeah, I had to check other magazines and they all say the same. Pretty ...

Pretty insane performance... I believe it has about 370-380 horsepower.