20 Thank you, Marc Marquez for ruining the 2015 MotoGP championship 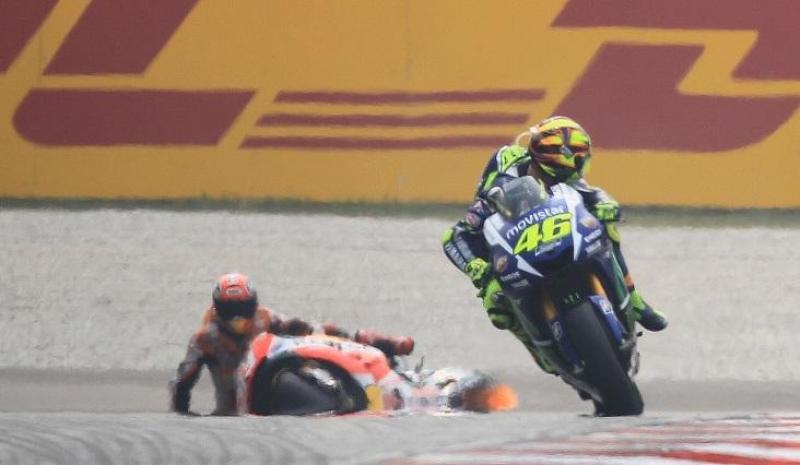 If you are a Marc Marquez fan, you should be ashamed of what your man did last time out in the Malaysian Grand Prix.

Perhaps referring to him as a "man" is giving him too much credit.

A grown man with grown man's judgement should be able to keep his personal antipathies under control and not let revengeful emotions interfere with racing and other riders championship hopes.

Professional racer is paid to win races, not deal with personal issues and wage wars on race track.

Countless risky overtakes and no urgency to break away from Rossi to chase after Lorenzo. A rider with nothing to loose putting at risk another rider with everything to lose - all just to "prove a point" and avenge a few spiteful comments at pre-race press conference. Is that behavior worthy of a grown man?

Perhaps Valentino Rossi's theory about Marquez supporting Lorenzo and being jealous of Rossi winning another title is true - it certainly looked that way on Sunday.

In the end, we all lose as MotoGP fans. Final race in Valencia will not be the "epic duel" we were hoping for, and motorcycle racing will not have a 10 time world champion, supported by millions of fans worldwide.

Marc deserves to be trolled hard... and bitch-slapped...

italian, your comment doesn't make sense, maybe you should have written it in Italian.

Rossi has stated to everyone, what actually happened, look closely at the vt. Rossi ran Marquez wide, slowed him down, then Marquez ran into Rossi and ended up pushing with his head onto Rossis bike . Rossi pushed him away with his knee and his foot came off the peg, We'd all do the same if some one pushed into us like this.

Both are shameful. Rossi comment out of track about Marc's help for Lorenzo is immature. If he was helping Lorenzo he'd give Lorenzo the win. Marc's revenge on Sepang is stupid and dangerous, he should've been penalized. Rossi's reaction, the way he deliberately slowed down to impede Marc's manuver is not something a "grown up" and "mature" rider would do. He deserves the penalty.

Amen to everything you wrote FL, i laughed my ass off.

Even if VR kicked MM on purpose and took a wide line to push him off trajectory, the instigator of all this was MM. He had no business messing up VR race, when so much was at stake for VR and nothing was at stake for him.

MM started this race with one objective - to fck up VR. Even at the start he didn't choose optimum line, he immediately went to cover Rossi.

The young pups don't like that the old dog is still the top dog.

I read on the news that Lorenzo, apparently, turned up to race direction meeting and insisted that Rossi should be disqualified.

Not to mention, he also left the podium during the ceremony and was cursing like mothafuka when he was asked to leave the top3 parking space after Rossi beat him in quali at last moment.

It's a Spanish mafia - Lorenzo and his minion Marc Marquez. I bet they will be having a wild party together after Lorenzo gets the title, with lots of booze and Spanish sluts lolol

I hope Ianone crashes out Lorenzo on purpose in the last race. That would be fair, wouldn't it?

Marques did everything to disrupt or even take Rossi's race. If you have had a chance to bond, I would give reason to fret it. Because then it does not hardened to over Lorenzo? It was clear his preference. #RossiWins

"I was just curious to save time, because I have genuine ...

"Modern cars don't have longer gears. If that was the case ...

I mean they sold all so Also the super capacitors aren't ...

Why do they limit top speed? I mean, they make every possible compromise to ...

It hits 300MPH theoretically with full factory power and no electronically ...

The McLaren Speedtail was factory manufactured with an electronically limited top ...

The BMW has more torque (I think), and it looks good too, but this ...