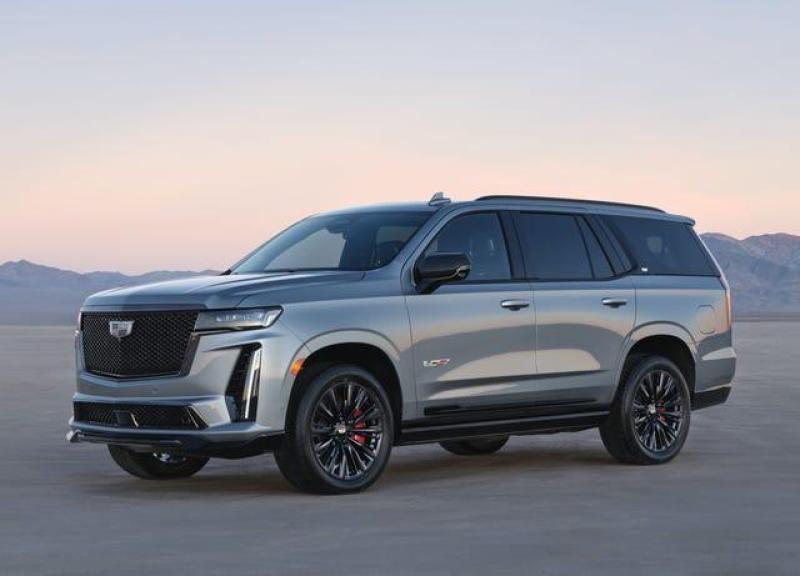 Today GM has released full specifications for the Cadillac Escalade's high performance version, the V-Series, which utilizes the heart of a Cadillac CT5-V Blackwing and Chevy Camaro ZL1 - 682 horsepower LT4 V8. Close, but no cigar to the Dodge Durango SRT Hellcat's 710 ponies!

Cadillac calls this "the most powerful full-size SUV." While Dodge refers to Durango Hellcat as a midsize SUV, length, wheelbase, width, height, frame and especially towing capacity all prove otherwise.

A Dodge Durango is bigger than a Range Rover and barely smaller than a BMW X7 or Mercedes-Benz GLS-Class. By the way, I would even consider today's Ford Explorer and Lincoln Aviator full-size. America may have a different way of measuring full-size SUVs, but in Europe, anything over 5m long and 3m+ in wheelbase is a full-size no matter what.

The Escalade-V, even with its SAE-certified 682 hp rating gets its rear end kicked by the BMW Alpina XB7 and Mercedes-AMG GLS63, both of which make more power and are lighter too.

The Germans rate power output at wheels for performance cars and at crank for some of their mainstream cars, and AWD accounts for approximately 80% drivetrain efficiency (even up to 90% in advanced systems like M xDrive and AMG 4MATIC+). Germany's performance AWD cars are even better than RWD cars (85%) and on par with FWD ones in terms of power efficiency.

Seeing that the Alpina SAV is rated at 621 PS and the Mercedes SUV at 612 PS (both DIN figures), those are equivalents to 690 PS for the Alpina and up to 680 PS for the Mercedes in SAE "speak". Even then, both trucks provide a flatter torque curve than the Cadillac.

Also, the Aston Martin DBX707, Bentley Bentayga Speed, and Lamborghini Urus are full-size SUVs as well, not really mid-size. They are more coupe-like, but, at the same time, bigger than an X6M and a GLE63 "coupe", as well as the Cayenne Turbo GT. British and Italian by heritage, but German by heart, all of these truly make over 700 PS.

The Aston and the Lambo are more powerful than the Durango Hellcat as well.

"The Germans rate power output at wheels for performance cars and at crank for some of their mainstream cars"; "Seeing that the Alpina SAV is rated at 621 PS and the Mercedes SUV at 612 PS (both DIN figures), those are equivalents to 690 PS for the Alpina and up to 680 PS for the Mercedes in SAE "speak"."

Sorry but that is just wrong. Both SAE-hp and also DIN-PS measure power at the flywheel today (has been since that after 1972 when SAE changed from gross-hp to net-hp). It doesn't matter if performance or normal commuter car. It also makes much more sense because otherwise you'd need different power-ratings for different transmissions and also for cars that are offered both with all-wheel-drive and also just rear/front-wheel drive.

The Dodge Durango and Ford Explorer are only considered "midsize" for marketing reasons and because Americans have bigger parking spaces than Europeans. The Chevy Traverse doesn't really make the cut in the segment however because it's an extended wheelbase variant of the GMC Acadia, which is a FWD, minivan-themed crossover and doesn't drive like an SUV.

GM approached things much differently with the Chevy Tahoe and GMC Yukon than Ford and Stellantis did with the Ford Expedition and Jeep Wagoneer. Even the Maserati Levante borders between midsize (length and weight) and full-size (wheelbase and equipment level), and that truck rivals the Lincoln Aviator.

Anyway, the Expedition and Wagoneer are not as mass-produced as the Tahoe. Ford and Stellantis wanted to make their trucks more exclusive and more luxurious by adding higher equipment trims (such as Platinum and Grand); well, Ford did that to cross-compete with its own Lincoln Navigator, which competes with some of those flagship German offerings plus the Lexus LX600/750h. The Jeep Grand Wagoneer is more of an Infiniti QX80 competitor with some old-school mentality attached to it.

The Yukon Denali is, these days, the most logical competitor to Ford and Jeep. The entry-level Tahoe (5.3L model) is basically a competitor, albeit indirectly, to the Explorer. The Escalade-V kind of mixes with Lincoln Aviator Grand Touring Black Label and Maserati Levante GTS (not Trofeo though, that one will beat it and even outprice it) in terms of overall performance and equipment level.

Hence why it's way more common to see both Tahoe and Explorer cop trucks where I live ;)

GM really only wanted to provide one quality RWD offering with a quantity amount of variants.

GM builds cars for the family. Ford and Stellantis build cars for the individual, the former with its fashion and economy factors, and the latter with its cool and fun factors.

At Nevada they'd completely FINISH the game with the current specificications ...

So that I can delete 4 copies and keep myself busy. 😀

You do realize you're killing polar bears en masse while driving this thing.. 9 ...