54 The new Ford GT has arrived 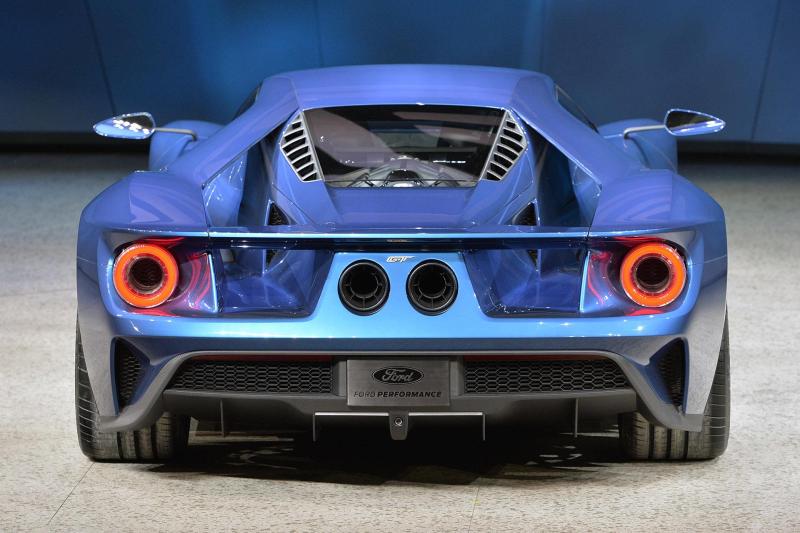 The second generation GT is here and it is not the car you expected. Striking new design makes a further departure from the original Ford GT40 while still retaining some of the classic features like the shape of the optics or the overall proportions.

Like GT40 and 2005 Ford GT, the new GT is a very wide car with a low roofline. It appears to be a lot bigger than most of it's likely rivals - McLaren 650S, Lamborghini Huracan or Ferrari 458. Perhaps it's most striking design feature are the gigantic air scoops which morph into racecar-like air channels and vent the air underneath the rear wing. It all looks very downforce-centric but it is yet to be seen if these features function as good as they look.

The most surprising, progressive and, for some, disappointing feature is the engine. Ford will not be using a V8 in the new GT. Instead, they will utilize a very high output twin turbo V6. This engine will carry the Ecoboost brand as Fords most powerful forced induction engine. Ford promises more than 600 horsepower for the production GT.

The three letter combination "eco" in the Ecoboost brand may seem like an oddity when it comes to supercar powertrain. However, with the introduction of hybrid hypercars like McLaren P1, Ferrari LaFerrari and Porsche 918 in particular, fuel economy became fashionable even for supercar buyers.

It looks like Ford did not want look old fashioned like they would had they stuck with the a great big V8. While electric hybrid powertrain would most likely inflate the production cost beyond Fords target, turbo V6 with a brand name that includes the word "eco" was the perfect compromise for having relatively cheap, conventional technology as well as perceived sophistication and "progressiveness".

If Ford was to redesign the new GT all over again and do it in the current economic climate of crashing oil price and cheap fuel, who knows, maybe they would have gone for a V8 with the good old gas-guzzling supercharged strapped on top of it.

I am OK with V6 supercars. This will certainly not be the first or last. I just hope there are a lot of horses hiding beneath that plus sign next to the "600 hp" in Fords press release. Ideally I would like to see a power figure closer to 650, as soon all of the mid-engine competition will be in the 600 to 700 horsepower range.

I don't trust any manufactures 0-60 times as they all seem quite different in testing I've seen. What's the GTRs 0-60 without launch control? I have seen videos with the Dodge Callenger with claimed times of 3.4 to 3.6 and seen actual footage with best times of 4.3 to 4.5 and then I even phoned AMS tuning and asked why I only get a 0.3 second improvement time on a GTR 0-60 for like $20,000 and he seemed to get upset and said we don't care about the 0-60 times? Really? For 20k? What's the truth.

Lets ask Fastest Laps for for a tuner only site? Who gets the deciding vote?

Because theres no need for it, Along with tradition and weight, Why should they?

Why will some supercars manufacturers not use AWD as it is proven to dynamically change a cars performance , GTR, lambo, even Porshe, but Ferrari , Mclaren won't ?

I think it should. For some reason the NSx gets way more respect than the Gtr , nismo or not, and although I do not personally see better performance than the Gtr, it seems you will be paying for looks more than anything. If looks cost money the FordGt should cost more than the NSx . Pure power like the Gtr and Gt don't need panzi electric motors either.281

they wont come close to it in any category, And even if they were to beat a Nismo or to lose to it, It wouldnt effect sale.

Well if they can come close to the time of say the 918 Spyder , then were talking, but if they can't beat the Gtr nismo then a lot of people will be disappointed

So theyll be a bust if they dont put down a good time at the ring? lol Just the names returning are enuff to make bank, NSX, Ford GT, 2 iconic cars returning in todays for, Thats enuff right there, They will both sell like.....Something that sells fast-_-

Ive still got my certain dislikes about both cars when it comes to them, But nontheless they will be fantastic cars guaranteed.

Well we can't say which will be the biggest bust till they put their lap times in at the ring, NSx or GT

I completely agree, All the engineering that goes into it, All the expensive materials, The time, Im certainly not gonna say its not worth it, It just seems a bit much considering what it is.

The Nsx is going to be 150k Usd+, Some sources say as high as 250k Usd, But i dont think it will be THAT expensive, But then again Nsxs have never been cheap, Specially for the amount of power they are puttuing in.

I personally love the styling. The TT-V6 is kinda disappointing(should be an updated supercharged-V8), but I think the $400k price tag is just wayy too high... Think of it, the brand new Acura NSX is said to start around $130k, and I doubt this new GT will be much faster...

@BR2+ For the most part I agree with you. And thats hard for me to do because the 05 Ford GT is my all time favorite supercar. Even if I was a billionaire there is no way i would buy a 400 thousand dollar supercar with a V6 engine, I dont care how much HP it have. I'd much rather have a McLaren 650s or 675LT.

Yeah i think thats a bad move on there part, They will sell all of them no problem, But at 400k Usd seems a bit much, I mean one of the greatest things of the last GT was its amazing price, 30k less then a 360, 999 units being built is fine, I always thought the 4000 GTs of last was way too high, This must just have an LFA impact where people complain about the price. And it being an American SuperCar its price should be so blistered, Just imagine how much it will cost because of import bs taxes over here. I personally think its a bad move on Fords part specially since Ford is an affordable brand no matte where it is. And at that price, It better be pushing more then 700Bhp, Maybe even 8.

I don't know the Gtr has a TT V6 and has nothing to prove and that engine setup tuned will beat any supercar on the planet, this Gt is awesome and Ford knows their stuff, they have nothing to prove like the NSx does.

Don't get me wrong, I love a V6 engine, they provide good power and fuel economy, but I still think that they have no place under the hood of a supercar.

again that's why i say the engine is a disappointment.

It is difficult, I mean were talking just under 30 years ...

Aston Martin on the Nurburgring~ I guess!