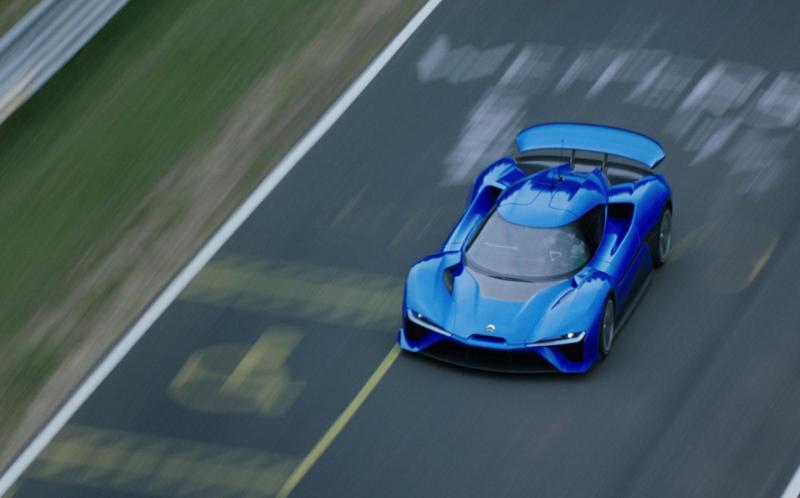 Yesterday a new electric car brand launched - "Nio" from NextEV comapny. NextEV is a China-based electric car startup which competes in Formula E. Nio is their new supercar brand, and Nio EP9 is their first product with some grandiose performance claims.

The most grandiose is 7 minute and 5 second Nürburgring lap time - fastest ever for electric cars and just 8 seconds off the de-facto fastest combustion car laptime - 6:57 by Porsche 918.

What overshadows this otherwise spectacular release is lack of un-edited onboard footage. Nor do I know if, where and when I can buy the EP9 as a road car in my country or any country - none of the photos I have seen are with numberplates.

20.6 kilometer Nürburgring Nordschleife is especially challenging for electric cars and hybrids because it is so long and demands high capacity and well cooled battery systems.

But battery technology has steadily improved every year and electric race cars are already winning in 20 kilometer Pikes Peak hillclimb.

...You cant see a damned thing in that video other then the road, No data in there whatsoever, All you can see is the outline of the car, Like you might as well watch the vid with your eyes closes, Its pretty much the same thing, And my god that damned sound, Sounds like a tea kettle every time he steps on the gas, So damned annoying.

240 kg of downforce would probably crush that cheap piece of plastic lmao.

Neo is needed back at the Matrix to race that Ducati. Unsubstantiated claims are meat and drink to small manufacturers to attract publicity

LOL no speedometer, not even a view of the steering wheel. As onboard laps go, this is a pretty bleak one.

The full onboard footage just got released: https://www.youtube.com/watch?v=UuW9qYVBLB8

I heard that those cars are not a production model nor it will made to production line someday. Those are solely built for marketing purpose and to be given to a few number of their investors.

Im surprised other countrys even try to have a TopGear, They all go bust eventually, But im surprised how well the US one is doing, Even though its Crap IMO.

In North Korea, they would have shown the same clip and claimed that Kim Jong Un took down a US jet by throwing a spear at it.

That's something you would expect from North Koreans, not Chinese :D

We all remember when Chinese news showed a clip from Top Gun and claimed it was a new air-to-air missile test.:D

Meh just keep it for now, Given the impact this may have on the motoring world, The real truth will come out in no time, So its pretty much just a waiting game.

Its like oldschool turbo racing cars where different boost values were used for qualifying, race and practice. "80%" doesn't mean anything, since "100% power" is arbitrary point of reference and may be exaggerated and unsustainable for anything more than short bursts of acceleration.

As far as I understand there are three problems first of which can be considered as solved in 2016:

1.) Battery capacity (probably well enough to last 20 km at racing speed)
2.) Battery and power electronics cooling (big problem and requiring big solutions - look at those huge air intakes)
3.) Power electronics throughput - how much power can they deliver from batteries to motors. Motors and batteries are never the bottleneck, its always electronics

It was set at 80% power to prevent overheating. I'm sure the engineers weren't stupid. Setting 100% power would probably lead it to limp in the end and ultimately be slower. It's kinda cheesy for them to try to "fool" people to think that it could have gone a lot faster...

But the Paul Ricard lap was quite impressive. Faster than a GT3 car

Also the Nurb time was done with 90% power output to prevent overheating and the result must have been afftected by the long final straight, since the Ep9 is automatically limited to 313 km/h.
For the rest, given the huge insta-torque (more so than power) and the insane levels of mechanical and aero grip (torque vectoring + basically an unheard of level of downforce), this car surely must be mindblowing on acceleration and turning speed, and the Paul Ricard lap time just confirms this: indeed, there would be no way for an IC engine vehicle to post a 1:52 while weighting more than 1700 kg, slicks or not. Not even close.

The lap at Paul Ricard was done with slicks, still it is amazing since the time is 13 seconds lower than P1 GTR resistered 2:05 and almost in 2015 LMP2 tests realm.

It is almost certain that these laps will have to be deleted because I don't think the car was certified road legal at the point that it was track tested. So it is technically a "prototype" or "test mule".

Not happy. But lets let them stay for now. I may try to contact NextEV and ask about road legality.

RWD That thing is dangerous