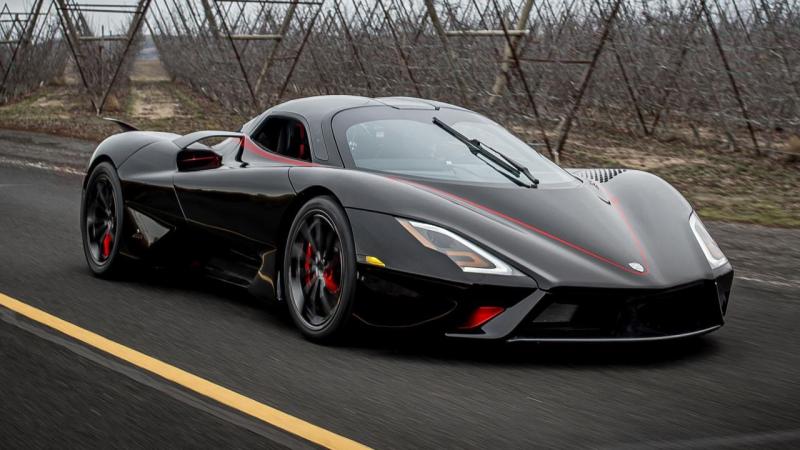 SSC is still doing some testing on the Tuatara before the inevitable record run and they published an unlisted video on youtube of an acceleration run:

TopGear interview wtih SSC boss Jerod Shelby revealed some preliminary results from analyzing telemetry after the car did some 90 per cent throttle pulls in second and third gear.

I got a call from a very excited tuner later that night, while I was eating dinner with my family, saying: "do you realize that you’re going from 60mph to 120mph in 2.5 seconds flat in a couple of these pulls?"

Shelby said his tuner reminded him that "heavily modified, 2500 - 3000 horsepower AWD race vehicles" run those kinds of times. The Tuatara, of course, is a rear-drive hypercar designed to be driven every day.

Sometimes we need to step outside the Fastestlaps community and spread our wings in other area's and directions. Many I know do. Just saying.

O.G.'s know I've done a little with the Zeperfs community on certain projects over the past while. Mainly production hypercar related.

Well I'm moving in other new area's on TOP of the SECRET projects LOL!

Quote>"The SSC Tuatara has proved that it is capable of reaching insane speeds. Hitting 295 mph in 2.3 miles is no mean feat. The mighty engine powering the Tuatara was recently tested on a dyno, and you’ll be amazed to see the result.

SSC North America is gunning for the crown of the world’s fastest production car. For that, the Tuatara will have to break the 300 mph barrier. At the moment, the record is held by the Bugatti Chiron Super Sport 300+, which has set the bar at 305 mph.

The Tuatara is also going up against the Hennessey Venom F5. The hypercar achieved a top speed of 272 mph during initial testing. However, the Texas-based tuner estimates that the Venom F5 can reach 311 mph.

Got to represent right?🙂

I'm not sure how many people it'll reach but it'll be alot more than before, right?

SSC North America has an amazing project. One of my current favourites if not absolute outright. I remember being exactly like this about the Mclaren F1. No wrong or right, just is what it is, incredibly impressive engineering.

I'll find the information eventually. Apparently I'm one of the very few that "care". It's got nothing to do with that. I just obsess a little on details on certain projects. As it turns out that's a good thing! For obvious reasons.

This goes with already released information about front and rear aluminium crash structures plus the footage of computer SIMULATIONS of crash testing on their other Social feeds and channels, you can find it all easily enough.

Seemingly, they ARE doing it IMPRESSIVELY in terms of engineering! The OEM'S are first class, there's no discussion there whatsoever, none. This is a huge find and it ELEVATES the entire project to a new dimension. That's why I Love the car, there's always something else to discuss or discover!

Based off, where possible factory manufacturer *claimed acceleration figures and metrics and in comparison to Kennedy Space Centre 0-295MPH these are the findings based on that hypotheses~

And PLEASE don't anyone bother telling me it WASN'T an all out traction and launch controlled start, I KNOW. It's me that tells you that, LOL! ;)

As a guide 0-400km/h would be 20.401 seconds based on this "correction". This is ABSOLUTELY possible. She's 3 seconds quicker 300-400km/h than the Koenigsegg Agera RS so 24-3 makes 21 seconds in benchmarked verified comparison anyway? If they get the technical specifications and details right, she could go under 20 seconds. I've always said that!

You think you know what she's capable of? I'm TELLING you, you DON'T! They DON'T yet! LOL!

Quote>"While they also implemented better venting for the crankcase, Shelby told Motor Authority the single largest change to the Tuatara was the implementation of ten lab-quality oxygen sensors. The Tuatara now features one O2 sensor per cylinder plus two primary sensors rather than just two primary sensors. The team had to recalibrate the engine due to the new O2 sensor readings, which changed the motor’s timing and air-fuel ratio. The result was slightly more power. The Tuatara made 1,350 hp on 91-octane pump gas and as much as 1,750 hp on E85. It now makes a little over 1,861 hp and 1,522 lb-ft of torque on methanol and E85, but the team hasn’t dynoed the updated powertrain on pump gas. The Tuatara ran methanol on May 14."

Motorauthority are the PREMIER go to site for technical details and specifications related to SSC North America bar NONE. This information comes from them?

There's NO way that SSC North America has NOT issued those numbers?

Anyway as long as ALL production cars are fitted with these capabilities right out the factory I don't care at all. Jerod Shelby has atleast stated this.

Very privately I asked someone to run calculations on the car as the torque was originally 1280 lbs/ft and somehow went to 1322 lbs/ft. The hp figure also went up accordingly I can't remember the precise number but it's somewhere. The affects were dramatic!

Anyway I feel they've between them, breached 1900hp possibly! ;)

Been following since God knows when as she's living up to her name. Genetic revolution like no other.

Obviously we await such an attempt. PLUS verifications. She can do it, look below I've always known it.

SSC Tuatara DID do circa 242MPH in 1/2 mile. Because it was from a ROLL. Eminently achievable. Around 50MPH then it was go time!

In the Stradman roll racing video. Other very interesting information has been gleaned!

To be honest I've gone way ****ing deeper. This last year she's had AS much attention as the SS, maybe more!

I AGAIN appreciate they ****ed up in Nevada. That doesn't affect my admiration for the project.

In fact it's had the REVERSE effect!

Nobody has anything radically more sophisticated than anybody in suspension or traction control or launch control capabilities?

Yet that is. The new Koenigsegg Jesko "Light Speed Transmission" is interesting.

But back to my point, if she can be quicker than both those times what does this reveal? Well a low 11 seconds 0-300km/h is absolutely possible.

You should all know by now her 300-400km/h time verified at the Kennedy Space Centre by Racelogic. 10 seconds.

400km/h and beyond her acceleration is breathtaking. And there are a myriad of reasons for this BEYOND just power. Which I'm definitely NOT listing.

It shouldn't have been. Because on some levels, it was already clear to see, she's a dominator~ reference fire power and dog fighting capabilities, Aerospace, where some of her OEM is done.

We need to take a very SERIOUSLY close look at these metrics. I've already seen some startling and verified information and metrics! Guess all those many months away looking at everything else will pay huge dividends in return particularly benchmarking and cross referencing.

I think the acceleration of this car is actually harming and damaging for normal people :D

Wow! Quite impressive! I am very interested in this all-american hypercar!
Reminds me of the good old days, then americans tried to compete with euro sportcars of the day with their Vector.

SSC is planning a cheaper/lower performance model than the Tuatara

Why so this much hype about this car?

This company reminds me of Vector. An American hypercar company, trying to compete with the big boys. Let’s just hope they don’t go the way of Vector.

It's been over 100 years....can't someone invent a better way to wipe a windshield?

You should see the idiots new YouTube site. It's wank? Ofcourse ...

I think so too. Especially when the battery is slowly depleting.

I also never said it would outright beat them but "give them a good ...

Reply: I'm sure on some good tire it will give the holy trinity a ...

Still one more than you 😝

Italian cars have one purpose in life