28 The "TopGear" hybrid hypercar hypertest will happen after all 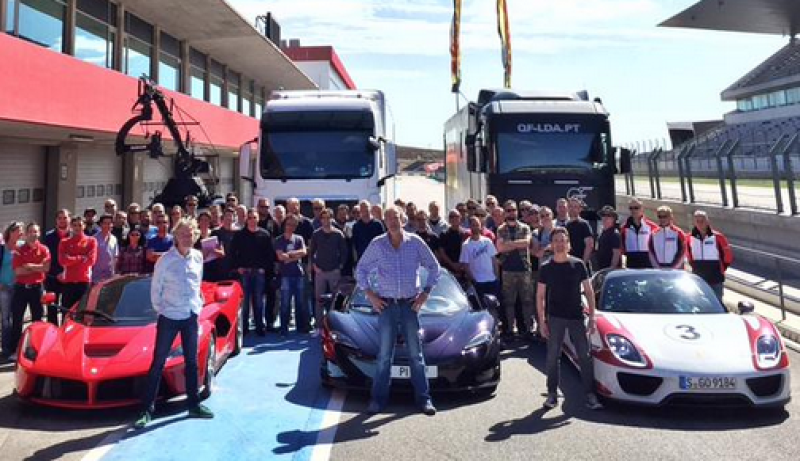 Jeremy Clarkson, Richard Hammond and James May will soon debut their brand new automotive program on Amazon Prime, and it looks like this "new era of Clarkson, Hammond and May" will kick off with something big.

That "something big" is what we waited for since the last season of BBC TopGear - a side-by-side comparison test of all three hybrid hypercars - Ferrari LaFerrari, McLaren P1 and Porsche 918 Spyder.

As far as I know, such test is not yet confirmed and we don't know whether it will include instrumented testing such as laptimes (God, please!), but the source of this news is a twitter post by Jeremy Clarkson (the photo above) which clearly shows all three cars on a racetrack.

What's more interesting is the presence of large number of people, some of which wear clothing in Ferrari and Porsche factory colors. This implies cooperation by manufacturers, who may have finally overcome their fear of objective comparison and, hopefully, no longer threaten their clients.

Yes, that has to be added to the "latest times" box in home page. As a checkbox or radiobox that would either switch to non-verified or include non-verified tests.

@fastestlaps: I think there should be a link to "not enough verified" times if you change the filter or something, because now they can only be find in the sidebar and the are getting pushed further and further down.

So why doesn't the site allow these times to be added?

Laferrari did pretty well on such a short track. I was almost sure that P1 and 918 were much faster than LF. But they are not. Nice to see that.

My only disappointment is that they won't be on BBC.

more over, this "track" is just 2 straights with 2 u-turns and a bit of a bend.

Let me explain it to you

In the video we see the driver fight the cars through the corners and doing a lot of mid-corner adjustment to the wheel, let's say he loses 0,05 seconds a corner on these inputs and you eventually end up with 0,X seconds added on by just driver error

Even a small driver error could've caused that 0,2 second difference, driver errors become a big factor on such a short lap

to partially answer to a question i have posed. P1 was on trofeos R, according to the uploader of the video, that explains a great deal of integrity of the promoters of the test.

anybody really believes these top gear guys have ever done a car test that could not be dismissed as scientifically plain garbage? they are just entertainers for broadly illiterate crowds.

i have checked the video of the Bailey's cars comparison. The driver consistently short changes the gears in laferrari: switched into 3rd at less than 60mph while turning before the opposite straight. in the last turn, grossly shortchange even the 4th at 115mph after having messed the last hairpin up. the lines in laferrari though seem ok, much better then other bogus tests of ferraris by other magazines (e.g. f12 by motortrend). what are the fitted tyres ? they say stock tyres in the ending infos, but in the previous preview p1 was wearing slick tires... useless configuration of silverstone circuit.

Well the P1 just beat the LaFerrari and 918 at Silverstone National but stupid site keeps saying duplicate entry when I try add it, so here are the facts.

Simple. I like all of them. I just don't like Ferrari and Mclarens attitude. The engineering, keep it coming

Im still not sure which one is my fav of the 3, They all have there good points, The P1 looks the most agressive, And has that big troll smile on it which i love, The 918 definitely has the best shape and interior, The La has the best rear and engine definetly, The sound of the 3 is just meh to me, Nice but a GT350 sounds better, But id rather have a S7 TwinTurbo or Zonda F Clubsport over any of them.

Yes, It had the W package on it

was that porsche the W-package? Given the nature of how bendy and fast silverstone is, I would have thought the P1 would do much better, especially with trofeo tires. Their are more bends than straights on this track, and the high speed bends should favor higher downforce as well.

The P1 was on Pirelli Trofeo R tyres

I think we're lost on what xenophobe actually means. Xenophobia- prejudice against people of ...

thanks for proving my point mr chironss man lol

The GT and Turbo cars are actually more comparable to the Viper. The reason ...

Maybe 996 Carrera on track So far Redeye is almost 6 seconds slower than ...

Aren't you that xenophobe JDM fanboy that disses on Nissan + Toyota + Subaru ...

Your arguments will get you nowhere, hellboat is hellboat, whether it's a Dodge or ...

I don't think the original Hellcat is faster than the current ...

Too much nonsense coming from you and your Hellcat being superior to the competition, ...