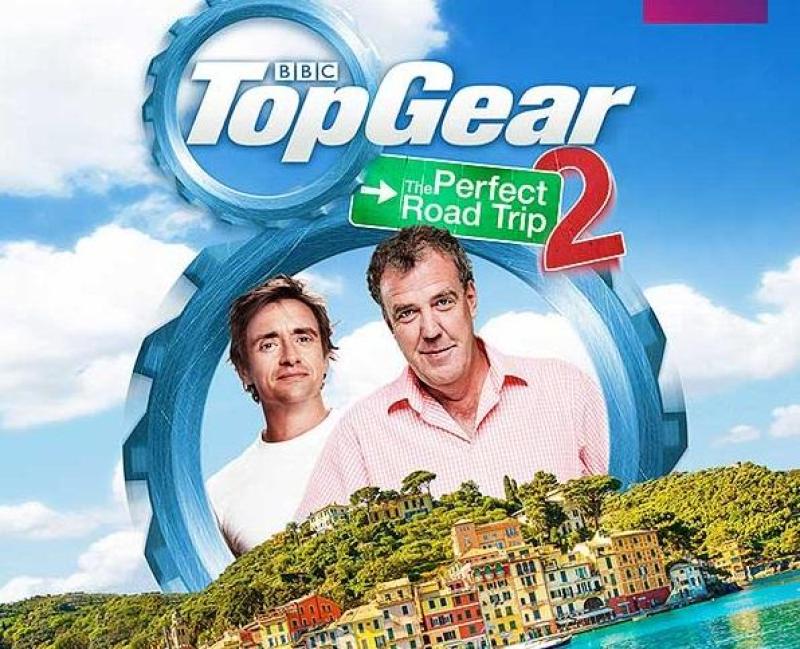 It has been a very long time since I last saw Clarkson, Hammond or May on TV. Despite the show becoming a little repetitive season after season, I still miss it during the inter-season breaks, especially now, when the break seems longer than ever.

The physical DVD release date is November 17th. I am not sure if this movie is available for purchase on digital distribution platforms, but torrent-sphere already has a torrent of this DVD floating around, both in full HD and down-sampled formats.

The second "best roadtrip" is much like the first, and you can get a good taste of what to expect from it by watching the trailer.

The highlight for me was Richard Hammond's unintended crash of Jaguar F-Type coupe at the Mugello circuit. So many times we have seen them three crashing cars on purpose, it's definitely refreshing to see a true accident.

And Richard Hammond's reaction - "why does this always happen to me?" was warranted and pretty funny too.

Yet another Volkswagen crossover, the Nivus  4

The producer is a peach for stopping the whole program. If he has a problem with clarkson punching him, just punch him back or sue him. Don't stop the program.

They should bring Chris Harris on Top Gear and make it 4 presenters.

That is stupid, You cant have Top Gear with out the 3 hosts, Even if JC is a fool, TG is TG WITH the 3, Thas like having Hot Cocoa with out the Cocoa..

I didnt see a problems with any of his terms, Hell nobody even new the term Slant was even a derogatory term before some uknown women sued them, For which reasons i dont even no considering she had nothing to do with it, And the N word? Thats a horrid word but i never even herd him say that, Only PART of that Mexican bid was off taste, But only by RH remark, Not by JCs, I think suspension is outright not called for, And would garner a huge loss in BBC2 ratings. TG ISNT TG without those 3...Period.

TopGear wouldn't die even if JC left. I think @harrismonkey would be a good replacement. I want TG to be more geeky, less mnstream comedy
Reply 41

Piratebay all the way, baby!

Use StreetFire . Net, They have practically all TG episodes and specials, You dont have to wait n download you can just stream, Its also in segments too, Thats the best source i no of.

Anyone else on here on the US relied on FinalGear to download the latest Top Gear episodes?... it's a shame that site went down :/.. Now how am I supposed to watch?

True it's not a big deal, I certainly don't care if there alcohol in the car, It's when it effects you that starts the problem, plus he didn't say he was drinking, I really hate when people or the press make a big deal out if nothing, just like his slope n n word fiasco, which us absolutely hilarious

Wouldn't be surprised if he was trolling the press :D Comon, spot this, make a big deal out of it, comooon! :D

Was Mr Clarkson, Had a pint of that Ole Grizzly in his auto.

Who (Clarkson or Hammond) and open container of what?

Supposedly he's in trouble again for having n open container in his car n people are making a huge deal out of it....smh

This episode was good. They looked like they were having fun and they seemed to enjoy the more relaxed format of a DVD special rather than usual studio setting.

I loved the part where Clarkson said "I though't we were free from that sort of thing" when they got their "Top Gear challenge envelope" from a man in anorak.

Im excited about TG, But the show isnt what it used to be, To be honest, Id rather they just skip the car reviews and just do these specials, Maybe with a more "Realty" type twist to it, Production values are better, But its missing something that it had before.

A shakedown / money grab. From alleged incident that happened years ago. I don't ...

Wtf they're seeking compensation from Audi lol they need to suck it up and ...

Why there's a picture of a Diablo? :-D

Any of these cars American built? Maybe the arrow?

Cheating engine :) Just look at Alfa and Haas Is it okay to say ...