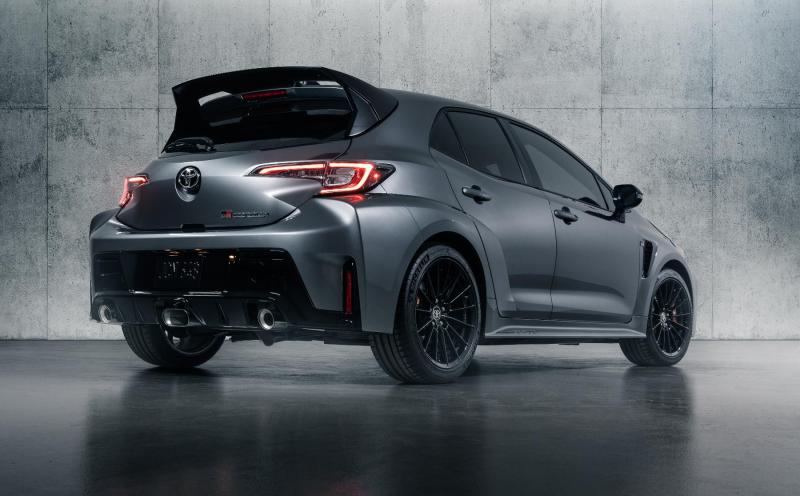 The GR Corolla, in simple terms, is latest generation Corolla with GR Yaris engine and 4 wheel drive system. As you would expect from a larger and more expensive car, GR Corolla offers more power and more features.

Power output is increased from 272 to 304 metric horsepower (precisely 300 "American" horsepower) but this has been achieved without increasing bore or stroke. 4 wheel drive system now offers more granular driving modes, as well as other improvements and adaptations for the Corolla chassis.

Toyota Corolla is in same segment as VW Golf and Honda Civic, therefore it will directly compete with acclaimed performance hatch backs like Golf GTI, Golf R and Honda Civic Type R. Sticking with 3 cylinder engine might mean that Civic Type R will be slightly out of reach in terms of ultimate performance in dry conditions.

On the other hand, it will be great news for existing GR Yaris owners, as they will be able to apply some of these OEM improvements to their cars - including full 304 PS engine upgrade. This also validates the strength and longevity of Toyota's 1.6 liter 3 cylinder engine - something that was debated as soon as the GR Yaris was released.

The issue of reliability has been discussed because of the very high output for an engine of this size. However, there are already several tuning houses in Japan which offer ~300 horsepower upgrade kit and, as far as I know, none have reported high failure rates.

Small 3 cylinder engine with big power and torque is what makes GR Yaris so magical and unique. In a larger and heavier Corolla this magic may not be as "magical". The question of reliability and hitting performance limits will return. Heavier car puts more stress on engine and increased stock power output in Corolla trim will further reduce whatever aftermarket gains there might still be in this 3 cylinder engine.

Putting outright performance and aftermarket potential aside, there is no denying that GR Corolla will be much more practical car. Which one to choose will depend on price and intended use.

but in my opinion this thing is beautiful

my cousin said he's going to buy this car, but first he wants to give it about 6 months after it comes out to see I they have any problems.

Soon Toyota will have more performance cars than BMW lol

So this is the best car in the world now?

This may be the first car ever for which I shall forgive the gimmicky triple exhaust tip setup. Because it signifies its 3 boosted cylinders.

It has 3 cylinders and 300 horses. Each cylinder is 533cc and generates 100 PS. That is really impressive for semi-heavy duty automotive engine. That is a lot for any kind of single cylinder engine.

For comparison - a high strung 450cc single in motocross bike will need frequent rebuilding, has no turbo and produces ~55 - 60 hp. Upscale it to 533cc and its still not close to 100 PS. Of course, I am comparing turbo to non-turbo, but wear is wear. Perhaps this proves that turbo cars with lower rpm are generally better for engine wear than non-turbo cars with less torque (less force on the crank) but high RPM. The RPM seems to be the bigger killer.

Also there's already a page for the gr corolla

The hp increase is due to new exhausts allowing foruch better airflow. I assume there's more too

The reality of currently buying a Chevrolet Corvette Z06! This guy ...

Which troll? I deleted some altimgamr posts earlier.

How did that guy without an account delete his messages? Can ...

Please don't tell anyone besides us three, but I found that irresistible! 😋 ...