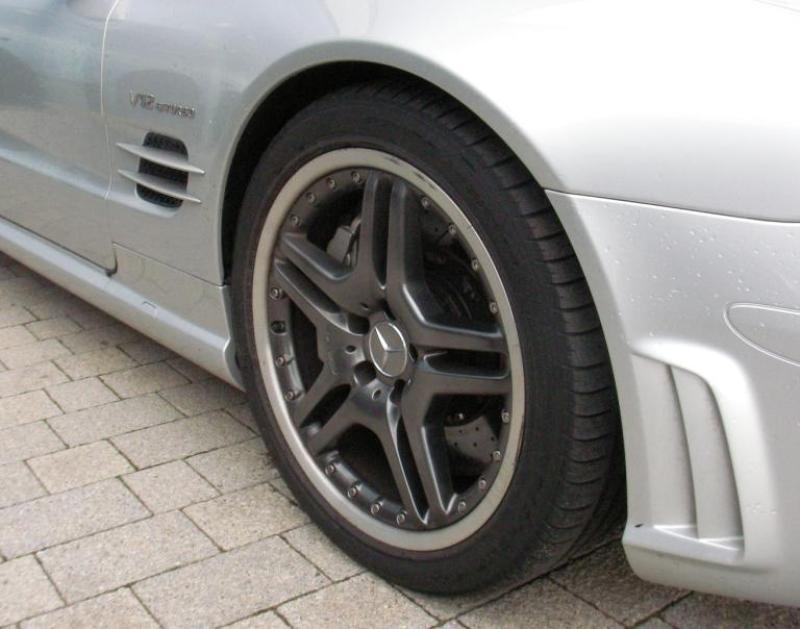 I recently had the chance to drive two great AMGs at the Mercedes-Benz World test facility based at the historic Brooklands track in the UK.

I've liked the SL since the introduction of the hardtop convertible back in 2003. Over the last few years I've had a chance to drive the SL500 and SL55 AMG a few times on normal roads so when the chance to drive two of the most powerful AMGs on track came up, I jumped at the opportunity!

First up was the SL65 AMG with its stupidly powerful 6 litre V12 Bi Turbo pushing out 612BHP (the most powerful car I've driven by a long way) and an amazing 738ftlb of torque! Looks wise the SL65 is much the same as the less powerful V8 engined SL55 apart from some subtle "V12 BiTurbo" badges on the front wings. Overall I still think the pre-facelift R230 shaped SLs are the best looking cars Mercedes have ever produced. I'd be quite happy having the V12 sitting in my driveway especially with the dark twin spoke alloys fitted to the test car. 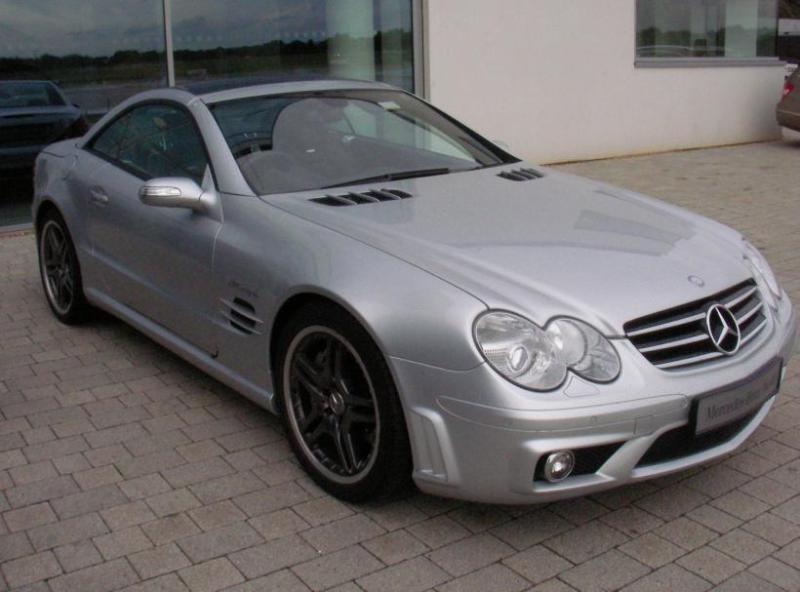 The beast was there but AMG seem to have it under fairly tight control.

I won't bore you with much detail about the interior of either car other than saying they (and all other AMGs I've sat in) were both very well put together and offer the driver and passenger a comfortable and luxurious place to sit.

Starting up the SL65 with a push of the gearshift mounted starter button greets you with a deep burble from the exhaust. Those 612 horses under the bonnet remained relatively quiet while we slowly drove out onto the first test track. Said track was a simple long strip designed to demonstrate the handling and brakes. With the Merc ABC adaptive dampers turned on, the two ton car handled a 40mph slalom with only a little body roll. When turned off, the roll increased but not by a huge amount - not bad for such a heavy car but not as good as the slightly more nimble SL55.

After the slalom came a traditional brake avoidance test where we drove at a steady 55mph towards a set of cones and at the last minute emergency brake and steer around the obstacle.

The 65 did a good job of stopping while turning but it didn't strike me as being much better than average. Next up was braking in the wet to simulate black ice conditions. Again the electronic gizmos did their stuff very well keeping the car pointing in the right direction. 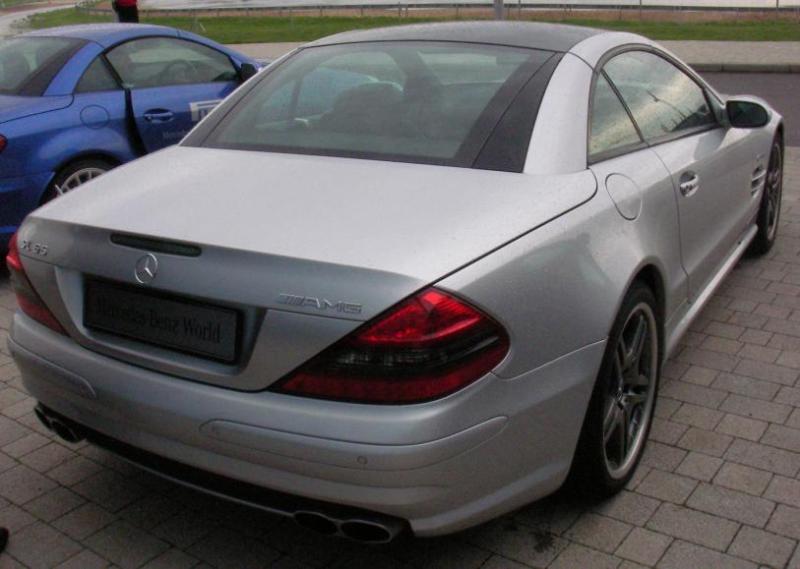 Now for the fun stuff - onto the handling track. After a gentle familiarisation lap I was encouraged to gradually pick up the pace. At comfortable speeds the 65 handles extremely well for its size and bulk while the auto box changes up and down when you expect it too (most of the time anyway).

In some of the tighter fast turns body roll does appear but nothing too upsetting, while pressing on the engine builds revs steadily with an increasingly loud rumble/growl from the exhaust, but I have to admit I was a bit disappointed not to be totally deafened when nearing the redline.

The beast was there but AMG seem to have it under fairly tight control. When driving as fast as I dared, understeer also starts to show itself at the entry to certain corners while fairly sudden power oversteer pushes the rear wide at the exit (apparently this is due to the second turbo spooling up).

Being such a long wheelbase car these tail happy characteristics were easy to control before the stability and traction control nannies had to step in and help.

As this track was mainly a long string of corners with only a single short straight the true potential of the SL65 was probably not shown off at its best. However, that short straight did allow us to hit 120mph in a ridiculously short time.

The final part of the SL65 drive was a circular skid pan where the aim is to keep the car in a carefully controlled slide. The instructor took over at this point to show me how its supposed to be done and immediately span the car much to his embarrassment!

To start the car drifting requires a quick application of power, then steering lock to catch the slide and then gentle changes in throttle and steering angle to keep on track - easier said than done! The first few attempts to start the drift ended up spinning the car. Having so much torque made controlling the 65 very difficult, especially as the optimum speed in 2nd gear was at the same point as the turbo kicks in.

It was nearly impossible to keep a drift going for very long - the best I managed was half a lap. 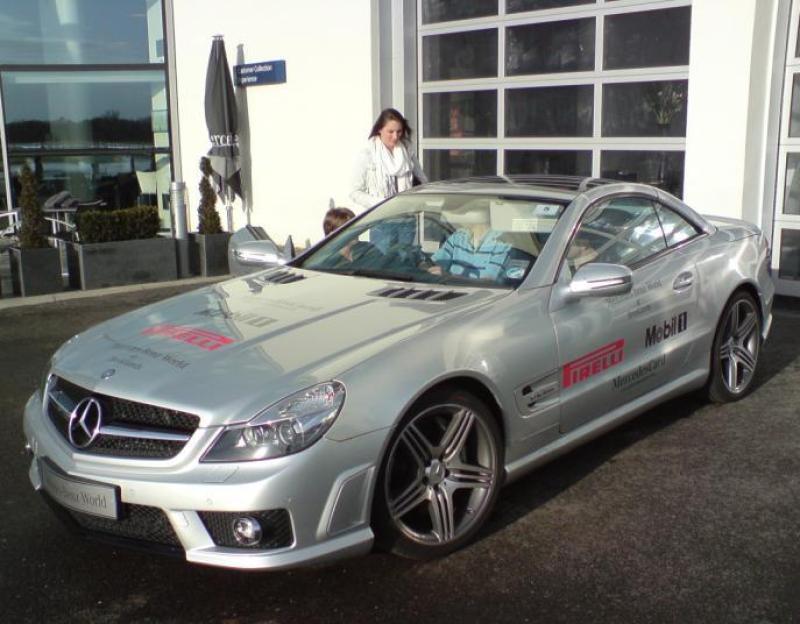 To be honest, I think they've ruined the looks of the old car by trying to make it more manly and angular. If it ain't broke, don't fix it!

Now for the new facelift SL63 AMG. To be honest, I think they've ruined the looks of the old car by trying to make it more manly and angular. If it ain't broke, don't fix it!

The only change to the looks that I prefer over the older car is the new rear diffuser which looks suitably sporty. Anyway starting up the new 6.3 liter V8 results in a volume and deep burble that is at least as good as the monster 65. Once on the move, it also produced a much more obvious growl/grumble even on a light throttle.

The new Merc auto gearbox fitted to the 63 is miles ahead of the box in the 65 (and most older AMGs). Even though its not one of the fancy new style dual clutch automated manuals, it executed gear changes with almost instant shifts and nice throttle blips on down changes - easily the best traditional automatic I've driven.

The test followed the same format as before so it was the slalom first. The new car has a more advanced version of the ABC ("A"ctive "B"ody "C"ontrol) system fitted to the 65 and I have to say it worked extremely well - it was so good that I couldn't feel any body roll which is extremely good for such a heavy car.

The SL63s extra tight handling allowed me to push through the slalom at least 5mph faster than in the 65. The brake avoidance test showed just how good the electronic control systems are in the latest generation of Mercs. Whereas the SL65 was nothing special the SL63 was amazing.

The instructor made me do three runs with the final one at 70mph, he left it so late signaling for me to stop that I was saying "no way!" at least 10 yards before slamming the brakes on and steering round the cones that I was certain we must have hit. The SL missed the edge cone with at least a meter to spare - very very impressive! The wet braking tests were much the same as in the 65 so nothing to report there. 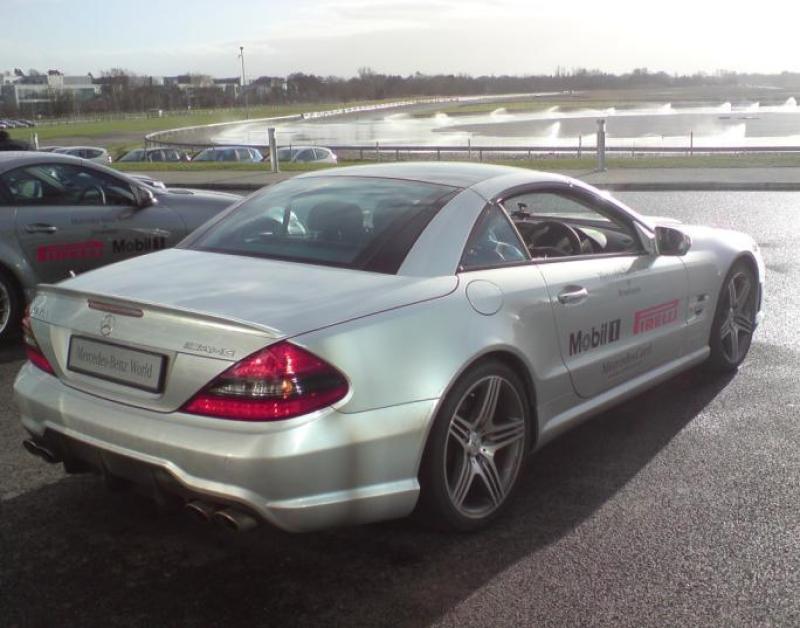 Over on the skid circle the SL63 was a joy to drift. I only span twice (compared to at least 10 times in the other car) and managed a full lap and a half in one continuous drift.

On track the SL63 felt quite a bit quicker than the 65. Perhaps this was because the type of twisty track didn't suit the brutish 65 as well as the 63 but I think the better handling and non turbo power delivery allowed me to push harder with more confidence.

Even when pushing the car hard there was very little sign of understeer and the power was so flexible that the tail could be made to slide at corner exit in an easily controlled manner. Ok, on the short straight we didn't get up to 120 like the 65 but I think we were hitting 115mph by the end of my session.

Over on the skid circle the SL63 was a joy to drift. I only span twice (compared to at least 10 times in the other car) and managed a full lap and a half in one continuous drift.

Overall it was great fun to have the chance to drive these cars on track and if I had to choose between the two I'd take the SL63 as the better car.

SL65 is a great car but unless you go to the drag strip every week, an SL55 is the better choice (better handling and smoother power delivery).

So the baby SL63 is easier than the big brother SL65 to drive ?

Was. And probably still will be. Why would Aston do 700+ horsepower SUV? Seems ...

wasnmt trackhawk the most powerful?

Is this some kind of joke? Just goes to show that Germans lie about ...

Naah, it's an American thing and only Americans can comprehend, I doubt an idiot ...