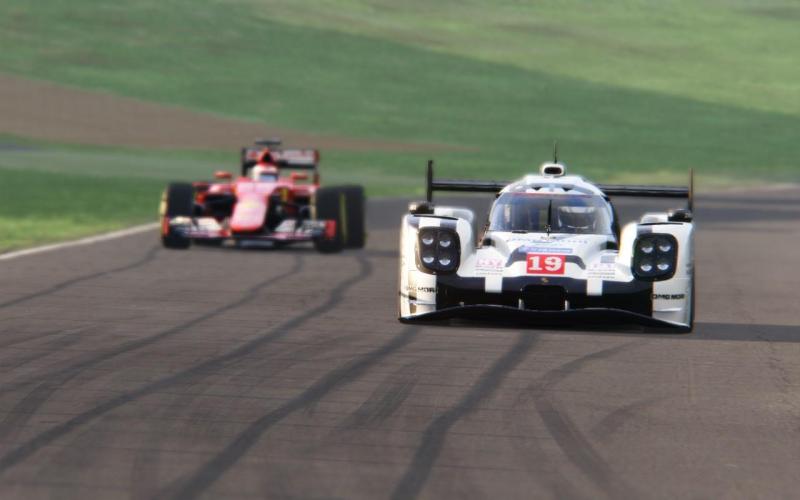 As someone who has followed Formula 1 for years and sees endurance racing only once a year (24 hours of Le Mans), I have grown a bit ignorant thinking that Formula 1 cars should be fastest at everything - fastest in corners, fastest in braking and fastest in acceleration.

While they indeed are fastest around track, and therefore should be considered as fastest overall, same can not be said about acceleration and top speed. If an F1 car and LMP1 car met at traffic lights (I know, very likely...) the outcome would be not what I expected and highly embarrassing for the "master series" Formula 1. The truth is that LMP1 car would beat it in a drag race by a country mile - it wouldn't even look like a race.

Here are some numbers: According to my (generous) estimates, modern F1 car does 0-100 kph in ~2.5 seconds and 0-200 kph in slightly over 5 seconds. According to same estimates and Porsche's data for 919 Hybrid, LMP1 car does 0-100 in less than 2 and 0-200 in 4.5 seconds. This translates to quarter mile differential of ~0.8 seconds, which is difference between a really fast sports-sedan and a supercar - we are talking multiple car-lengths.

Unless F1 dramatically change technical regulations to allow for all wheel drive, LMP1 cars will remain fastest accelerating race cars for years to come. 2017 F1 regulation changes do not address straight line speed, and, if anything, will make F1 cars even slower in straights. Not that they are slow compared to anything other than LMP1 - lets not forget the amazing Valterri Bottas 355 kph speed-trap in Brazilian Grand Prix just few weeks ago.

frankly I think all car racing would be more exciting if they threw a deer out onto the track every third or seventh lap .

LMP cars may have quicker acceleration (due to F1 sporting regulations) but they're nowhere near the fastest accelerating. Top Fuel dragsters are insanely rapid. A top fuel dragster accelerates from a standstill to 100 mph (160 km/h) in as little as 0.8 seconds, reaching speeds of 335 miles per hour (539 km/h) and finishing the 1,000 foot (305 m) runs in 3.62 seconds.

What some narrow-minded people here cannot understand is the Fact that LMP cars are pushing it to the limit always trying to set new records for their bigot fans(919 Nur lap as example).

On the other hand F1 cars, that doesn't need to proof nothing. They just race for delight and fame. And their fastest lap times come from actual races with traffic but LMP cars records were special held runs without traffic and with other preparations....
But in the end, A Lion(F1) doesn't concern himself with the opinion of a sheep...
F1 is still the queen of motorsport!

Brake comparison between F1 and LMP1

(there seems to be only a german version of this text)

Two years on and that link to Bottas' speed-trap is still wrong: it should say 373kph, not 372.

Sorry... I love LMP1 cars but even with 0-60 the F1 is a match and these "estimates" that we see all over the internet are not needed... Hard data is available. Top tier F1 = 0-60mph in approx. 1.7 seconds: The RB11 was clocked at 1.7 and current (top) F1 cars are comparable. The information on the following page is outdated and low compared to this year's cars which are also pulling over 6 lateral Gs in the corners. Wish we could petition FIA to not cripple the cars next year... It's not going to make a huge difference in the "racing" and it will be less satisfying for the drivers who deserve to be smiling at the limits of what their bodies can handle (they are in F1 after-all). https://www.zeroto60times.com/formula-one-f1-0-60-times/

Raikkonen is still fast. Ricciardo is closest Italy has to a star driver and he's Australian lol. Williams reminds me of Manor and Minardi.LMP cars sound faster.

I don’t think people realise that LMP1 cars are purely based of off endurance racing, so they require more mechanics inside the cockpit to make the driver last hours while he drives inside the car, where as an F1 car is based on track laps and being the fastest round a track, and to last about 40 Minutes to an Hour due to their delicacy.

Both are great track cars but are used for completely different reason in racing.

And you are race cars guys ?

Look at this
COTA Circuit 2017

That stupid article above could be good for a kids website, but not here

Formula 1 are by far the fastest car on earth , racing is not about going in rocket in a straight line

In responding to this I want to respond to both the article, and some of the points other reviewer's make below. In the article you stayed simply straight line speed, 0 to 100 and 0 to 200. That's nice but road racing, and that's what makes both Formula One and LMP racing so exciting, is about breaking and cornering. Can you find some stats on lateral G forces 100/200 to 0 times and distance.

It seems we as humans are always searching for God. Some penultimate power that is 'the best'. As Dr Duke lists below, at the end of the day, it's all about lap time. Same can be said when Indy and F1 ran at Montreal. The slowest F1 was still 3 seconds faster than the pole for Indycar. A quarter-mile run does nothing if you have to make the return trip, and the numbers don't lie. Watching LMP, unfortunately, is almost as bad as F1. The same guys win over and over and very little battling over than keeping one guy behind you. The sheer fact of the track times dictates that if I'm .10 seconds faster than you, by the end of 10 laps I'm a second ahead of you. Watching Hamilton go from last to 2nd is a matter of pure math and not as much driving skill. Passing GT cars on track can add some excitement, but F1 needs about 8 more cars and a more relative supply of engines to keep things tighter and more fun to watch.

I think the 2017 F1 cars are faster in a dragrace than the 2016 cars because of the (much) wider tyres that provides plenty of more grip :)

It must be noted the tires that they use in F1 and Le Mans, the Michelins that the LMP1 cars use are proper tires, that can be triple stinted in some conditions but are nonetheless a great tires.
The Pirellis in F1 however are just for show, so maybe there could be a comparison a qualifying times but during the race F1 drivers cannot push at all!

Or maybe talk to a member without sounding like a pompous arse, It does wonders when you don't sound like a dick.

Rimac 8.6 quarter, done ,dusted ,filmed, timed,no excuses. If it was blue you argue ...

Forget the GTS ACR, this is the real track monster ...

It's interesting how the Toyota Avalon is classified as "full-size" but ...

"Hypercars" aka "Supercars", known to the rest of us as... sportscars.

Yeah, I thought those acceleration times were weird and very off. I'd say the ...

I'll leave these here as a placeholder, I'm required in other spheres. But tomorrow ...

The stock Tesla S is a daily-driver luxury sedan, you can't honestly whine about ...