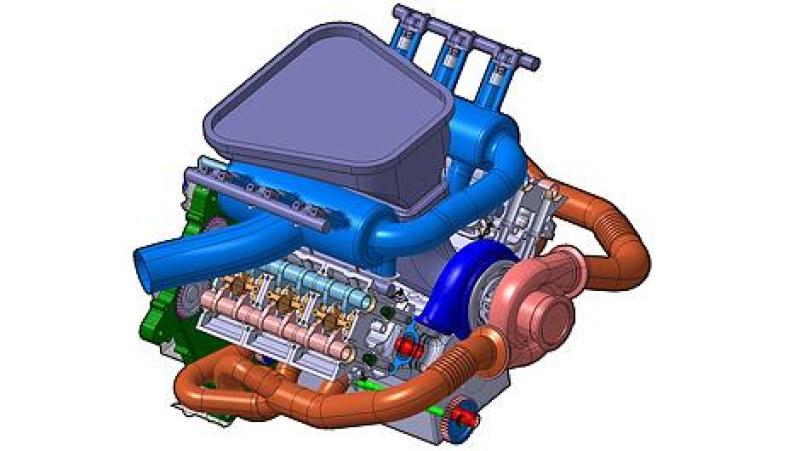 I will admit, I lost formula one around midway through the 2013 season. That cocky German kid was to be crowned world champion again, those soft drink blue cars were to take the manufacturers championship.

I have seen it all before. I wanted excitement. Intrigue. Competition.

Red Bulls did seem promisingly slow at the season start, and Mercedes did look like they had improved. It was a small glimmer of hope. A lone candle of hope in a Red Bull wind tunnel.

It wasn't to be, of course. I lost hope and hope is the last to go. When there is no hope, there is nothing left to keep my interest. And so I missed the remainder of the season couple of races before S.V. became the mathematically irreversible world champion.

That was the 2013 season. It didn't really exist for me. It was a crippled, half-vanished set of broken memories. I still don't know the final standings.

Many fans have expressed disappointment with the way V6 engines sound. I can see where they are coming from. But, regardless, better or worse these engines sound, they are different. It is a change.

This change is so profound, it has the potential to swipe away the team rankings status quo almost completely. And that in itself is a reason to feel some excitement pre-season.

This excitement will probably dim as quickly as it built, and after 3 or 4 grad prix, it may all reduce to same hopeless depression of last year - I am certainly not hoping for the best. My expectations are none.

What I do know, already, is that 2014 formula one cars are completely different, and no matter how the team competition plays out or if there is any competition at all, the sole interest of seeing turbo v6 F1 cars on track at at full speed, will be enough to build more pre-season excitement than in last few years.

F1 is so messed up right now. If it weren't for Rosberg, this season could have been over by the 4th race.

And worst, since the stupid rule says that all manufacturers had to agree to unfreeze the engine development, and Mercedes said, no way am I going to give up my advantage, next year they'll still have 60-80hp more than everyone again.

A few months ago already Red Bull confirmed that F3-youngster Max Verstappen will race for Toro Rosso in 2015. He's just 17...

pure luck indeed. but if the renault engine wasn't so pathetic, he wouldn't have been stuck behind Perez the whole time, and wouldn't be in that situation either. Perez, all that hold-up for nothing. In the end, zero points, and a grid penalty for the next race. The podium should have been 2 redbulls and a williams.

but who would have thunk... Monaco, everyone was easily a second a lap slower than mercedes. Montreal, where it's all fast straights and slow corners, the field was so tight. First round qualifiers were just over a second of each other

How did Vettel avoid this? Pure luck, lol

Red Bull yesterday scored their first win in this season and the first non-Mercedes. But fairly you have to say that it was caused by all the troubles of the Mercedes and other coincidences and accidents.

Congrats to Ricciardo for his first Grand Prix victory!

"But I think at circuits that require high downforce, like Monaco, Singapur, etc., they will be in front of the Mercedes."

I correct myself: I think they will be more competitive at circuits like these.

I don't think you have been up to date with formula 1. Mercedes has a completely different set-up design than Renault and Ferrari, giving it more HP, and less heat. Nothing of that will change. The only change is those electric units.

And so what if RB or some other manufacturer wins 1 race... oh wow, that's so gonna be exciting to see if the others can take a single win away from mercedes!

"Engine designs are frozen for the rest of the year. Formula 1 this year is over."

I have to disagree. Changes that are being proposed for reliability, safety or cost-saving reasons are accepted and can have the side effect that the power increases.

Because of new downforce regularies that doesn't allow as much as last year, I think RB is able to produce more downforce than Mercedes. Also we don't know if the power advantage will still be an advantage at Monaco. Cars got very sensitive with the use of throttle.

lol, we're not talking about a few hp difference like a couple years ago. 50hp, given the same car weight, length, and designs is an insane advantage. Redbull have had to take off downforce for more speed, yet are still 10kph slower at the end of the straight than Mercedes despite using much shorter gears and reduced downforce. Mercedes can afford to be faster in the straights, corners AND use less fuel too. And if you think Mercedes is lacking downforce for Monaco, they have been on Pole for the last 2 years (even when there was no power advantage)

But I think at circuits that require high downforce, like Monaco, Singapur, etc., they will be in front of the Mercedes. In Malaysia and Bahrain we saw how much faster they already were in these kind of sectors.

The mercedes powered cars have easily 50hp more, more fuel efficient, and more reliable. Engine designs are frozen for the rest of the year. Formula 1 this year is over.

RedBull will not be quicker than Mercedes. There is fundamental design inferiority in the engine. They will not be able to compensate for it.

If RedBull gets either one, I will eat my hat.

Since the new season has already started, I am really surprised about Red Bull. I didn't expect them to get back into business that fast.

But till they are fully back, Mercedes will be some points ahead.

@BR2
Till F1 is like that we will have to wait many years...

there's no way renault engined cars can climb out of such a hole. Even if they catch up like mad, they'd still be some 2 seconds off pace and that's a death sentence

This year it looks worse for Red Bull, to be more exact: All Renault powered teams.

The new Renault Energy F1 2014's are not very relibable yet and it seems they have less power than Ferrari's 059/3 and Mercedes' PU106A Hybrid. Even if they get their engine competitive they will lose some races, important races for the championship.

Red Bull, etc. have a big disadvantage for the new season, what increases the chance we won't see a Red Bull dominated season.

But we can't exclude it completely.

Ok, now I am convinced that ferrari is in the dawn of a new "turbo" age.
http://www.autoblog.com/2014/02/12/ferrari-california-t-official-pics/
Thanks to F1 maybe?