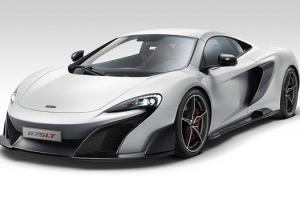 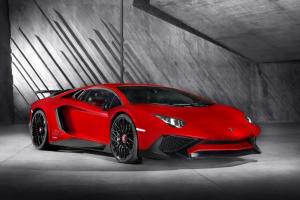 This comparison has been viewed 14.7k times. 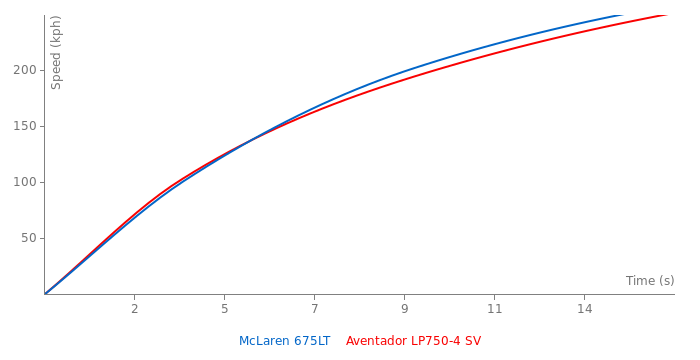 McLaren winning on all tracks by over 0.5 seconds. Awesome car, not to say the Lamborghini isn’t, but expected more after such an awesome time on the Nürburgring.

What does straight line speed mean on this? Because even where there are quicker RWD cars, I notice the AWD car usually has better straight line speed. The 675LT clearly beats the Aventador Superveloce on all tracks and will beat it in anything over an eighth mile.

...You might want to re-read what i had said.

Well don't put me in the same class as you.I never made anything up or any other assumption like you do.Plus these sources confirm the Mclaren's claim
http://www.autocar.co.uk/car-news/new-cars/mclaren-p1-confirms-sub-seven-minute-nurburgring-lap
http://www.autoexpress.co.uk/mclaren/p1/84823/mclaren-confirms-p1-nurburgring-lap-time
If you calculate the the time from the data it is a bit faster than 918.I like how if some one questions porsche's lap,there will be angry faces but if ferrari sets a lap time,everyone accuse them of cheating like the case of 488GTB LeMans Bugatti time.

p1 was not intended to break records? Then what is mclaren saying all about that it will be "the fastest in the race tracks"?

As for tracks they did say that.

So in conclusion then we should also treat Porsches claim with same suspision as other manufacturers.Also if yours was the case,they wouldn't even release average speed around track.

Tomorrow I can become a manufacturer and release lap time without video,it is naive to believe the time just because a manufacturer says like the 991 GT3 time of 7:25.It is the same as not believing the average speed.

That being said you are free to think what you want.

And Mclaren are really BS. All that self hype and saying their car will be the fastest super car on track and that and be the best drivers car of all...

It's no wonder they didn't release their laptime.

...You dont build a car like the P1 and not intend to break records, And wasnt it McLaren who said the P1 wold be the worlds fastest car in both acceleration and around track, And the best drivers car ever?

And considering they havent released the laptime...After 4 YEARS, That should tell you enough...

Let's just say mclaren p1 ring numbers are just pure hype and no substance unless a hotlap video is released which isn't going to happen as it didn't beat the porsche lol.

Sorry a mistake.Average speed was 111mph according to Auto car,Evo and Auto express.

First of all 7:04 lap time is just a rumor,there is no reliable source about that event.And secondly,Mclaren didn't agree to that time.S ince most of the things you say are made up and mostly wrong like 991 Turbo S being faster than 991 GT3 around track,GT3 cars doing 6:30 at full ring when the time is for 0.4miles shorter track.So I would like you to show the proof or admission by McLaren about that lap time.

Only official statement from McLaren is the 110mph average and that's it.I am not saying it beat 918 or so and I already admitted about 6;54 being wrong.So what more do you want?

Mclaren is not as crazy as setting ring lap record as much as Porsche is,it is clear from the statement made by Lazante.So according to your logic McLaren should be scared of P1 LM losing to 918,Laferrari.

And the 6:37 was not the lap time McLaren claimed P1 would do,it was just to inspire the workers about the P1 and that too is wrong as.6:33 lap was used for promotion purpose.

And lastly I do agree that P1 needs optional tires to beat 918 and then if you can't believe the statement by McLaren,there is no need for me to believe Porsches statement.And FYI McLaren always only said the average speed of their car around a track.Take for example F1's mira circuit and millbrook record.And that too was done to give the retiring owner of a track a memorable moment.

LOL. Mclaren not interested? They tried to set a fast lap with the 12C. They crashed. They swiftly tried to cover it up and act like nothing happened.

Then the P1, which they OPENLY said it would obliterate the Nurburgring lap record, even leaking numbers like 637? Then they managed only 7:04 before the winter kicked in. And then they said... actually the 637 was a joke and they are confident the car can set a time under 7 minutes... Then the next ear they go again, and then finally announce in a half ass edited celebration "of course we did it under 7 minutes".

At the time Mclaren and most of the world believed the P1 would be MUCH faster than the 918. Of course we know thats not true now. But at the time, I think Mclaren was embarrassed that their car was more or less about the same speed as the Porsche and hence chose to try to downplay this result.

Of course the car can do under 7 minutes. CAN and did are 2 different things. I'm guessing they used Corsa tires the first time and found it too difficult without another nurburgring crash, so they came back again with trofeo Rs which definitely did the job.

Another reason why they didn't release lap time can be that they weren't interested in doing a record lap.If they were interested we would have seen manufacturer laps for cars like 12c,650s as 911s also had manufacturer laps but not McLaren.
Lazante has said that they weren't interested in doing efforts for P1 LM to do record laps,if they didn't get desirable conditions for lap time like Porsches.
Also if they were scared of losing to 918,we wouldn't see the lap times of P1 we now have.
And please try to type without spelling errors in the future so that it is more readable and is more understandable.

Fact is McLaren should have released therected latimeshould 3-4 years ago when they completed it, It's Fkn retarded they sayou they did it and still to this day they haven't.

Now your English is off too. There's a difference between precision and accuracy. 6:59 isn't wrong. 6:58.7 rounds up

6:54 however is definitely "wrong"