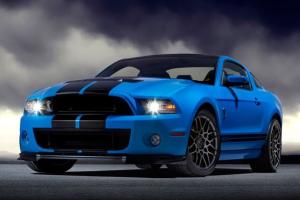 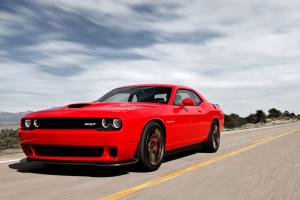 Challenger SRT-8 Hellcat is the fastest by a small margin. 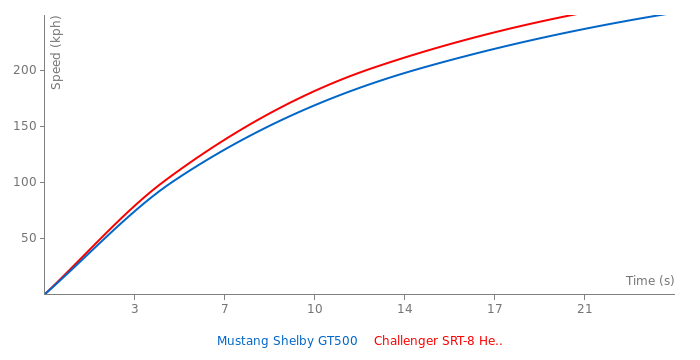 Having read many of the comments below, it seems to me that every American (and non-American) has different views on what constitutes a "muscle car", a "sports car", and even a "pony car".

I know someone who considers anything made past like 1973/74 to not be considered muscle cars, but rather sports cars. Admittedly he's not a huge car person. Personally, I consider just about ANYthing with a 5.0L+ engine to be a muscle car, and ESPECIALLY 6.0L+, and all muscle cars need to be 8 cylinders with no exceptions (other than the very rare occasional turbo 4 or 6 limited edition cult classic from the 1980s, like SVO Mustang, 20th Anniversary Trans Am, or GNX Regal).

Of course muscle cars need RWD. Having the front wheels spin means it's not a muscle car, for two very different reasons: AWD will pull instant torque (akin to an electric or rally car), and FWD cannot handle more than 350 hp in most cases (as most FWDs tend to be economy cars or hot hatches).

With that being said, I wouldn't necessarily consider cars like the M3 E92, C63 AMG C204, or GranTurismo M145 to be "muscle cars". True, they have naturally aspirated V8s, RWD, two doors, came out in the late 2000s and early 2010s (around the same time as the revival of the "true" muscle car). They're also inexpensive to buy these days and around the same value as a Boss 302 Mustang, a Shelby GT500, a Camaro SS 1LE, a Camaro ZL1, or a Challenger SRT8. But they are far more expensive to repair. And most importantly, BMW, Mercedes and Maserati ALREADY ARE associated with "fast/snobby" even as brands themselves.

I agree with one commenter that a muscle car cannot start off as a sports (or luxury) car. The only exceptions to the rule are the AMC AMX (a sports car, but based on the Javelin pony car) and the Cadillac CTS-V/CT5-V Blackwing (a "luxury" car, but always has been cheaper than competitors from the start AND based on a variant of the Holden Commodore/Chevrolet Camaro chassis).

Also, because Cadillac (and Lincoln too) DO have a history of slapping unusually BIG-displacement engines into unassuming non-performance-oriented cars, AND that their status as "old man's cars" differs them from the "snobby/(young) bad boy" association of most of the European brands, it might as well be easier to call their cars muscle cars. Albeit they are a little too big to be classified as such (especially those from the 1960s and early '70s).

Cadillac has V-Series and Blackwing models. Lincoln has Grand Touring PHEV models. All three are absolutely a good start to appeal to youthful enthusiastic buyers. But they're still not the snobby machines a gold-digging Tinder or Bumble girl might associate with.

No one will get "ugly" on this thread. The reason is simple. The definition of muscle cars constantly changes...and anyone's opinion is as good as any. I choose to take a historical approach. I've seen Vette's that were modified into dragsters. I've seen them modded with oversized motors...which made them muscle coupes. If you read about stock Vette's, you will see them referred to as "American Sports Cars."

Oh im sure they will come out, Give it time.

Its nice to see we can have this discussion without the typical fanboy rage. Why can't every discussion be this way? lol

Thats an interesting way of looking at it, But saying that, one could say that a STI is a SuperCar compared to a Mini Coupe, But i can kind of agree with that view point, But at the same time there needs to be something solid, Althoug there really cant be since this is quite subjective, But i get what your saying.

WRT muscle cars...the Corvette never fit the original definition (see my earlier posts). It was an American Sports car...and always has been one. In the 50's and early 60's....it's performance was comparable to high end Euro sports cars. From the late 60's until 2013, it's performance was not in the same league as supercars. The new Corvette can now play in that arena. It has made substantial progress in handling (as well as interior build). The Viper is an American Supercar. Are they as good as the best supercars? No, but they cost 80% less. Neither, is or ever was, a "muscle car." Muscle cars by definition are cars that can be purchased by the "working class." The modern Mustang and Camaro are "Pony-Muscle." The modern Challenger is "Muscle." As they get better at handling/stopping....they are evolving away from the "muscle" definition....which will be obsolete in a few years.

Looks like the Charger will get the blown 6.2. It may end up being the fastest sedan in the world. http://www.torquenews.com/106/707hp-dodge-charger-hellcat-all-official

Why BR2's last comment was scratched? It was normal discussion, nothing rude, uncensored or offtopic.

I mean if you compare C6Z06 with Dodge Challenger it could be a supercar, but when you compare it with Ferrari Enzo it is more like muscle.

I dont particularly think its lost any of its Sports, Muscle, Super attributes , I think its more in how the times are changing. Vipers and Vettes by practicaly everyone have been called and considerd Sports, Muscle and Super, And i agree. But i still say SuperMuscle, And what do you mean Enzo and Pagani?..

I think the Corvette has evolved from a muscle car in GT in the mid-'70s, when it lost a lot of power, but has received significant improvements of braking and cornering. Viper, I think, never was a muscle car, but I can understand some logic when the nowadays Viper and Corvette is referred to the muscle, - in comparison with Enzo and Pagani they are.

True it does, But i think the C6 looks more like a traditional SportsCar then the C7, Id still consider it Muscle, But less then a Stingray, C7 is pretty exotic and definetly a head turner, Specially here it would be.

As for the C5 ZO6...Id say its more Sports then Super, And more Sports then Muscle, But has propertys of both MuscleCar, SuperCar, And SportsCar, Vettes have always had those similiaritys with each category of cars, But as the generations get better, Theres more of one then the other, The C7 theres more Super, The C6 also but with a tie in Muscle and Sports, C5 has a tad bit of everything, But id say more traditional Sports, C4 more Muscle then anything, C3 and C2 definetly more muscle, C1 Sports.

As for handling, I dont particularly think handling should have anything to do with it, Handling is "Extremely" subjectiv(As is everything-_-) But old school tradition point and squirt Muscle seems to fit that bill, but was never a need. German Muscle is practically he same way.

The Stingray offers the same options and then some that put it a step above a C6 Z51 handling package in terms of handling capability and feel.

What, in your opinion, is a C5 Z06 considered? I've always considered it a sports car. Lightweight, good handling, quick lap times, competed with the best of the best during its production run, and so on.

My problem with using the term "muscle" to describe any car like the viper or corvette is that the term is usually used to describe cars with lots of raw power, but limited handling capability.

@BR2+
What do you consider the Nissan GTR?

Bugatti4Life the real one 28m

Then why get it?

With the same tyres the Z will be neck to neck with the Supra ...