Porsche 918 Spyder vs Mercedes - AMG One 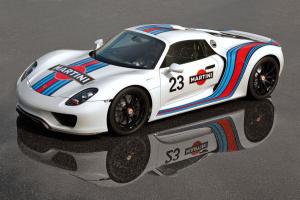 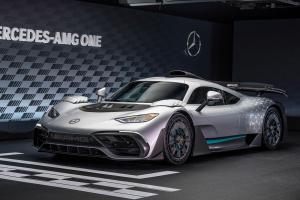 This comparison has been viewed 427 times. 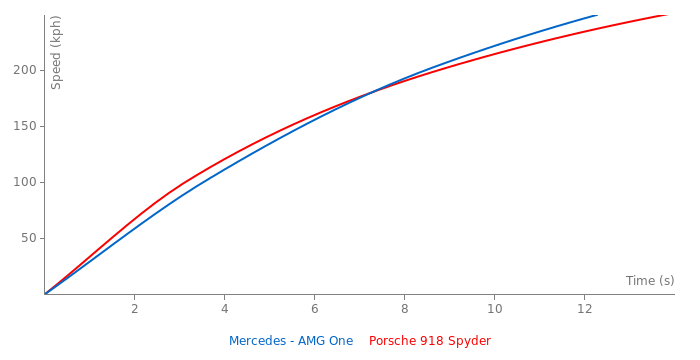 I know a lot of people drew comparisons of the AMG one with the SF90, but I feel this comparison will give us a closer resemblance and maybe offer some of the pros and cons of the hybrid system. They have similar weights, the 918 being a bit lighter. Both rely a lot on their electric power (the SF90 much less).

The One relies a lot more on its electric motors for performance, and can distribute a more balanced power distribution over both axles when traction is limited (like drag races). The 918 only has a mere 127hp from the front wheels so is mostly RWD. So in terms of acceleration the AMG One will be a monster in a straight line.

During hotlap or qualifying mode, the 918 dumps maximum electric power, and the car will run out of juice after 6-7 minutes of lapping. The car is significantly slower when the juice runs out (like on the back straight of the nurburgring, the car barely made it above 280kph). While not being in hotlap mode, the power is delivered more sparcely and juice is maintained much better, but the car won't lap as fast as qualifying mode. In the Sport Auto test, the car had enough juice and was going over 325kph at the back straight, but overall it was a much slower lap.

The AMG One. has a larger battery, but draws much more of its power from its electric motors. In theory would run out of juice even faster than the 918. However with modern F1 engine hybrid systems, the regen system is more powerful, drawing both from braking (KERS) and thermal energy of the turbos (MGUH). But because it's electric output is some 200hp more than the 918, it will be a very hard task to regen enough juice for a full lap of the Ring. To get a maximum effort laptime out of this car there needs to be some strategy where and when to deploy the electric power (like the 919).

The AMG One uses wider, stickier tires (the same ones on the AMG GT black series), and weighs just a little more than the GT black series. Without the electric motors it's only got ~560hp. Over a long lap like the Ring, it might need to hold back a bit to avoid running out of juice, so I'd imagine it be maybe 5-8s faster than the GT BS. Faster, but not like a huge leap. Over a shorter lap, the One with maximum effort will likely be a much faster car.

When mercedes with Juan manual fangio won the 1955 formula 1 world championship with ...