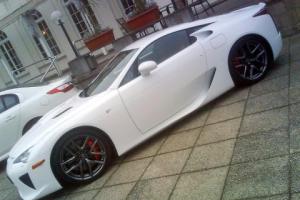 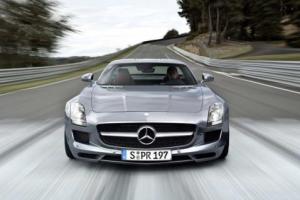 SLS AMG is the fastest by a small margin.

This comparison has been viewed 5k times.

English: 'The LFA, it dominates (AMG Mercedes SLS) in the way of a precise formula-racer'"

From German Magazine twin test, as detailed below.

This is the one comparison that confuses me the most. It feels like an Opposite Day comparison because the Lexus LFA pushed above its weight in the market, while the Mercedes SLS AMG pulled below it.

Displacement is an important key here, ESPECIALLY for grand tourers like these cars. I will exempt (excuse) cars like the Corvette and Viper and even the SL63/65 AMG because they're more rigid sports cars (and a commonplace GT, in the case of the SL AMG). We'll not include those here.

The SLS AMG was priced in the same bracket as cars like MP4-12C, 458, Gallardo/Huracan, and 911 Turbo S; however, it actually competed with (no McLaren equivalent), F12, Aventador, and (no Porsche equivalent). It was basically a long-hooded muscle car with class with a whopping 6.2 liter displacement; it had RWD and a V8 as well, and even front-engine displacement— all commonplace in cars like the Corvette and the American pony cars. (Mercedes did it cool by being the bigger guy than Audi, BMW... these two ... Benz and Jaguar ... had the balls to make 5.0L+ V8 engines unlike most of those other European guys).

The LFA was priced way too high for the engine displacement it sported. It was much slower than the cars in that price bracket. At 4.8L of displacement out of a high-revving V10, it slottted between 458 and Gallardo... also with 552 hp. Nothing about this car screams "F12" or "Aventador" rival.

My money would have been on the Lexus LFA.

The only person who post neutral comment here is Karthick01. I like LFA but it's little thirty compared to SLS. But SLS is also more comfort than LFA and I always choose Mercedes for a comfort sport car because My mom had 190E Evo II and even it's a sport car with bodywork, it's still very easy and comfort to drive.

This is not the 3345 m Contidrom used by AutoBild - nor the AutoZeitung test track, which is TÜV Rheinland's circuit 'Vehicle Testing Mending'.
Can we add the Contidrom 3800 m?

@names:
slow down man
first lambo is not all about going fast but lexus LF a is
secondly veyron is not supposed to go fast on corners and you are comparing a 2010 car to a 2005 one

Really? How did you conclude that? Just through some straight line numbers? With half decent extreme performance tires, it will easily run 11.4 - 11.5 seconds in a straight line.

Maybe the sportauto test list of Nurburgring lap times will open your eyes:

the LFA is very slow for it\'s HUGE price

Georg: Thanks. LFA was also wearing very sloppy Bridgestone S001 tires, which were far inferior to what most other supercars wear.

However, like you said 458 Italia was reaching higher speeds on the straights with LFA at 173 mph vs 190 mph for the Ferrari 458 Italia.

The acceleration numbers are accurate. I would tend to say that LFA\'s drag seems to be the biggest issue.

Frontal area: 2.01 meter square (much smaller than most supercars).

It must be the wind drag that is causing it.

the reason is the poor airdrag index of 0.79 (look AT MY LIST postet in the Lotus Forum..this List I have writen here for fastest laps some time ago!!!!!!!) You back up your claims with my numbers and tell me I talk crap.. LOOOOOOOOOOOOOOOL about you!!!!!!!!)

But back to topic...

the LF-A can only reach 186mph in 6. gear... the combination of the poor airdrag index and the long gearing of the 6. gear is the reason for the poor 0-300km/h time the 6.gear reaches to a theoritical topspeed of ~345km/h or 215mph which the LF-A can´t reach because it lacks the power... but it is geared that way.

Look at all of these aerodynamic tests. LFA has one of the smallest frontal area:

The issue like mentioned before that SportAuto brought up was the drag caused by the spoiler raised up, which brought the drag from 0.34 (much like any other supercar) to truck-like 0.40 creating too much weight over the rear wheels.

I do agree that Lexus should have a way to retract the spoiler, but still this test in no way is indicative of how fast LFA is from 0 - 300 KM/H

LFA has tested 0 - 150 mph without any launch control in just 18 seconds. There is no way on earth it will take such a powerful car to achieve the last 30 mph in over 30 seconds.

Yes I have the full scan of the article.

SportAuto clearly wrote that the drag coefficient goes up to a big truck like for 0.3981 with the spoiler raised up. It is great for handling, but for top speed acceleration, it adds too much weight over the rear wheels.

The spoiler comes up automatically at 80 km/h and is meant for high speed downforce and handling.

LFA is faster with temporary bridgestone tires on the track that tests everything best.

If LFA indeed were wearing its spec tires (under development), it would have run much faster.

You obviously are not telling the truth.

Yes, I did read the article and the only reason why LFA\'s 0 - 300 km/h acceleration was slow because of this:

LFA\'s spoiler automatically deploys at 80 km/h and cannot be retracted. SportAuto clearly said the added weight due to the downforce is clearly for best handling and is not meant for top speed acceleration runs.

ops 3 new laptimes and the SLS is faster...
sportauto rated the LF-A as a good car without a question but for the given perfromance much to expansive.. the aerodynamic isn´´t as good as claimed cW 0.39 (tested) with a frontal area of clocked 2.01m² it reach a air index of 0.78 ...lot more than the claimed 0.69..the car produce lift at the front axle 24kg at 200km/h/125mph, abouve 125mph the accerlation is poor to 300km/h it need TWICE the time that a Porsche 997 GT2 Rs needs and still 8.4s more than a SLS

We need to add these lap times to the database

I love both cars. I prefer the LFA mostly for the engine 9500 rpm rev limit and engine sound. I am sure the SLS is a better daily driver than the more track oriented LFA. SLS AMG is awesome as well. I have seen one in real life and it has an amazing presence.

Ofcourse, it kicked every car\'s a** on the contidrom race track until it was compared to LFA where LFA lapped 1.8 seconds quicker.

(Nemes) I certainly can not argue with you on the LF-A\'s engine note. It truly is sweet. It\'s just now that I\'m a geezer I have to lean toward the old world class of the Benz:)

So that means AutoZeitung is the \"driver oriented boy racer\" preferring type of publication, which is why they made LFA the winner (aside from the superior track performance).

"The standard production cars were limited to 7500 rpm, right?" Sorry the late answer, ...

What is your favorite car?