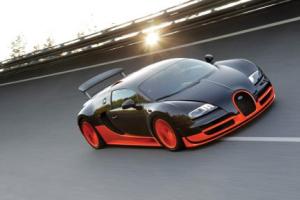 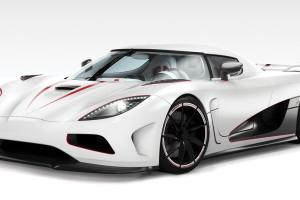 Agera R is the fastest by a small margin. 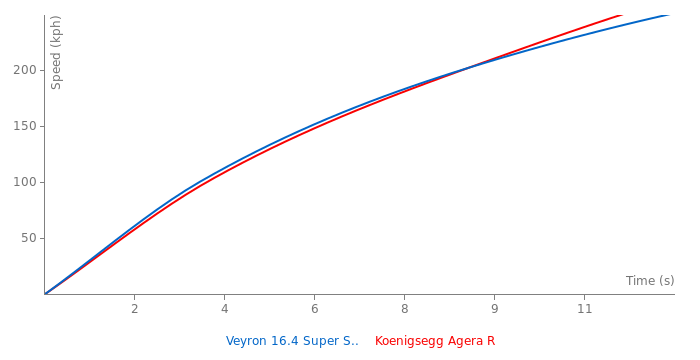 Different tests boast different results, and all Supersport are limited to 255Mph, Hence guineas records dispute, And there open tops are limited even more for safety, 235Mph, The only difference is compared to the SS n Vitesse SS is its n open top(Removable roof) not spyder, and the Vitesse has improved cooling, There's no difference in accreleration, the only thing that would have effected that race is if the top had been removed

In my opinion Agera R vs Veyron SS would be a different story. At least it would be a much closer race.

On M5board there is a post where we can read that there is a chance that they race Laferrari and P1 vs others supercars.

It would be awesome to see that. However im pretty sure that Laferrari and P1 dont have a chance against Veyron SS in roll drag race. Not even saying about Agera R.

I wonder : will it be allowed to race Laferrari in fun roll drag race against other supercars ?

Doesent Ferrari forbid that kind of situation with Laferrari ?

you say that, yet

...Theres no difference in performance between the SuperSport and SuperSport Vitesse, Theres only a 18Lb difference....

I'm surprised nobody's done that race with a normal Veyron SS, the fastest version of all Veyrons. It's always the Vitesse which is certainly heavier, and has less acceleration/top speed.

With top speed mode and a Veyron SS, it should be very close. I still believe the Veyron will have the higher terminal speed, even though it's not really that relevant.

The veyron is a few years off the Koenigsegg in terms of technology. both insanely crazy tho

It shows how insanly fast Agera R realy is.

Fangio Man: I want to see someone take an Agera R and put Koeniggsegg's 273 MPH top speed claim to the test.

@Shaggy
I agree. It will not have any problems to reach the factory claim of 273 mph. Probably 276 mph are possible under good conditions.

And I don't believe that Koenigsegg can achieve 273. That number is just an estimation. Unfortunately K. don't have enough resources to do fullscale aerodynamic testing, etc. Of course they can go Texas style with more boosted power to achieve that for a moment like others did, but I am glad that with Christian attitude to details they won't go that route and ruin astonishing car

@ Fangio Man: I really believe that if someone would bother to test the Koeniggsegg Agera R, it would set the new record for the world's fastest production car, I believe it's capable of at the very least the 273 MPH factory claim.

I expected that, and they are actually hypercars.

@smugolo: the article and video via TopGear. Not sure about the cd of the Tuatara but i believe it was very low (thinking i read sub 0,30 cd) that should make a difference in 0-200mph acceleration. http://www.topgear.com/uk/car-news/ssc-tuatara-0-200mph-run-2011-10-28

What video are you talking about? The only video I have found (and have seen before) is one without any speed shown whatsoever, not even on a speedo. Are there any others?

Even Bugatti's claim that no one has ever repeated in real life with the Ss for 0-300kph (quite a distance to 200mph) is only a little under 16 sec.

I don't really understand what you meant by that. The Autobild number (14.6s) is obviously the same as the number claimed officialy by Bugatti but it may as well be Bugatti tested them in concert with Autobild. Any info on that?

Regardless, that number seems pretty solid to me and seems to imply sub 18s 0-200 time for the Veyron. I wouldn't be surprised at all if the Tuatara really proved to be 2s faster to 200mph but am a bit sceptical given that their other claimed numbers don't match up.

Oh I see now, my mistake.

@E: i meant the aero has significally more drag than the new Tuatara.. that car will have a really eficient front and underbody for downforce so little to no old fashioned spoilers that ruin a good drag coefficient.

Then remember that the aero has significantly more drag

Aero CD was .357 vs Bugatti's .36, it's basically the same. Though the SSC achieves that CD while in "handling mode" (by that I mean it doesn't have to sacrifice cornering to get to top speed).

@Smugolo: they proved to be faster than the 16.4 both in topspeed and in 150+mph acceleration and their record stood untill Bugatti did the Ss... The Ssc testmule (outside Ultimate aero, driveline Tuatara development version) did 0-200mph consistantly in less than 16 seconds.. search for the vidoe on youtube. Then remember that the aero has significantly more drag and a less ideal frontal area... the Production Tuatara will be even faster still. Even Bugatti's claim that no one has ever repeated in real life with the Ss for 0-300kph (quite a distance to 200mph) is only a little under 16 sec. This ssc will therefor be MUCH faster (additional 20km/h in the same time!)

That's probably the reason I want a Corvette, cause that's one of the few ...

Wow, you are very tall.

That sounds believable. I heard something about them removing the Cd ...

Well it's a coupon I should have used two years ago, ...

If you are talking about the top speed I think it's believeable. Ferrari Testarossa ...

I have never driven a Ferrari. I had a chance to sit in one ...