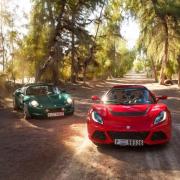 Toyota will stop producing the great car after they made the last 1000 of them. I like it very much. ...

With more power and a 10mm-lower ride height and a stiffer overall suspension setup with revised springs and dampers, Opel claimed that ...

Yes, I know that.

Yes, it's not road-legal. It's piece of art.

kidding? artura is 225000 dollars. How do you get the conclusion?

Symbol of Stupid Useless Vehicle. How could BMW make such an ugly car? I mean, look at BMW M3 E30, ...

Handsome! I love it!

Maybe I ask too much because it‘s called M.😂

I think the whole car is just bland.😂

I mean, just look at the shape of the rear! Maybe BMW uses GTR to make the rear end of ...

Emm, I think the rear is like something being hit by Nissan GTR R35

what the hell? why does this comparison exist?🙃

It's said that being fast at corners is really fast, but without power, you would lose just on the straight ...

Love the old jags. So beautiful.

A nice question, I think. That's weird if 600 is not heavier.

? who? i mean, don't introduce yourself!

Valkyrie and Valhalla will teach you a lesson.

emm, the chinese manufacturers love the ugly and strange design. they give up the ice, and make no air intake, ...

Recently car fans in Europe are lamenting that Toyota did not plan to release the 300 horse GR Corolla in ...

Emm, i don't see why there's such a comparison. it's meaningless.

If my memory serves me well, BMW has applied its patent drawing, and they are trying to make it a ...

E65 is better than the new 7 series i think

well, db9 is more comfortable and cheaper as a gt car. and the final version with the little spoiler is ...

well, a long time to wait😂