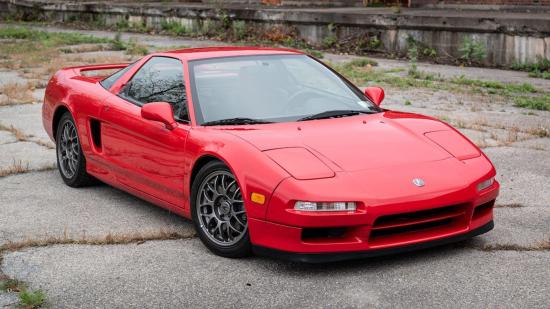 It's year 2000... Wheels were smaller, narrower and engine power and torque outputs were much lower than today.

also explains why modern cars are so much faster around the track. way more traction... also weigh more tho.

It's the same car, only for different markets.

Produced exclusively for the United States, the NSX Alex Zanardi Edition was introduced in 1999 to commemorate Alex Zanardi's two back-to-back CART IndyCar championship wins for Honda in 1997 and 1998. Only 51 examples were built, and they were available only in Formula Red to reflect the color of the winning car Zanardi drove for Chip Ganassi Racing.
The Zanardi Edition was similar to the Japanese market NSX Type S. Visible differences between the Zanardi Edition and the Type S were the Zanardi's left-hand drive configuration, black leather and suede seats with red stitching, airbag-equipped Acura steering wheel, and a brushed-aluminium plaque with an engraved Acura logo, Zanardi's signature, and a serial number on the rear bulkhead. Total vehicle weight was reduced by 149 pounds (68 kg) as compared to the NSX-T, through the use of a fixed roof, lighter rear spoiler, single pane rear glass, lightweight BBS alloy wheels, a lighter battery, and a manual rack-and-pinion steering system in place of the electric power steering.

Should probably combine info then?

Mclauren and financial struggles, another british car maker closing its doors too soon or ...

Electric Vehicle production record as is the electric vehicle battery range records, so they ...

4 speed standard or 3 speed auto were the standard in these aero cars ...