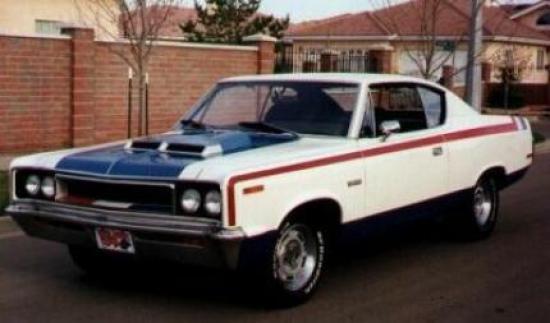 The stripes on the Machine in the photo are home made. The real stripes look much better. The internal pieces rcpaulsen is talking about are the Forged steel crank shaft and piston rods as opposed to cast iron pieces used in normal cars. The external pieces were the dog leg heads, special intake manifold and exhaust manifolds. With remarkably little in the way of performance enhancements (a valve job) and some Group 19 performance parts, the car was capable of 472 horsepower and 12.73 in the quarter. Not too shabby for an extra (then) $500. No competitor could sell you car making that kind of horsepower, handling (best of the muscle car era) and options for anywhere near the price AMC did.

"THE MACHINE" was putting out a lot more than 340 HP, but the factory downgraded it (1) to give it an advantage in "stock" drag racing classes, and 2) for insurance purposes. While the engine block was visually and dimensionally identical to AMC's basic 390 on the outside, it was a special casting with extra internal webbing for durability, and most of the internal pieces were special high-performance parts. My father bought one new in 1970, and he shut down 427 Chevs and 440 Dodges with regularity. When he sold his MACHINE in 1974, the new owner got serious with it and cleaned up at the local dragstrip. It was a "loss leader" for American Motors, to get the word out that they were fully capable of competing in the horsepower wars. An AMC factory rep (very quietly) told my father, "You do realize that engine costs more than you paid for the car, right?"

How did that brick take the top honours on the TGT? Is it a typo or did it have J Tubes attached for the run :-)

lol this is true

yes the base model was called the the Rebel. this perfomance veirson was called "The Machine"

not bad looking, but is it really called the Rebal Machine? lol

Well, you know me and numbers! Ofcourse I will!

This aged… not so well

Das good ya! Love the car too! Well done!

Nah i can't stand Musk and his attitude so i will ...

Thank you, that reminds me, I've to look further into the ...

doesn't look to have the aero for nürburgring, this is not the first Chinese ...