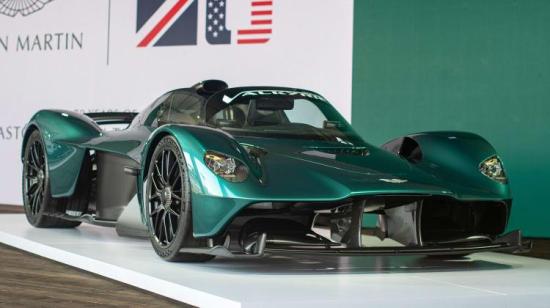 Aston Martin slowly beginning to fire on all cylinders. 12 of them. Forza! ;)

Quote>"Aston claims that the Track Pack can deliver around 8% quicker lap times for those looking to muster every last millisecond out of their track time, depending on track conditions.

What’s in the Track Pack? Well, there’s a new front clamshell and a whole new set of body panels for even better aero, superlight titanium brakes, magnesium wheels with carbon aero discs and a new suspension setup that includes updated dampers and roll bars, plus a 50mm decrease in ride height. The whole pack takes Aston Martin two days to swap the panels around."

From memory I don't believe it's road legal so I'm not sure how successful it will be. So it's a halfway house between the standard Valkyrie and the Valkyrie AMR Pro which has been completely redesigned.

From the same article below> It measures only 39.5 inches at the top of its canopied roof.

See even I missed that juicy little detail. It's essentially a hard point unless it's in the time since its release been altered. Well no such information exists, and nothing that I'm aware of for width or length.

In comparison the other English slayer the McLaren P1 was 44.8" in race mode. About 6" inches in comparison. Which is a hell of alot, and shows that Aston Martin are very deadly serious particularly in aerodynamics.

This from October 17th 2016 in an interview with Aston Martin about the Valkyrie in it's very early inception. I released a very little of it because there wasn't really any need. Now their absolutely is.

The unofficial figure of 4,000 pounds total downforce (track-only package) was whispered to me more in astonishment than confidence.

Theoretically the 2,200-pound 001 could drive upside down across the roof of a tunnel, held up only by the force of the aero.

"The key will be the car’s active suspension,” Newey says.

According to King, the 25 track-only copies of the car will be able to hold the line while cornering at up to four g of lateral acceleration.

Built of F1-caliber composites and alloys of unobtainium, the 001 will tip the scales at a mere 1,000 kilos (2,200 pounds dry weight, without fluids).

Straightline acceleration of 0 to 200 mph is expected to come in around 10 seconds.

The 001’s F1-style brakes should haul the car to a stop from 200 mph in about five seconds.

Reichman says “When you get to 1:1 power to weight, the world changes.”

At the unveiling in July, Palmer, the Aston Martin CEO, said that the track versions of the 001 would circulate Spa as fast as a Le Mans prototype racer—just under two minutes—at least 38 seconds ahead of the P1, which might as well be a million years from the driver’s seat.

Nothing to else to say except I've individually always been aware of her potential for an age and many of us have been. It's time to deliver.

The Dawn of the Age of the Valkyrie is upon us. It's going to be MAJESTIC.

Thank You so much! Beautiful shot no? :)

@Fastestlaps could you please use the initial picture from Evo Magazine as the main picture above please?

STILL no official acceleration statistics? Well we will just have to work something out based on previous manufacturer claims, for ONE metric and then compare them!

Topspeed roof DOWN is 205MPH and 217MPH with the glass panels intact.

VAG made billions and were fined billions for the very thing ...